A solo hunt with an 1840's-tech muzzleloader at the end of the Applegate Trail.

Dawn. That was the moment. Not earlier when it would be easy to blunder into a buck.

Legal dawn for this day in this part of the county was 6:51AM. Anytime before would be too soon.

I poured 80 grains of black powder into the muzzle then seated a 50-caliber lead conical with the ramrod. Then I slung my possibles bag and camera over my shoulder. Outside, I shrugged into my backpack, the shoulder straps for the ground blind and a chair in a carry bag.

Down in the corner of a woodlot, I set up the ground blind against a screen of blackberries and applied some of Scott Haugen’s doe-in-heat scent to a bush 50 yards out.

Deer would go to water in the canal and would walk trails along the canal road and the fence.

A soft wind cooled one side of my face and I tested it with soap bubbles. They fell to the ground and clung to the grass. I imagined the alluring scent pooling around the fence and hoped for just a bit of wind to carry the odor into the timber behind me.

Back in the blind now, it was a matter of a moment to cap the rifle and lean it in the corner.

Late in the season now, it was the first of December. In this part of southwest Oregon, the deer had been in the rut for over a month. Had I waited too long? 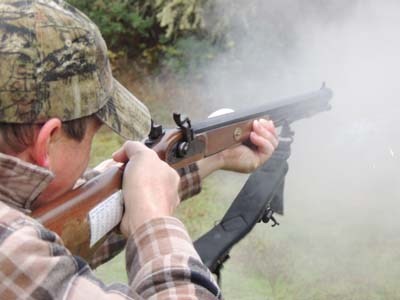 Jason Haley tries his hand with a 54-caliber Lyman muzzleloader. Loaded with 100 grains of powder, it shoots a 425-grain conical bullet. Sight picture is everything. Black powder, when it burns, throws a cloud of white smoke between the shooter and the target.

The End of the Trail
Whether I bagged a deer or not, this was the end of the trail. On the Applegate Trail, this was the end of it, here in the Rogue Valley. Oregon’s Applegate Unit is named for brothers Jesse and Lindsay who founded the important route into Oregon territory in the mid-1800's. The Applegate muzzleloader hunt is a fitting tribute to those pioneers. We use the same technology and components that were state of the art in their day.

It’s not a short season, but I had squandered some of it and this was my last chance.

My rifle had misfired on a nice buck on the first day of our hunt. It had taken several more days to get another chance. My friend James Flaherty had connected on a deer. My next opportunity came on a ridge top.

I kept the wind in my face, through patches of light and shadow, the rifle in hand, not slung on my shoulder. Bedded, the deer watched where I had been. I was thirty yards from the closest when it stood up, took a quick look and ran. All three were does, legal animals, but I would hold out for a buck.

Rainwater ran off the branches and filtered through long beards of moss. It was time to head for home, time for Thanksgiving.

Back in the Ford, the windshield wipers slapped back and forth. While my hunting partner basked in his success, I plotted the next move.

I had a note from friend Jason Haley when I arrived home. An accomplished high desert mule deer and elk hunter. He had insight into the movements of the local deer on his home turf.

I found three more days in my schedule and pointed the truck back to southern Oregon, this time to the eastern edge of the unit.

Late in evening, my headlights stabbed through an orchard as I went up the gravel road. In camp I studied a map and aerial photos. Before I crawled into my sleeping bag, a game plan had taken shape.

This 50-caliber Thompson Center is tuned for long-range accuracy with a peep sight and a fine front bead. Speed loaders, attached to the sling, make for quick reloads. Bill Herrick, of Bend, developed the loads for accuracy to 200 yards. The ballistic data is taped to the stock.

A Scent on the Wind
Out in the green hills, cattle moved. Birds lit in branches then flew down into the short fresh fall green-up. A tractor crawled across the side of a hill. Men went to work in nearby orchards.

Nothing mattered except for what might happen within the range of this muzzleloader.

When the breeze came up, a gentle puff that died out as soon as it was born, a deer grunted. Back in the trees. Like the croaking of a frog, but with urgency, it was almost a whisper. It moved from right to left behind me. With the screen of blackberries, I wouldn’t see it. I imagined he smelled what he wanted to smell.

Minutes passed and the long hand on my watch turned a quarter of a cycle.

There. It took a moment for unbelieving eyes to focus. The buck was at the fence line, at the bush doctored with the scent. He was sleek and gray and his antlers were polished, but not with the usual orange. This buck had been rubbing on fruit trees. Its antlers forked above the ears, a fourth point on one side. Forty yards.

Quartering toward me, the buck stopped and eyed the blind. Unable to move, I froze with the gun across my lap. For two minutes, he stared, then tensed.

When he started to turn, I thumbed the hammer and swept the rifle up.

Moving with the buck, I held the bead a trifle low for a four-inch differential in point of aim and stroked the trigger. 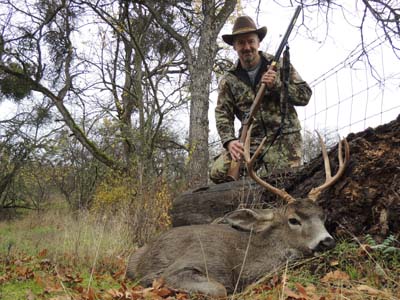 A lot of the rut activity had subsided by the end of November. This buck, though, was still trolling for does on the first of December.

Ignition! A white blanket of smoke was thrown between us.

I seated the rifle butt against my boot, poured down a powder charge, started a bullet and rammed it home with the rod. Twenty seconds. With a cap under the half-cocked hammer I started after the buck.

What I had seen through the smoke was its left foreleg, stiffened, off the ground.

At the top of the slope to the canal there was a long skid track where the right leg dug in. There. Broadside. The rifle floated up to shoulder and cheek-weld and the hammer dropped the long white curtain again.

In the 1840's and 1850's, pioneers trailed into this valley in search of gold and for land and their futures. I go there to carry a good rifle and find a buck like this one - a 3x4 rubbed out on pear trees, fattened and sweetened on the fruit fallen in orchards planted by pioneers.

For a moment the hunter drifts back, lost in the timeless mystery of the hunt. Then he hears a scrape of deer hair on bark and a branch broken by a hoof. There is a big blacktail to hunt. And footprints to leave on the trail.
Gary Lewis is the host of Frontier Unlimited, a TV show on Pursuit Channel and Hunt Channel.