Our hunt was all but over. On the morning of the third day, both of our hunters had tagged out with blacktail bucks, one taken on a ridge top at the edge of a bank of cloud, ghost-like in the mist. The other was on a ridge on the other side of the valley, in sunshine under a clear blue sky.

When my hunting partner (and TV producer) Sam Pyke, and I planned this trip, we had both applied for, and won antlerless tags that allowed us to take either an antlerless deer or a buck with spike antlers. In Oregon’s controlled hunt drawings, these are the 600-series hunts.

In my family, we try to eat nothing but wild meat and the steaks and burger from a blacktail doe can feed us for most of a month. We are more efficient feeders than a mountain lion that might kill a doe and need to kill another within the week. 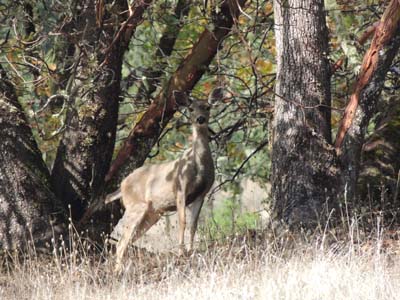 A blacktail doe in oak savannah habitat near Roseburg, Oregon.

This hunt started out with friend and guide Lee Sandberg, of Black Oak Outfitters, leading the way. We scouted and glassed and turned down some early opportunities. I had a glimpse of a very, very good blacktail buck trailing a doe in thick poison oak cover, but it was gone before I could point it out to Dan. Our friends Dan and Debbie Goetz, owners of Warne Scope Mounts, in Tualatin, Oregon, took blacktail bucks on this hunt, and Sam Pyke tagged out with an antlerless doe. Last in line, it was my turn.

The sun had started its slide and the shadows began to lengthen. In the F-150, Pyke and I rumbled along the bumpy river road, a drive of about two miles toward a knoll where we had seen deer the evening before. Anticipating this excursion, I had distributed doe-in-estrus scent in various locations the evening before. The formula comes from Scott Haugen, friend, fellow scribe and one of the foremost blacktail deer authorities. Working with Oregon-based Pro-Cure, he has introduced a gel formula that lasts longer in the field.

After crossing the second creek, we came to a dry stream bed. Uphill to our left, but inside the banks of the creek, I spotted a blacktail doe, with another behind it, followed by a spike buck. This buck was bigger than the normal 1-1/2-year-old spikes we see a lot of in this low-lying river country. He had his head down, neck stretched-out, low to the ground. His head, bearing spikes more than a foot in length on each side, was a legal one in our antlerless hunt. 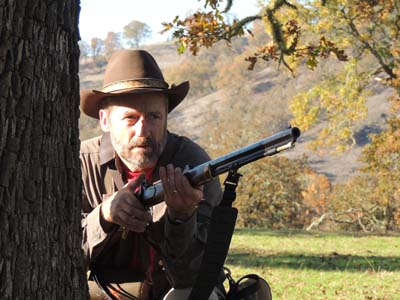 Lewis with his 54-caliber Lyman, his choice for a recent antlerless hunt in western Oregon.

I slipped the muzzleloader out of its case and, and with Sam behind me, we began the stalk. The buck was on the move now, headed away from the river, up into oak forest. Well-browsed here, the flora offered little in the way of cover and, while moving from one tree to the next, the buck spotted me. There was a moment when I could have taken the shot, with the hammer eared back, but I held my fire and watched the buck, which I guessed at a 2-1/2-year-old, trot up through the trees, his flanks flecked in oak leaf shadow.

And I was not sorry. I prefer to take a doe in an antlerless hunt.

According to the regulations, a hunter can use any type of legal rifle, handgun, shotgun or archery equipment in Oregon’s 600-series hunt. I could have used a modern muzzleloader if I had chosen to, or a a scoped percussion gun like some post-Civil War buffalo hunters – illegal by Oregon’s muzzleloading-only rules. I selected a Lyman 54-caliber Trade Rifle, of the sort employed by farmers and frontiersmen in the 1840s and 1850s. 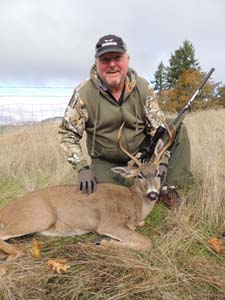 A herd of whitetails fed out along the river and we spotted a Columbia whitetail doe with an eager forked horn behind her. It wouldn’t be long before a bigger buck ran the little one off.

Up on the knoll I spotted a lone blacktail doe and after a short stalk, closed the gap to 40 yards. Rested on a knee, I eased the hammer to full cock and stroked the trigger.

There was a “bang,” but it was a quiet sort of bang. The fall of the hammer fired the cap but not the load in the breech.

I re-capped and re-stalked the deer to 20 yards, and re-cocked. As soon as the deer offered a shot again, I pressed the trigger.

Click-boom! This time the gun belched smoke and danger, but between “click” and “boom” I’d managed to drop the muzzle enough to miss the deer.

Startled now, the deer ran first one way then the other. I had a speedloader attached to my sling. In 20 seconds, I was reloaded and re-capped. The deer, fully informed of the danger now, ran broadside and I swung the rifle with it and touched the brass crescent. 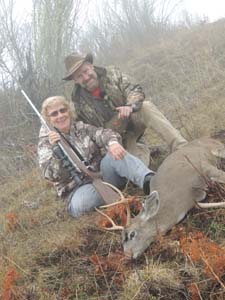 Debbie Goetz tagged her first blacktail deer with a well-placed shot taken on the edge of a fog bank. Debbie was an early adopter of the 6.5 Creedmoor and has taken all of her big game with this cartridge.

This time the explosion of the cap and the ignition of the powder blended in a sweet punch at my shoulder, flame at the muzzle and a long plume of white smoke. Swinging with the animal, I was sure of the shot.

The deer ran headlong then pitched over a cliff toward the river. We picked our way down through poison oak and collected the prize. My second shot had gone true with a 54-caliber hole complete pass-thru.

Game and Fish departments around the West offer antlerless tags in areas that might have more deer than required to meet management objectives. Tag numbers go up and down based on the harvest priorities, but the person who wants to spend more time in the field, or put more game in the freezer, can take advantage of the surplus.

Antlerless deer hunts bring their own sorts of challenges, not the least of which come from the limitations of the chosen hunting tool.

Opt for a muzzleloader next season and relive, for a few moments, the days when a hunter had one chance to make one good shot. And learn to reload in a hurry.