Stalking the swamps with stick and string. From one side of the country to the other.

Last spring and summer I made it a priority to go bowfishing several times and that goal found us stalking the swamp with stick and string in Oregon, and all the way across the country, in Florida, in Indian Lagoon. My kids got addicted to bowfishing too. Which is a good thing. 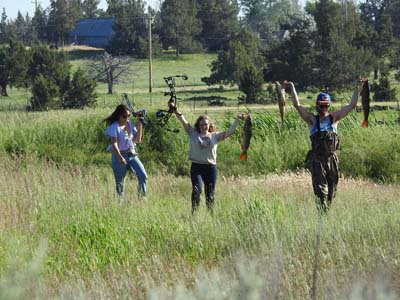 In May and early June, the carp in these parts - I live in Central Oregon - cruise into the shallows, their fins showing above the muddy water and will swim into tall grass when the water is high. And when we time it right, we can put on wading boots and string our bows.

We timed it right. The carp were up in the grass. It looked like we were walking through an uncut lawn, the grass knee high, the water shin deep and dorsal fins visible to a close inspection. 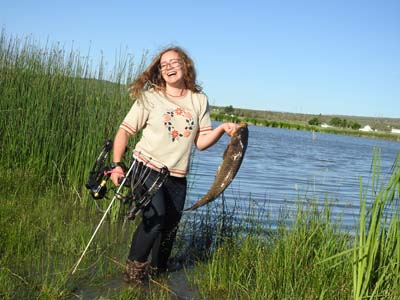 My daughter Tiffany (28), my daughter Mikayla (22) and several friends - Chris Lewis, Chase Lentenmaier and Brooke Murphy took their bows and splashed in. My girls didn’t need my help, they had played Hunter Dan’s Bowfishing Survival Gauntlet video game for years.

They spread out and tiptoed through the tall grass and made their kills.

The carp, as big as 10 pounds or more, when spooked, bulled through the rushes like bison. 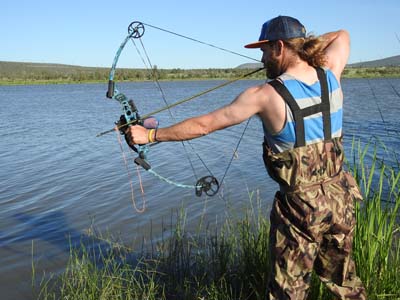 And like ancient buffalo hunters, the kids took their quartering shots and missed and collected their arrows and shot again. If they thought the video game was good, this, the real thing, was great. 30-something Chris Lewis, out of breath, with a carp on the arrow, turned to look at me and said, “This is the funnest thing I have ever done.”

There are things you don’t do, and one of those things is crawl around on aluminum boats in the Indian River Lagoon when lightning is flashing all around. But when the big booms are mostly too far away to hear, maybe you have a chance.

“Getting struck by lightning in and around Orlando,” one guy told us, “is much easier than winning the lottery.” And we were right there where the storm clouds build off the Atlantic, above the ivory walls of the Kennedy Space Center.

The air is charged, a humid motionless mass.

Lightning is the occurrence of an electrical discharge of high voltage between a cloud and the ground or a cloud and another cloud. Lightning strikes often from cumulonimbus clouds.

In a lightning storm, any aluminum boat should be thought of as a positive atomic nuclei surrounded by a fluid cloud of electrons. And aluminum is a fine conductor of electricity. I used the hair on the back of my neck as an indicator.

Our final frontier, at least for the ragged end of this trip, was the shoreline of the Indian River Lagoon. 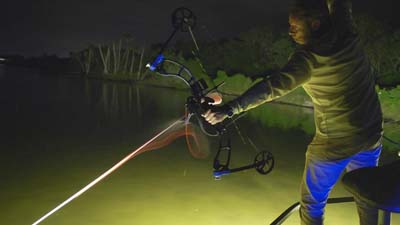 We would fish with Captain Josh Padrick, of Central Florida Trophy Hunts (gatorhuntingequipment.com). But we had to wait for the lightning to move off. And we waited, and we checked the radar and waited some more. Then the wind began to lay down. It was past 10:00 and it was time to hunt. The danger, it seemed, had passed.

Our ride for this late evening run was a 22-foot Tracker with a 150-hp Mercury. Up front, with a bank of batteries and a generator to power them, the way would be lit with huge halogens. A Minn Kota on the bow provided the stealth propulsion.

Out of the chop and out of the wind, we slipped across to the Titusville side of the wide mouth of the Indian River, and soon the bottom of the bay came into focus. We were in two feet of water, with Captain Padrick leaning against one of the front seats, the remote control for the motor on a lanyard around his neck.

Mullet flashed one way and another, quicksilver streaks above the surface. From time to time, larger fish were seen at the edges of the light. But we were looking for three types of fish: sheepshead, striped like zebras and about 12 inches or more, and flounders and rays. The flounders might go as big as four pounds, but the rays, as I well knew, could be large.

The larger the better. 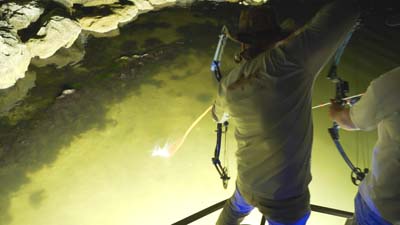 Leaned back against one of the bow-mounted seats, I held a compound bow with a barbed fish arrow collared to an orange cord. A reel mounted opposite the roller rest would serve to reel the arrow back in and store the line inside a canister.

Arrows nocked, we stayed just a few feet off the shoreline in the shallow water.

“Nope.” But then I did see it. A candy-striped fish lay tight to a rock.

Fast as thought, I drew and released. And when the mud cleared, my arrow was stuck between two rocks, right next to the spot just vacated by a sheepshead. We motored on into the dark, the lights on the bow illuminating the floor of the lagoon.

At the water’s edge, a rat scampered in the rocks and I briefly flirted with loosing an arrow at it, but the thought of taking it off the shaft was enough to make me look for fish again.

One of the tricks of shooting a fish in any depth of water is to compensate for refraction. I shot two inches low and three inches low and almost every time I missed high. But I was missing close, usually within an inch of the inch-and-a-half target area.

And then we found the flounder, a critter like a halibut, but smaller. This target was the size of a dinner plate. I missed that one too. 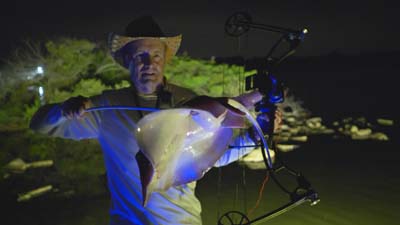 We slipped along a rocky shore and cut across to the edge of a cypress swamp with palm trees that grew right down to the water’s edge. In the dark of the night, the halogens bathed the scene in an otherworldly glow of greens and gold. My white shirt was green, my pants were green and as a bowfisherman, I was green. Then there was a ray in the sandy bottom. And I was golden.

First, there was its head and its barbed tail and, knowing how rays are shaped, I imagined wings. And the arrow was back, and the arrow was loosed and the prize was struck. The arrow plowed away with the ray, the fluorescent orange line marking its headlong flight.

Holding the clutch of the reel against the bow, I brought the creature back to me.

We took turns shooting and although Josh was much more skilled than I, he missed just as many times. And we took more rays till I had accounted for three rays and missed twice that many sheepshead. It’s a rush. 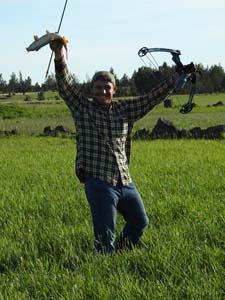 To get started bowfishing, it is easy and cheap to add a reel to most modern recurves and compound bows. Sportsman’s Warehouse offers fish arrows, fish points, reels, and fishing lines. I recommend using a white arrow and fluorescent orange line for high visibility. To convert a bow for fishing, consider a roller rest (like the Cajun bowfishing arrow roller rest) and a reel like the AMS Bowfishing Retriever Pro or Cajun Winch Bowfishing reel.

Gary Lewis is an award-winning outdoor writer and host of Frontier Unlimited on TV. Contact Lewis at garylewisoutdoors.com