A young dog learns her way around the duck blind.

We wadered up in Dave Rogers’ seed barn. He had a sweet black Lab named Annie that knew she was top dog. When she met my pudelpointer, Liesl, she had to prove it. They had a little scrap and after the pecking order had been reinforced, everyone got along fine.

Rogers calls his place River Refuge. He plants crops to encourage the birds to feed year-round or stop on their migrations north and south. Situated close to the Willamette, located just out of Brownsville, Rogers’ refuge feeds a lot of birds. On Wednesdays and Saturdays during the season, Rogers and his friends go out to blinds situated on various points on the property and try to harvest a few. 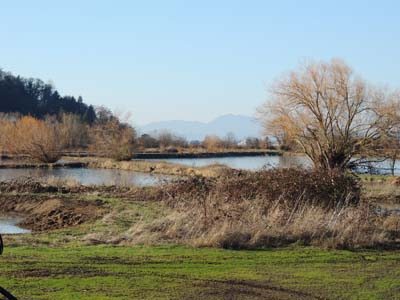 The landowner created a private refuge that attracts birds from all over the valley.

Most of the blinds are built for two. Some will fit three. We had four: Kristy Titus with her 20 gauge, Troy Rodakowski with his 12 gauge, Sam Pyke who was shooting a Canon camera and me with my side-by-side. Four, plus Liesl, the pudelpointer.

In the dark before dawn, we negotiated a narrow dike road between ponds and held our breath each time the truck slid in the mud and ice. The ponds were iced over, but the hard water wasn’t hard enough to hold more than a 40-pound dog. I know that because, Liesl weighs 48 pounds. 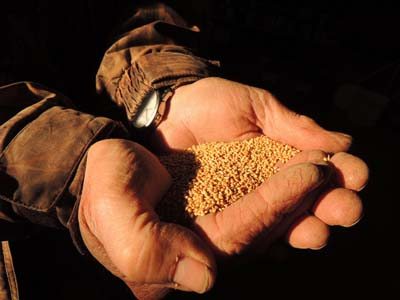 Seed production encourages waterfowl to keep coming back for more.

We climbed into the blind, wedged shoulder to shoulder. Liesl, if she had hunted ducks before, would have known that we sit, we wait, we watch. She wanted to go point birds, but pudelpointers are supposed to be versatile hunters.

I had to hold her down with one hand and whisper encouragement. Thus occupied, I sat on the right side of the blind. Troy was on my left, then Kristy, then Sam.

The sun came up. Geese gabbled out on the shallow lake to the west. We began to see flights of ducks. Liesl lay on the ground and watched birds go overhead. She swiveled her head at every tweety bird that flitted by, at every mile-high V of geese and watched teal and wigeon streak by, close but not close enough. 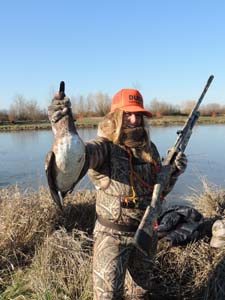 Left-eye dominance presents a challenge for wing-shooting. Kristy Titus wore glasses most of the morning with the left lens taped up to force the right eye to do the work.

Kristy had the left panel of her sunglasses completely encased in Scotch tape, kind of like the crust of ice that covered the pond in front of us. It’s one of several tricks cross-dominant shooters can use when hunting right-handed. She shoots right-handed, but her left eye is the dominant. By Scotching her glasses, she forces her right eye to do the work.

There wasn’t a lot of work to do. Then the geese got up off the lake. Like a ponderous blanket flapping against the sky, a cloud of cacklers lifted off the water, above the trees, blackening the sky to the east.

They broke apart in tens and twenties, headed different directions, then two geese split away from the rest and headed straight for our pond. Liesl’s eyeballs almost popped out of her head as I held my hand on her to keep her from giving us away. The birds circled, then they were over the blind and Troy and Kristy stood up. Troy fired and one of the birds crashed.

Whack. I heard it hit the ice on the pond behind us. 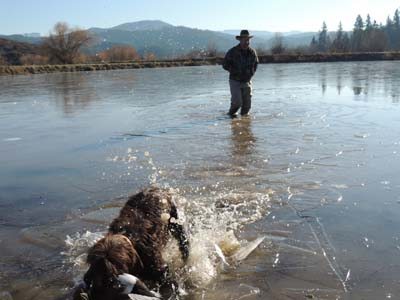 Breaking the ice to retrieve a widgeon on a pond near Brownsville in Oregon’s Willamette Valley.

Now it was time for a lesson in retrieving. My 48-pound dog put her foot on the 40-pound ice. A long crack shivered out away from her toward the goose 20 yards out. I had to walk alongside to break the ice.

Waterfowl smell a lot different from the quail and chukar and pheasant this dog is used to. She got a sniff of that goose and knew she was supposed to do something. She nipped at the wing, jumped back and nipped again and jumped back, but finally got the 12-pound bird in her mouth and started her way back to dry land. 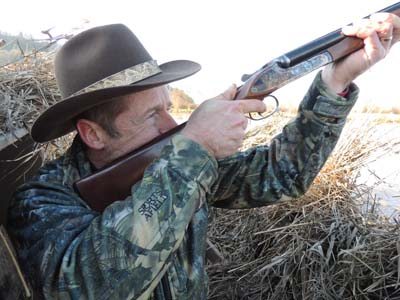 The temperature presented challenges - The water was too hard for ducks to land and the decoys froze in place. And the clear blue sky allowed the ducks to circle from out of range while they inspected the approach.

Back in the blind we watched our forlorn decoys and decided we needed to encourage the birds that went by so far overhead with a little open water. Troy and I tromped out and stomped the ice back to water around the decoys. And as we were headed back to the blind, several flocks of ducks flew over and flared when they saw us. Better educated, they flew off in search of a safer place for breakfast.

The hour hand marched around the dial twice and was headed for its third revolution. I had to wedge the dog behind me now. She wanted to get out and run, not wait for them to come to us. Every time I moved, she leaped out.

Then, all of a sudden, we had 40 teal in front of us, a whirling, spinning, flashing wall of ducks, all 10 to 15 yards out, going right to left. Troy swung and fired then Kristy shot next. When we reviewed the video later, we saw five ducks fall to Troy’s shot. Kristy’s was out of frame, but we retrieved six birds.

There in Brownsville they filmed a coming-of-age movie about four buddies. You can walk across a bridge and see other places made famous in the ‘80s classic. I didn’t see the movie, but I taught the dog to stand by me.