Two months to sheep shape for a 13-year-old hunter.

Jason Kamperman took a screenshot. According to the ODFW app, Kamperman’s son Reed had drawn a sheep tag in the Steens. He shut his phone down, waited a minute, and powered it up. He checked the app again. Same thing. Sheep tag for the boy. August.

Jason’s mind raced. It’s hard for a fireman to take 11 days off in the middle of the summer. But not impossible.

Thirteen-year-old Reed Kamperman was at a friend’s house, playing a video game when Jason walked into the room.

“Game’s over.” Jason put the phone in front of his son. Not only had the youngster drawn a sheep tag, he drew the very hard to get Warner Unit youth tag for mule deer.

The teenager said he was stunned, but then his mind began to race. He had been in the Steens the year before.

“I knew how hard it was going to be.”

What he didn’t realize was the importance of this once-in-a-lifetime tag.

That idea began to seep in after the first scouting trip with friends and family from central Oregon, including Mike Chamberland, Wayne Chamberland, Chris Clark, and Randy Parrish (Reed’s grandfather).

Jason, 49, who is a mountain biker, a runner and a skier, began to get up before work everyday to get into sheep shape. And Reed, a middle school football player and a wrestler, started on a fitness plan which included regular trips with a pack up Bend’s own extinct volcano - Pilot Butte.

From mid-June through the first of August, the Kampermans made five scouting trips. 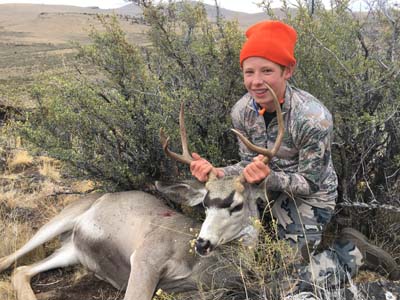 For this hunt, the Kamperman’s chose a bolt-action 7mm-08 and the 140-grain Nosler AccuBond. Twice a week, Reed shot the rifle, learning the holdovers at 200, 300, 400 yards, and beyond. Jason was careful to see Reed shoot at closer distances too.

Five days before the season, the Kampermans set up camp in the desert. One day it rained, the next day brought snow and then sun. Before long, the crew had several bands of sheep spotted, but the day before the season opener, the sheep disappeared.

By day 4 (day 9 of the trip), the midday temperature hit triple digits. 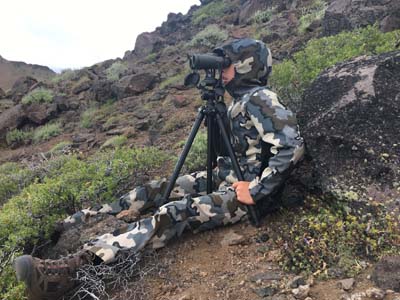 The crew had spotted two very good rams and Reed wanted to hunt them from the top down. To get there, father and son took a bumpy, winding road up the slope, then stopped, hiked over and started down.

The younger Kamperman stopped and looked down. An arrowhead. He picked it up and looked it over. It was almost complete, with a slight chip on the tip. A few days before he had found a Nosler cartridge another hunter had lost, both artifacts left by hunters who had gone before him. But to the 13-year-old, the goal was to see the rams he had spotted from below.

On hands and knees, father and son looked over the rim and into the basin below. Two rams were feeding in a small grove of aspens that had survived the fire that had scorched the junipers all around. 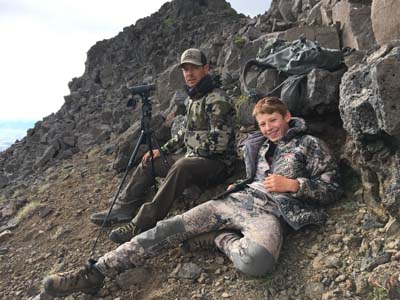 It only took a glance to see which of the animals was biggest. Reed tipped the scope caps open and settled the crosshair. One of the hard things to remember after months of practice shooting on level ground, is the hold to take when the angle is steep, uphill or downhill. Reed’s first bullet went over the big ram’s back. And when the ram ran a little-ways and stopped, Reed shot and missed again.

Two downhearted hunters found no sign the ram had been hit. Now the temperature was close to 100 °F.

Two hours later, father and son found the big ram again, one canyon to the south. Jason spotted it first. Not more than a hundred yards away.

Reed eased his rifle up around a boulder and settled the bipod in a notch where, in times past, a young hunter might have drawn a sinew-backed bow and loosed an obsidian-tipped shaft. The ram was quartered toward him.

“Aim right in front of the shoulder,” Jason breathed. 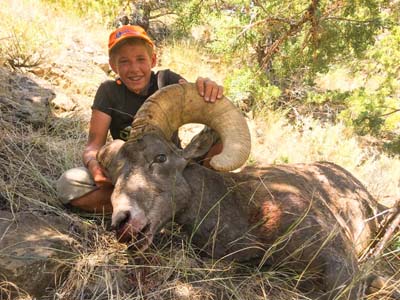 Reed tipped the safety to “fire,” settled the crosshair low on the shoulder and squeezed three pounds of pressure on the steel arc of the trigger.

Struck, the ram ran headlong, tripped and rolled 50 yards down the slope, coming to rest against a juniper.

Minutes later, Reed knelt beside his Steens Mountain ram and ran his fingertips around the curl to trace the growth rings.

Thirty-one days later, back in southeast Oregon, the young Kamperman settled his sights on a three-point mule deer and filled that tag as well.

The young Kamperman may never have a summer hunting season like this one again, but he will have a wealth of experience to draw upon and discipline learned on his feet and on his belly in the Steens and the Warners. 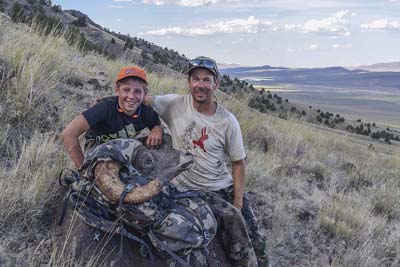 It can happen. Any hunter who applies can draw a bighorn sheep tag. Everyone has an equal chance in the random drawings available in many western states. The thing most hunters don’t understand is how little time there is to prepare between mid-June and mid-August. If a person thinks they are in good shape, they also have to be mentally tough. A lot of hunters quit before they get into the places sheep live.

“It’s tough,” the 13-year-old said. “You have to get in really good shape. Even with the shape we were in, it was pretty hard and brutal.”