While taking an elk in Oregon or Washington is never a cake walk, some tags are easier to draw and some units are much more hunter-friendly.

Here in this valley, we are like the last line of defense to keep the elk out of the next valley. If they get down there into the orchards, it would be chaos.”

My friend Dale, the property owner, waited for my dad and me on the gravel road. Through a screen of 30-year-old evergreens, we could see tan and chocolate shapes on a grassy slope, framed against the dark greens of a tree plantation.

Dale’s property is on the edge of the Coast Range, outside of Yamhill and Carlton. Uniquely situated, Dale sees his land as a buffer that attracts elk out of the high country but keeps them out of the next valley below. 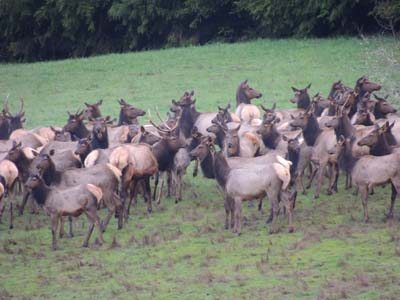 Roosevelt elk in the foothills of Oregon’s Coast Range. When scouting an area, consider the habitat. Studies show that elk thrive in environments characterized by early- to mid-growth timber. When mature stands of trees dominate the landscape, the carrying capacity of the land is diminished.

There are almost too many elk. When I looked at the pictures later, I counted 50 animals in the herd.

“This is one of three herds using the valley,” Dale whispered as we ghosted down through the trees.

We crossed a small stream then set up at the base of a low ridge to glass up the hill. The animals were strung out along the top of the ridge. Some were bedded, some were on the move. Two spike bulls sparred. The lead cow already had us pegged. She stared into the trees.

Dale took out his range finder. “Two-hundred-eight yards,” he whispered.

This was a damage control hunt. The landowner can get tags from the Oregon Department of Fish and Wildlife. Together, the biologist and landowner determine how to protect the elk and property by removing a few animals from the herd. 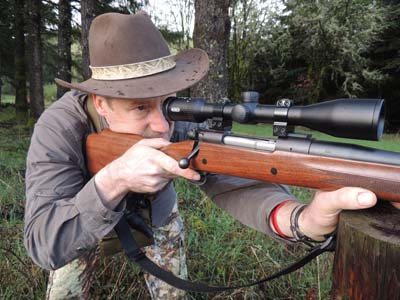 A short stalk through a stand of timber allowed for a rest on a fence post and a 230-yard shot.

It was time to do the trigger-nometry. I’d just sighted this Montana Rifle at the COSSA Range east of Bend the week before. It had a new Meopta scope on top and a 180-grain Nosler AccuBond in the chamber. The first shot on a cold barrel would strike two inches high at a hundred yards. At 200 yards, I should hold right on. I slid into position and rested the rifle on a tree limb.

The lead cow turned and the animals began to follow. There was an elk at the back of the herd and when there were no other animals behind it, I let the crosshair drift behind the shoulder.

“Two-hundred-thirty yards,” Dale whispered. At the shot we heard the bullet strike and saw the herd flow together up the hill then circle down into the valley. There was a young branch-antlered bull in the group.

All around us timbered ridges fed down into the narrow valley. The green grass was like a magnet for these big Roosevelt elk. It was easy to see how these 40-or-so females would multiply in June when another 20 calves would hit the ground on wobbly legs. More elk means more mouths to feed and more fences broken. And, if they are not kept out of the vineyards, the hazelnut orchards and the seed plantations, then destruction follows. 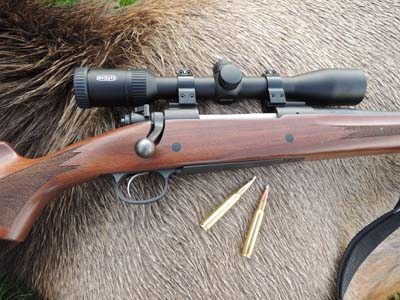 There might be no such thing as an easy elk, but in every western state there are hunts designed to reduce elk numbers to minimize crop damage. Such hunts offer a better chance to tie a tag on an elk. And there is no better way to fill a freezer with good, organic steaks and burger.

We hung the elk, skinned it and then, at lunchtime, drove down into Carlton for sandwiches in a wine tasting room. The roast beef was very good, and the water I drank, on the rocks, had been filtered down through Oregon’s coast range. I suspect their wines are just as good.

The elk we trimmed up with our knives and readied for the butcher had dined on verdant Yamhill County grass. Grasses would have made up about fifty percent of its diet. It would have eaten flowering plants, fiddleheads, weeds, leaves, the new growth on salmonberry bushes, blackberries, huckleberries and nibbled on mushrooms and mosses. Every day an elk has to put away about 20 pounds of groceries.

Because Dale is committed to the wildlife, he protects the hazelnut orchards, grapes and clover seed fields in the next valley.

Dale and his wife Jenni love the elk on their property, those great troublesome animals that break down fences and trample gardens. “They have to eat someplace,” Dale said. “We like to coexist with them.”

WASHINGTON
The State of Washington recognizes 10 main elk herds. These are the Selkirk, Blue Mountains, Yakima, Colockum, North Cascades, North Rainier, South Rainier, Mount St. Helens, Willapa Hills and Olympic herds. Some herds are at management objectives and others are decreasing in size. The state is allowing room for increase in others. Statewide, elk populations are estimated at between 55,000 and 60,000 animals.

Of the 11 western states, Washington has the highest number of hunters per elk and the highest human population density of all the elk states.

For all weapon types, the general season hunter success rate was 7.9 percent in 2014, the last year for which the data was available. Broken down: 6.8 percent hunter success for modern firearms, 10 percent for archery, 9.4 percent for muzzleloader.

The hunter looking for an easy elk is more likely to find it in areas with more animals, attendant agricultural damage and fewer hunters. Special Permit Seasons offer the highest harvest percentages with a 2014 statewide success average of 31.3 percent. For an easy elk, focus on Washington’s Special Permit seasons. 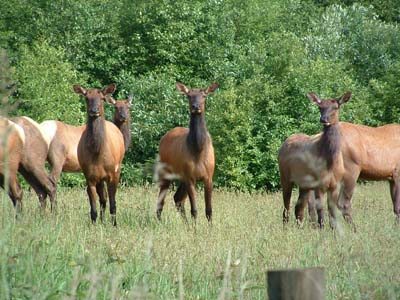 OREGON
For Oregon hunters, statewide elk hunt harvest success averages between 11 and 14 percent. According to population estimates there are 74,227 Rocky Mountain elk on the east side of the state and 41,550 Roosevelt elk west of the Cascades.

In eastern Oregon, the Fossil and the Lookout Mountain units are among the easiest places to draw an elk tag and find high numbers of elk. The trouble is these units are made up of a high percentage of private land. In the Fossil Unit with 14 percent public land, if you don’t have access through a guide, or gain landowner permission, the elk are going to be anything but easy.

Antlerless hunts are used to keep herd levels from growing out of balance and to control damage complaints on crops and ranch lands. The best bet to raise the odds in an antlerless hunt is to gain access to private land or find public land adjacent to private croplands.

For data on specific hunts, visit the ODFW web site at www.dfw.state.or.us/resources/hunting/big_game/
Not coincidentally, these “easy elk” hunts are a great draw for another kind of hunter. Elk country is black bear and cougar country. Don’t go afield without a bear tag and a cougar tag. You have a chance to bring some relief to the local elk herd and pack home a unique trophy.

Wherever the elk hunt takes you, pre-season scouting increases the odds of success. When the hunt starts, spend the first two days in open country, where you can watch well-traveled trails. On the third day, predict the elk behavior as the animals adapt to hunter pressure and the weather. Your easy elk is out there; plan on spending most of the season to find it.