PacWest Outdoors: Elk: Back in the Blues with an Army Veteran

"After I got back from Iraq, I didn’t want to hunt for a long time.”

A lot of things change for a soldier back from war.

“After I got back, even most music, I didn’t want to listen to.”

It was a time to heal.

Kyle James, who makes his home in Oregon City, is a soft-spoken 30-year-old who used to sit in the turret on an armored Humvee with his finger light on the 240 Bravo trigger.

We hunted with him in the Blue Mountains in late August. 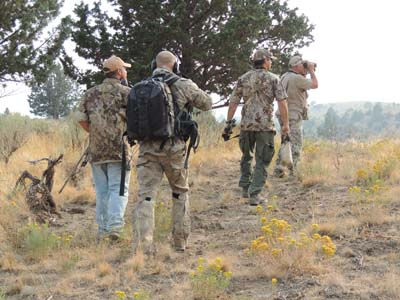 There were six in the party: James, Freeman, Jake Carse, landowner Brad Andrews, Sam Pyke and me. We met in Unity at the Water Hole Tavern and planned the hunt over dinner. We found out James had grown up in Baker County. It turned out that Andrews knew his family.

Andrews and Freeman had arranged a damage control tag for elk on Andrews’ property in this corner of the Blue Mountains. 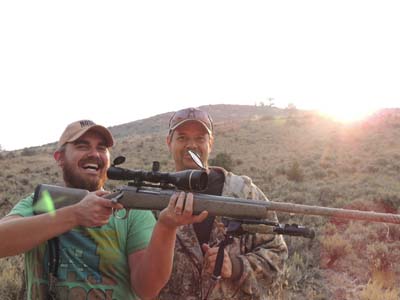 Army veterans Kyle James and Phillippe Freeman practice with an unloaded rifle prior to an elk hunt in the Blue Mountains.

James would use Freeman’s rifle, a long-barreled 7mm Remington Ultra Magnum, topped with a Leupold scope and equipped with a bipod.

“I knew I was ready to go hunting again when I wanted to go shooting again.” That happened last spring, James said.

The IED that blew his Humvee into the air was hidden in a manhole and detonated with a walkie-talkie when the rear axle was over the bomb. The blast flipped the vehicle 2-1/2 times. James was thrown 151-feet like a rag doll in the same trajectory and he landed right in front of the vehicle. If the vehicle had rolled one more half-turn, it would have crushed him.

The doctors told him later he had a concussion, two broken ribs, collapsed lungs, a broken hip and internal injuries. He came out of his coma back in the States and redeployed the following summer.

Phillippe Freeman is a veteran of Operation Desert Storm. Today he is a dentist in Bend, Oregon and something inside told him it was time to reach out to a younger Army vet and help him or her readjust.

He told Brian Davis and Brian Davis told me and I called Jake Carse from Home with Heroes. Carse told me about James and soon a plan was hatched.

Under a Lemon Sky
We cut the tracks of a big herd late in the afternoon and worked our way up to a hay barn that commanded a view of the bottoms of three canyons. The six of us clambered up the stacks of hay and crawled on all fours under the low ceiling to take up positions in the corners.

There were two fires in the immediate vicinity and we could hear the helicopters working the mop-up of the Eldorado and Cornet-Windy Ridge blazes in the distance.

With the sun in the west, the mountain valleys and the tops of the yellowed grass were lit with an orange glow. We sat with our binoculars to our eyes and peered into thickets with the longer glass of the spotting scope.

Shadows grew longer and mule deer filtered out of the canyons. We glassed into patches of juniper and aspen, we counted bucks in the alfalfa and took turns napping.

I snapped awake at 7:15 and saw a deer come down a ridge. Right behind it, I saw chocolate-colored ears above the tops of the sage, silhouetted against a lemon-yellow sky. 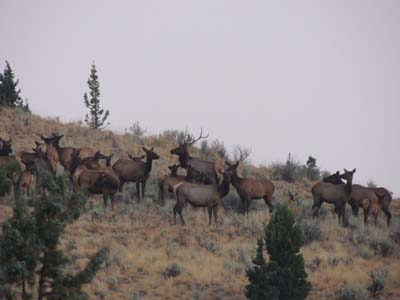 Elk on a hilltop in the Blue Mountains.

“Elk,” I whispered, and that set off a scramble inside the hay barn as Freeman and James moved into position.

To get to the side of the barn, Freeman and James had to cross a four-foot void between the hay bales with an eight foot drop below them if they slipped. They managed to get to the other side and set up at the edge of the barn.

The lead cow had sensed something amiss, but there were so many hungry elk in the band, they didn’t pay any heed.

Elk streamed off the top of the hill, in ones and twos and knots of six and seven. We could see more coming down the hill.

Kneeling, both men’s eyes were on the elk and neither one saw the corrugated steel of the lower roof jutting toward them. Getting into position, the long rifle barrel tapped against the steel.

Clank. It was loud in the calm air. Several elk looked up and one knot of animals moved out of sight.

Using the corrugated steel for a rest, his hand balled beneath the rifle, James was on the trigger, Freeman beside him. The rest of us held our breath.

There were two spike bulls on the slope before us, two branch-antlered bulls were in the group knotted at the top of the hill. Elk milled on the high slope while the elk resumed feeding in front of us. All told, we could have counted close to 120 elk in the herd. 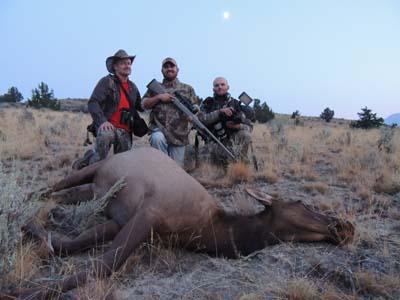 “Pick out a lone cow,” Freeman whispered. A shot crashed in the stillness and a few elk broke downhill for the open alfalfa fields, while the rest of the herd bunched on top of the ridge. We clambered down out of the hay and started up the hill to claim James’ prize.

At the end of it, under a sliver of moon in a smoky sky, James flashed a wide grin. He was ready to start to work on his first elk, to put the nutritious, wholesome meat aside for his young family.

Healing takes time. For this young Army veteran, the road back to the Blue Mountains had been long and hard. Welcome home, Kyle James.

Home With Heroes
Home With Heroes is a Northwest-based non-profit organization. A grassroots effort, the group is made up of fishermen, hunters, members of the community and like-minded sponsors who make it possible for veterans to experience hunting and fishing hosted by volunteers. Events include a banquet, bird hunting, deer camp, a golf tourney and a 5K Run & Gun. www.homewithheroes.com