Mike Carlson pushed away from the primitive launch and dug in an oar to allow the current to turn the boat in the muddy water. Brown water swirled at the blade of the oar. 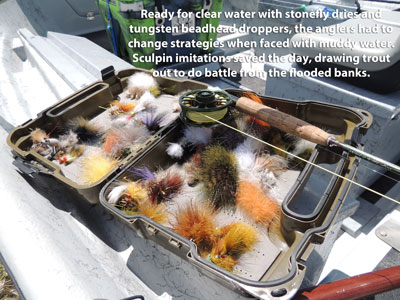 “If this wasn’t your only chance to fish it, we’d have canceled today,” Carlson said. Aaron Bible and I strung our rods and poked through our fly boxes.

I tied on a Stimulator, but quickly switched to a streamer called the Sex Dungeon, an olive baitfish imitation with lead eyes and two hooks. Then Carlson said something that stuck with me.

“These are the laziest trout I’ve ever seen.”

Lazy trout like to hang out in slow water. And the only slow water I could see was in the shoreside grass.

Running through low pastureland that at one time had been beaver marshes and willows, the river wound back and forth with sometimes no more than five yards of dry land between one twist and another.

Standing in the bow, I hammered casts to each inside corner, to each downed tree or tangle of beaver-chewed saplings. Out of a tangle of limbs, I coaxed an 11-inch cutthroat.

When I lost the Sex Dungeon to a willow branch, I tied on a heavy black streamer with blood red gills and UV mylar. 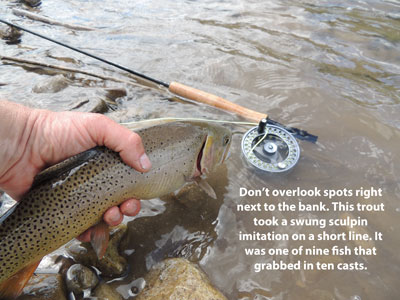 From a grassy bank, I hooked a fish that ripped line off the reel, bulling downstream in the fast, brown water. When it showed itself for the first time, it thrashed at the surface, its yellowed flanks showing big dark spots – a brown trout. When its head was up, Carlson stabbed for it with the net.

If we had put the tape to it, the fish would have measured 20 inches or better. I cradled it alongside the boat. When it was free, it splashed water in my face.

When heavy snows begin to thaw in the mountains, when a week of spring rains muddy up the creeks, the visibility drops to a few inches. The chances of a trout keying on a dead-drifted mayfly or stonefly are almost nil. That’s when it pays to tie on a streamer. And if the fish are lazy, like I hope they are - big, fat and lazy - they want maximum payoff for their effort. That’s why I went with the big olive sculpin imitation to start.

Sculpin make a living on the bottoms of rivers and when they get caught up in the current, they are vulnerable. Sculpin know it and trout know it. With erratic evasive action, they can get back to the bottom and to safety.

Start with a rod that can throw a heavy fly. A 5-weight or a 6-weight is a good choice. I was using a 9-foot, 5-weight with a fast action to the tip. The fly had sufficient weight to take it six to 12 inches below the surface.

For throwing streamers, a longer leader may not be necessary and in brown water, fish are not leader-shy. Cut down to a length of five- to seven feet with sufficient strength in the tippet to turn the fly over on the cast.

With a shorter leader, it is easier to hit a target with a big fly. The targets are along the banks. Mouths of creek tributaries. Log jams. Boulders. Empty spots in a bank of tules or cattails or in the willows that line the banks of a brushed-in stream. Such voids hold trout when there is a back eddy to slow down bits of protein swept along with the current.

Direct casts close to shore, splashing down in the grasses and bouncing off boulders. Then let the fly swing. 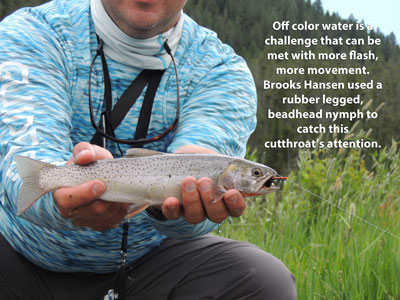 When a rainbow, a brown, a brook or a cutthroat chases down a swung or a stripped streamer, it makes the grab then turns to seek once again its place in the current. It’s easy to set the hook at the strike and pull the fly out of the fish’s mouth. Especially when the fish has shown itself.

Instead of striking when the fish eats, drop the rod tip toward the fish or let it take a bit of line. My rule is to give a fish at least 50 percent of its length when it takes a wet fly. For instance, if I expect a 24-inch trout, I let the fish take 12 inches of line on the grab.

Set the hook toward the bank to pin the fly in the corner of the mouth.

Back in the boat again after a shore lunch of “street” tacos on a Camp Chef stove, we found the only tributary that didn’t have a wall of mud in it. This called for the backup rod, which was rigged with a floating line, ten feet of leader and 18 inches of light tippet. A few mayflies struggled on the water and we discovered we had their imitations - gray drakes in No. 12.

This tributary was clear because it bubbled from a spring and ran only about 200 yards before it hit the main river. 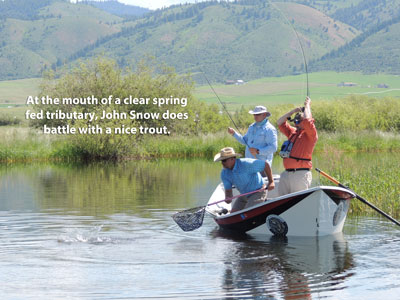 This is when it pays off to have a second rod rigged up for whatever action might be encountered. We hoped for dry fly action and we found it, even though the fish were few and far between, we saw rises and stalked them in the drift boat, taking turns to tempt the fish with our offerings.

The clear spring water tributary drew us in. Mike Carlson, on the oars, worked us ever upstream as the banks closed in on each side.

After Bible and I had each taken one and lost another, we dropped back to the main river.

Slack-lining on the Seam

Entering the river again, we found another circumstance that an angler often encounters in June when the water is high. When a clear-running trib empties into brown water, the two flows of current run parallel, before the waters are mixed. The result is a place where trout can hold in one flow and feed out of the other. That hydraulic curtain that divides the two streams, often for hundreds of yards downstream, can hold a lot of hungry trout.

If the boat can be positioned on the upstream side, or an angler can find a spot on the bank to fish downstream along the seam, a good choice in this instance is a sculpin imitation.

This method of prospecting is called slack-lining. Throw the fly directly downstream, then began to turn micro-mends left and right, to let the current pull the fly this way and that. Lengthen the line to back fish down then micro-mend again. In this manner, a run can be fished for 50 yards up and down on a single cast.

When retrieving the fly, strip it in like a baitfish getting away. With erratic pulls, the streamer simulates a baitfish fighting the current. Trout will follow and strike at direction changes.

I finished our float with three good fish brought to hand and a few that threw the hook after short battles.

Windy and blustery, with a bit of rain blowing sideways, it was a day we could have stayed in camp. Instead, we went out and earned our fish.

That’s the way to salvage a fishing trip from muddy water defeat. The other way is to go high in the system where the fast-running creeks clear up first. We had good maps and we had a full tank of diesel to explore for two more days. The other guys talked about mayflies and hopper/droppers, but I could only think about the slashing strikes I’d had in that brown water. 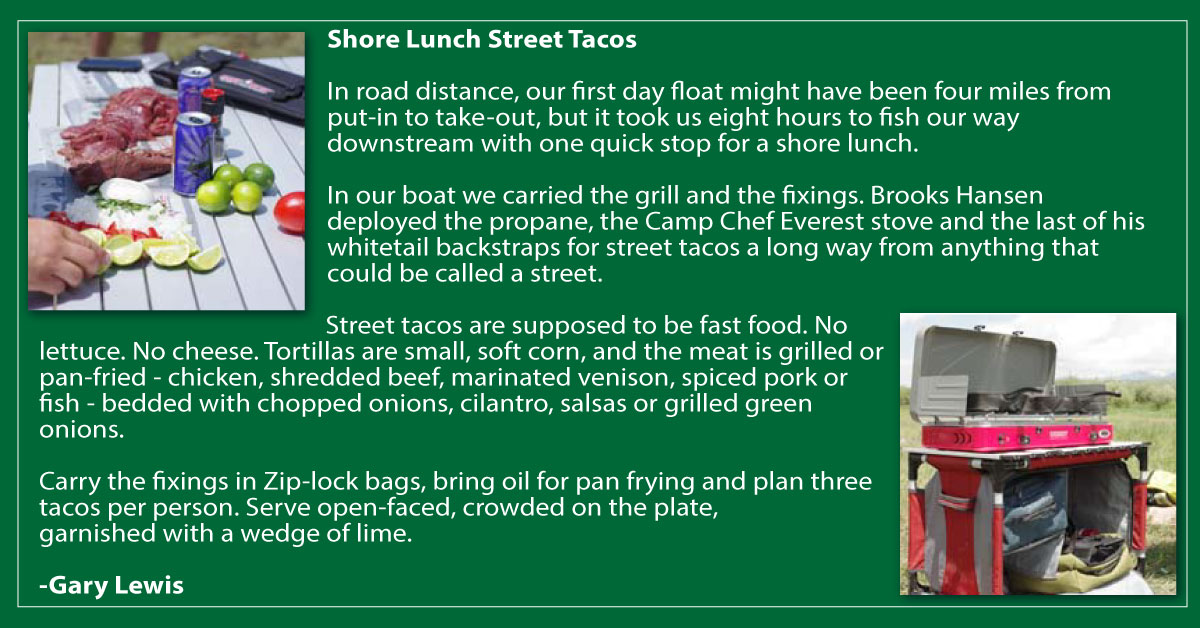