A 1914 Model T and old Winchesters on the hunt in the 21st Century. To these young hunters, these are the good old days.

I will build a car for the great multitude. It will be large enough for the family, but small enough for the individual to run and care for. It will be constructed of the best materials, by the best men to be hired, after the simplest designs that modern engineering can devise. But, it will be so low in price that no man making a good salary, will be unable to own one – and enjoy with his family the blessing of hours of pleasure in God’s great open spaces.”
-Henry Ford 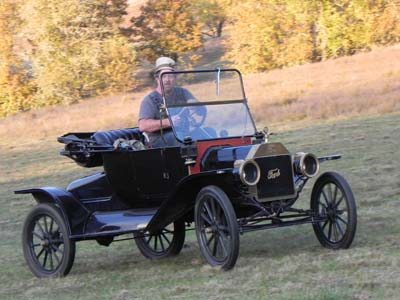 When the Model T was introduced, the world was a different place. There was little pavement then, except for sidewalks and a few city streets. Roads were made of dirt, except when it rained and then they were made of mud. In those days, Americans made their living on the family farm and Henry Ford intended his car to be as much a tractor as it was an automobile. The car was nimble in rocky terrain and could ford shallow streams and climb steep hills. When necessary, it could be parked and a wheel removed to fasten a pulley to the hub to drive a saw or a conveyor. In 1909, a standard four-seater cost $850, when the competition’s cost upward of $2,000. By 1914, the price had dropped to $500, equivalent to four month’s pay. That year, Ford produced 308,162 Model Ts. In 1915, the company sold over 500,000. You might say, “Ah, those were the good old days.”

But more than a hundred years later, Henry Ford’s dream still resonates. While there are not many Model Ts in hunting camps, we had one in ours.

My uncle Jack bent to crank the motor of his 1914 Model T Ford Roadster. On the fourth try, the engine leaped to life. This was Jack’s first deer hunt since 1975. No one can say how many deer hunts the Model T had been on, but it was safe to say this was its first in the last 50 years. For my Uncle Joel, this was his first deer hunt ever. My dad hoped to tag his first buck since 1962.

Fifteen-year-old Alexa, my daughter Mikayla (15), Elizabeth (14), Victoria (13) and Jack’s granddaughter, Lexi (10) hoped to get a chance at a blacktail deer as well. 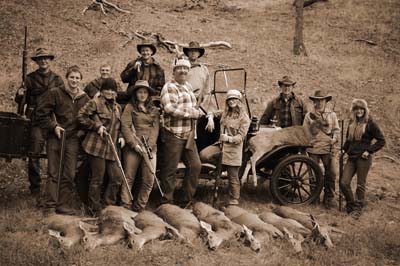 In the good old days, families and friends had a hunting tradition they passed to the younger generation. In these years of higher-priced hunting licenses, controlled hunt lotteries, confusing regulations and ever-increasing demands on family time for ball sports, it is hard to put such hunts together. With a grant from the Friends of NRA, we started the Young Hunter Project, to give kids who otherwise might not hunt, a chance to try their luck in the woods.

Leaned against the wall of the old house were our guns: a Winchester Model 54 (circa 1926) with six notches on the stock, a Model 70 once owned by John Nosler and Ed Neff, a former Nosler employee, a Winchester Model 94 from the ‘40s, an Ithaca Lefever from the ‘30s and an octagon-barreled Model 94. If the scratches and worn bluing were any indication, each could tell many stories. 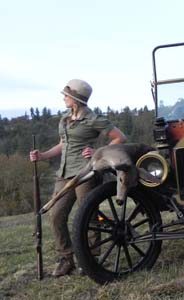 We hunted the Umpqua Valley in western Oregon. With the predator control exercised by local sheep growers, there are a lot of deer – blacktails and Columbian whitetails. Our quarry was the blacktail, distinguished by gray coat and face, longer ears and a short, brushy tail.

Motivated by 20 horses in the old powerplant, the Ford chugged up a long hill and topped out on a mountain. The engine hadn’t worked that hard in quite a while. It dumped half a gallon of water out of the radiator. Just like the good old days.

A long valley stretched toward the south. As we motored into the driveway, a whitetail sprinted out of the apple orchard. The landowner hadn’t had a Model T on the place for many years, he said, but he thought there were some parts rusting out there in the grass. He brought out some guns, a few older than our car and then pointed us down the hill where deer browsed in the afternoon light. We walked down into the field and stalked along a fence line. Mikayla carried the Model 70. She closed the bolt on a 150-grain Nosler Partition.

The fields tipped up away from the creek where we knelt in the shadows of the oaks. Out in the green clover, three blacktails fed under the limbs of a fir tree.

Mikayla found a rest on the roots of a mossy oak. Separated from the other two, one of the does fed away from us, then turned broadside. One hundred-seventy yards, I guessed; the deer turned away then back.

The 15-year-old thumbed the safety to ‘fire,’ took a half-breath and held it. Steady in the scope, she stroked the crescent of the trigger.

Jack hiked back to get the Ford. Fifteen minutes later, we heard the engine crank. He drove down through the green fields, eased across a ditch and up the other side, the wooden spoked wheels and old India rubber throwing mud into the fenderwells. 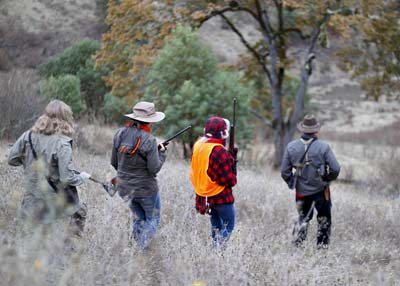 Headed downhill to stalk blacktails in the poison oak and blackberry, Mikayla Lewis (left), Victoria Flaherty, Alexa Eicher and Gary Lewis spotted and stalked several deer on the morning hunt, but no good shots were offered.

The next morning, Victoria and Alexa donned their state-mandated hunter orange. Kristy Titus, their self-appointed den mother, would help them glass for deer. Kristy spotted a lone doe beneath a cedar and we stalked to 188 yards. After 20 minutes, the deer stood, walked toward us and turned. She lifted her tail, we saw it was long and fringed with white – a Columbian whitetail – and called off the shot.

With the help of landowner Brian Smith, his friend Dave and photographer Jim Harris, we found a blacktail herd in a big valley and the girls tagged their first deer with long shots into poison oak thickets.

Back in the green valley with Lexi, we spent ten minutes working on the athletics of the trigger squeeze. When she could break the trigger on an empty round five times in a row without disturbing the penny I laid on top of the barrel, she was ready. 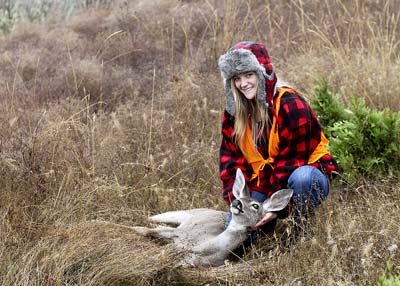 Alexa Eicher with her first deer, taken on a hunt with old rifles and a vintage Model T Ford.

Thirty minutes into her hunt, she sighted on a blacktail in an oak bottom and squeezed. She had her first blacktail.

Meanwhile, my dad hunted with Lee Sandberg, of Black Oak Outfitters. Lee spotted a forked horn in a canyon and dad made the shot that connected him with his first buck in 49 years.

Our landowner host on one property, Brian Smith, turned to me. “I’ve been hunting deer all my life,” he said. “I get more enjoyment out of taking kids on their first hunts now. Victoria was my 17th first-time hunter and Alexa was my 18th. I love this.” 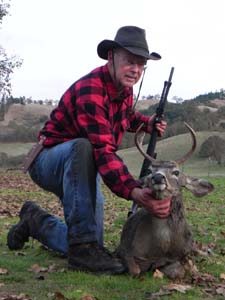 Don Lewis quit deer hunting back in the 1970s, but a desire to restore a family tradition led him back to the field for a blacktail hunt in Oregon’s Douglas County.

It was early in the afternoon on the last day when we spotted a buck in a five-acre patch of poison oak. It would be a long shot at a steep downhill angle. Elizabeth Flaherty propped her rifle in the fork of the shooting sticks and held the crosshair low. The buck appeared and disappeared in the toxic foliage. When the buck paused, broadside, in an opening, she squeezed the trigger. 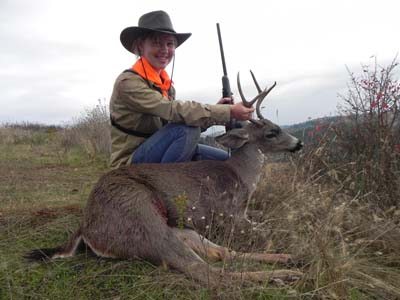 There was no way to get the Ford down to that buck, we hauled it up the old-fashioned way and Elizabeth bent to work with a knife on her first buck. Then we loaded it into the old trailer behind the Ford.

There was a time when the Model T was a fixture in hunting camps. Ford’s dream was to build a car for the multitude, for the average man to “enjoy with his family the blessing of hours of pleasure in God’s great open spaces.”

You nailed it Henry. These days spent afield with young hunter’s forge bonds that are hard to break. These are the good old days.