When the sun goes down, the biggest and the rarest of the wild hogs come out to feed. This is when a hunter might get a chance at a white or a silver boar.

South of San Antonio, twenty-four hours into a two-day hunt for wild boar, we stopped to check the trail cameras. In front of an automatic feeder, I’d set the first one, a new Bushnell Trophy Cam HD.

When I put the card in the laptop halfway through the hunt, I clicked through more than 200 images. Huge numbers of animals had fed in and around the feeder from dusk till dawn. 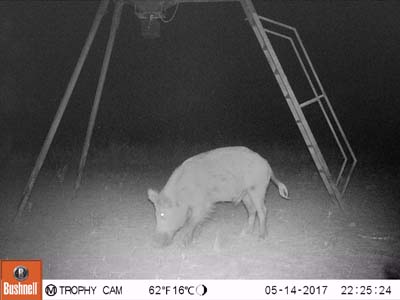 White and silver pigs came out of the woods after dark. Reviewing the trail cam pics, the owner of the property saw pigs he didn’t know he had.

An old razor-backed boar, long and lean and alone. Sows - young and old - and piglets and young boars and a big red, rounded out through the shoulders with good living. I paused and looked again when I saw the white ones and my gaze lingered longest on the hogs that were lighter in color with black markings. 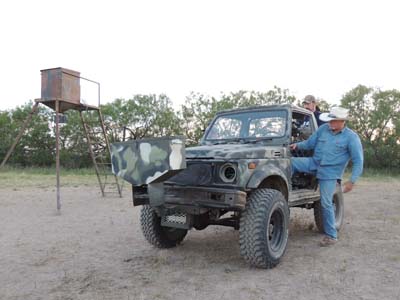 Jeff Griffith checks the feeders and the trails in his custom farm Suzuki.

I’d had a chance at a young boar the evening before, just a glimpse when it fed along a trail cut through the mesquite. It showed itself a half hour before dark, then it caught some hint of human scent on the wind. Alerted, it stopped and looked at the blind, then went back to feeding. To shoot, I had to switch places with Sam Pyke. When he had moved his camera tripod, I slid into the vacated seat, eased the rifle up onto the sill and waited in vain. That spotted pig gave us the slip. 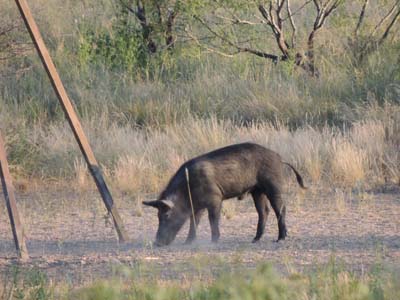 Lewis passed up a chance at this solid young boar. This one fed out in the open for most of an hour.

By the end of day two, it was that time in the hunt when I had to shoot something or risk going home empty-handed. I’d passed up chances at a dozen pigs – young boars and dry sows. On the second evening, after dark, I’d photographed a 300-pounder, chuffing like a bear on the edge of the light from the porch of the lodge.

“Pigs,” Sam hissed. A passel of piglets and three adults appeared out of the mesquite, into the long grass and then they spread out in the pathway. One was an eligible candidate. I waited until the black one was broadside with no other animals around it. Twenty yards, no more.
Already on the sill, the rifle was ready, I thumbed the three-position safety through to ‘fire’, dropped the crosshair to one-third up the body and tightened my finger with three pounds of pressure.

At the crash of the rifle, black pigs and piglets streaked in every direction. Hit, my target went down on its chin, then managed to get going again, running headlong into the mesquite. Ten yards in, it went around in a circle and crashed. 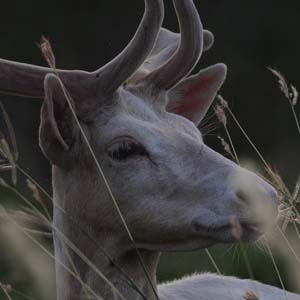 Sam and I grabbed the back legs and pulled the 140-pounder out to the trail where the outfitter would meet us with the truck. That was when we saw the white deer again. It was a fallow deer, pure white with velvet antlers. It had drifted out of the trees like a revenant, like a haunt, browsing, but watchful in the last light of the day. 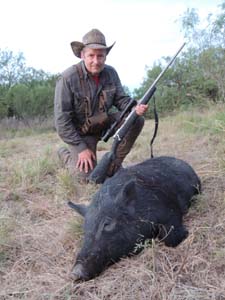 This dry sow gave Lewis several opportunities over the course of the afternoon and evening. A Nosler AccuBond Long Range bullet proved the pig’s undoing at 20 yards.

In 20-years of hunting wild boars in a half dozen western states, almost all the pigs I see are black ones; maybe five percent have some color phase other than black or brown. I wondered if maybe the light-colored animals tend to stay hidden during the daylight hours. We only saw white or gray hogs on the trail camera after the sun went down.

In the morning, I handed the rifle to Sam. I’d try to operate the camera while Sam would try to take it with the 6.5 Creedmoor. This one was a Montana Rifle topped with a Burris Veracity scope and fed with Nosler’s 129-grain AccuBond Long Range. Zeroed at 100 yards, it was a good choice for this hunt, when shots could range out to 300 yards or more.

We took our morning stand in an elevated box blind. One piglet showed itself for all of one second. We sat the same blind for two hours in the afternoon. This stand seemed too open for a chance at what I was starting to call the “Ghost Hog.” There were several ghost hogs that we’d seen on the trail camera, three white ones and a silver with black spots.

For our last evening hunt, we picked a spot deep in the woods surrounded by old growth mesquite, patches of cactus and all manner of thorny, spiky bushes. We imagined rattlesnakes in there too, big south Texas rattlers, but we didn’t see any.

This hunt was a scouting mission to check out a new hunting lodge, carved out of the mesquite forest, south of San Antonio. Jeff Griffith is building a bow-hunting only operation for hunters who chase deer and hogs with archery tackle. Ours could be the only rifle hunts on the property. But I took my hog at bow range.

Less than an hour left in our hunt, with the sun going down, we left the blind and looked down a long, narrow corridor overhung, with mesquite and oaks. In the gathering dusk, a ghostly figure caught my eye.

“Lay down on the ground,” I whispered to Sam. And he did so, although he hadn’t seen the animal yet.

It shimmered into view again, ghostly silver in the failing light. Ever closer it fed till it quartered toward us and paused, offering Sam a moment to put the crosshairs on it. 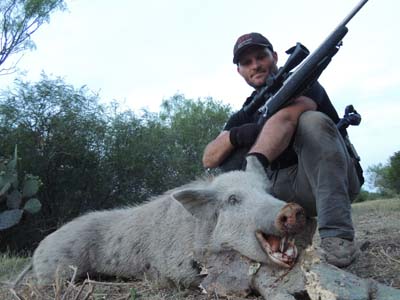 Though the trail cam showed several white and silver boars, these larger, easier-to-see animals only came out after the sun went down. Borrowing the rifle from Lewis, Sam Pyke flopped down on a trail and shot this trophy boar at 61 paces.

Then the rifle crashed and the pig, hit, charged on a diagonal into a patch of cactus. Cautious, we followed it in, finding a little blood after the first five yards, then more, on both sides of the trail. The trail turned, then turned again where the animal had taken evasive maneuvers. When we saw it, the ears were up and it was eyeballing us. Sam put another one in it, which proved to be wise when we did the postmortem. On the first shot, the bullet had angled through, taking one lung, but leaving the animal in possession of enough faculties it could have caused us problems in those tight quarters.

Out in the open, we admired what may be one of the most beautiful wild boars I’ve ever seen. While we had been haunted by the white ones, this one, silver, flecked with black, was captivating. Pyke’s first shot was at 61 paces. Although the angle had been good, the bullet placement was just a little off. It was a good reminder a person should always be ready to take a second shot, if necessary.

Back at the lodge, Jeff and Hunter hung the Ghost Hog nose-down, then washed it down with cold water. 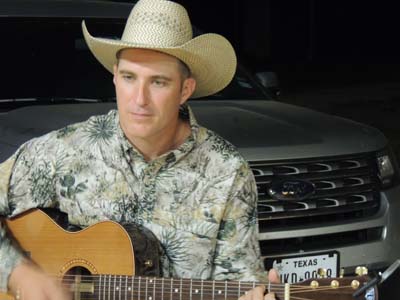 Preston Coly picks out a tune on his favorite Breedlove guitar. A pastor and singer/songwriter, he makes his home in La Pryor, TX.

Preston Coly, a cowboy pastor/singer/songwriter, sat on a stool and sang and played while we turned a big wild boar into the raw materials for tacos carnitas, barbecues and pork loin feasts. 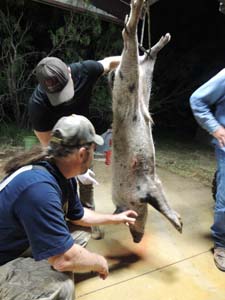 Hunter Artz shows Sam Pyke the fine points of using every piece of this trophy hog.

To musical accompaniment, Hunter coached Sam in the finer points of using every part of the hog. He explained the use of each part - which would go for pulled pork sandwiches, the cuts that are best turned into steaks, burger and sausage and the organs he saves for his dogs. In a part of the country where wild hogs are often shot and discarded, it was a lesson we won’t ever forget.