This fascinating European import is a challenge to hunt in the rolling hills where it makes its home.

Out on a low hilltop on a little rectangle carved out of farm ground near Rockford, Washington, there’s a quiet place called the Mica Creek Cemetery. We turned on a dirt road past the small collection of grave markers, shaded by pines and yellowed vine maples and wild rose and hid the rigs in a gully. 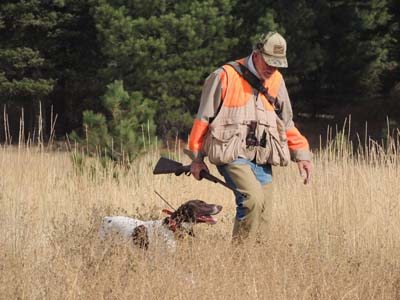 Joe Biggs, a guide from Double Barrel Ranch in the Spokane Valley, joined us for this hunt. We already had a couple of pheasants in the bag, but now it was time for the main event - a hunt for Hungarian partridge.

Bob Mulligan turned out Duchess, a four-year-old German shorthair and kept her close to heel. My cousin, Neil Lewis, carried the camera - we would trade off shooting pictures and shooting a 20-gauge CZ Ringneck.

“We’ll head to that little hilltop to start, then work back and forth through these little washes,” Biggs whispered.

I remembered my very first Hun, taken on a long-ago chukar hunt in Oregon. That bird came from a small hay field close to a creek. We had thought we were finished with for the day, when one of the German shorthairs went on point. A handful of birds came up and I knocked one down. The experience taught me a lesson about where these interesting gray partridge live. 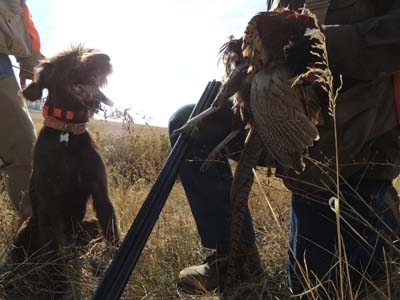 Liesl and a rooster pheasant - a bonus bird on a hunt for Huns.

Liesl, my almost two-year-old pudelpointer and Duchess worked ahead, quartering back and forth. Duchess seemed to catch the scent first, tightening her circles, acquiring scent, losing it, picking it up again. As soon as she locked up, on point, two partridge jumped into the air. I tipped one into chest-high rye and, moments later, two more partridge were aloft.

After the shooting was over, Liesl made a retrieve on her first Hungarian partridge.

Perdix perdix is the scientific name for the bird we affectionately call the Hun. Early in the 1900s, this bird was successfully introduced in the United States when some 40,000 partridges were transplanted from the game coverts of Europe into America. 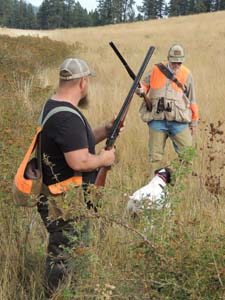 Neil Lewis and Bob Mulligan walk in on a point.

Henry Oldys, a biologist of the day, wrote in his report, “Introduction of the Hungarian Partridge into the United States”, that the first successful transplant was in 1899 at Lynnhaven, in Princess Anne County, Virginia. Ninety-seven birds were stocked in the Willamette Valley in 1900. Some 2,000 partridges were released in eastern Washington over a three-year period starting around 1906. After three years, along the northern border of the state, they were reported to be “almost as plentiful as pheasants.”

In my experience, this partridge is a bird of open farmland, preferring coverts in tall wild rye, native grasses, millet and other crops. I’ve found them in coveys of half a dozen to as many as 15. They run ahead of the dogs, then try to hold or flush atop a rise. The rise can be explosive as birds seem to pop out and go in various directions. Most, though, go the same direction and the birds can be located again atop the next rise.

I find where there are Huns, there are hunters haunted by them. Joe Biggs is one such, he has chased them since he was a kid. 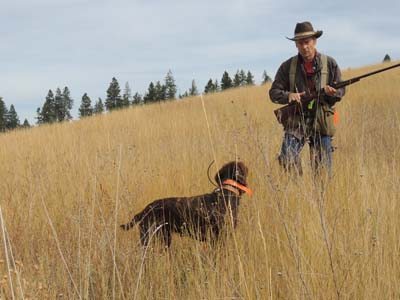 Scent conditions were difficult in the hot, dry air on this end-of-September hunt.

“We have Huns here, native to the area. The habitat suits them well, they love the bluegrass fields and the wheat fields and live out on the rolling hilltops and ridges.”

We often find the birds in short, light cover. And they are almost always a surprise when we expect quail or pheasant instead.

We had to stop early because our dogs were tired and the weather was unseasonably warm, but we each had a bird to hand and that was enough.

I took a few minutes to walk through the old cemetery. It was officially established in 1905, but there were older markers, probably all belonging to a single family. Many of the headstones only listed a first name, date of birth and passing.

Tendrils of wind ghosted in the treetops. If one inclined an ear at dusk, he might hear the partridge. Kieerr-ikk. Kieerr-ikk.

Some of the people at rest here, no doubt, were hunter/farmers who welcomed the European import with the orange head and grey legs and habit of holding tight on little hilltops like this one. 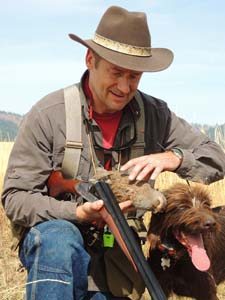 In hand, the Hungarian partridge has an understated beauty. Wings of white and mottled brown allow the bird to hide from predators by holding still. A pastel-grey on the breast blends on the head with shades of brown. Their eyes are surrounded by a pencil-thin border of red. Flanks and breasts are splotched with markings of chocolate brown.

We often find the birds in short, light cover. And they are almost always a surprise when we are expecting quail or chukar or a wary old rooster.

Huns feed mainly on grains like corn, oats, wheat and barley, but also eat weed seeds and green leaves. They start the day after most of the dew dries off the grass then feed until late morning, loaf in a grassy area until mid-afternoon, then resume feed­ing until dusk. The birds roost in alfalfa fields, grain stubble, short grass or even on plowed ground. They often form roosting rings. In winter, Huns may roost in a depres­sion in the snow or burrow-roost under it.

Coveys normally consist of 10 to 12 birds. Huns do not hold well when first approached. They tend to sneak ahead of a hunter or dog, then burst from cover in unison. The covey remains together. Early in the season, Huns fly only a short distance. As the season pro­gresses, they go farther, some­times over half a mile.