Straight out of the Victorian era - the kick, clobber, and fury of a vintage harpoon gun.

Story and Photos by Gary Lewis

Perhaps the main quarry for a shoulder-fired harpoon would have been pinnipeds: sea lions, walrus, fur seals and hair seals. The two main families are Otariidae (eared seals) and Phocidae (earless seals). Seals are used for oily meat, their fat and their pelts. The fat was, and is, used for fuel, lubricants, soaps, paint, cooking oil and for processing leather. The fat was also used as the raw material for an igloo window.

For the Inuit, and for Arctic explorers the meat was a valuable protein and a source of fat, vitamin A, vitamin B12 and iron.

The late 1800's and the early 1900's were a time of Arctic exploration. Robert Peary and his sledge party claimed to have reached the North Pole on April 6, 1909. The Polaris expedition of 1871 ended in tragedy as did the Jeannette Expedition in 1879. 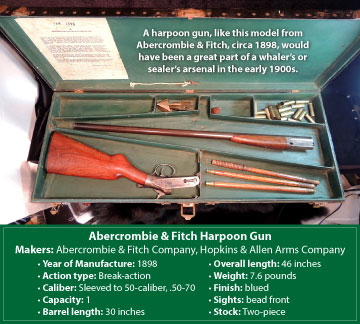 Sealers, whalers, explorers and adventurers of all types would have thought to add a harpoon gun or two to their armories.

In the early 1900's along the waterfront at No. 36 South Street in Manhattan, a sportsman could delight in the latest in hunting and fishing gear at Abercrombie & Fitch.

On the racks, the genteel and the adventurous could find everything from a pith helmet to an engraved double rifle. The rich and famous shopped there as well as the prospector, big-game hunter, and fedora-sporting dreamer.

Teddy Roosevelt outfitted his safari at A&F and Ernest Hemingway frequented the store between working on novels and his own safaris. In a short story for Esquire, Hemingway mentioned a harpoon gun he bought at Abercrombie & Fitch when he was “a little tight” (Papa-speak for drunk). He paid $60, which might have been a lot of money in 1928, but he had just received a $5,000 advance for A Farewell to Arms.

It’s hard for us in these days to picture it, but a harpoon gun would be put to use to hunt beluga whales and narwhal. On a tuna boat or with a marlin on the line, when fighting a big one close to the rail, a harpoon could be used to close the deal.

Once a barb was under the skin, the fish would be fought and retrieved using the line attached to the spear point. Dolphin would be subdued in the same manner. But the most likely target for a harpoon gunner’s aim was a seal.

To fire it, a blank cartridge is loaded in the chamber and a wooden dowel is fitted inside the barrel. A line is attached to the arrowhead or spearpoint. The dowel and line are tamped down against the cartridge until the gun is fired.

Sometime around the turn of the century, a buyer laid down cash money for an A&F harpoon gun built on a Hopkins & Allen single shot blackpowder shotgun. Kitted out in a box with points, shafts, blanks and a cleaning rod, the adventurer was ready to take to the water with a shoulder-fired spear.

Perhaps this gun was employed in Alaska or in the upper Atlantic off the coast of Maine. Wherever it was used, the owner kept it in serviceable condition. Over 100 years later it found a new home and a new fish to hunt.

My friend Matthew McFarland, a collector of big bores and other interesting items went looking for such a piece and he found this one, for which he paid $600 for the gun and accessories. We took it on a carp hunt in a muddy lake. 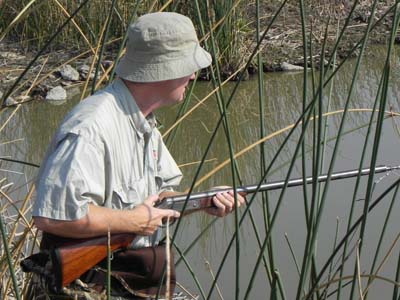 Matthew McFarland opened the action of the Hopkins & Allen Arms Company gun and thumbed in a handloaded .50-70 blank. He closed the action and inserted an aluminum shaft tipped with a trident.

In the shallows, carp cruised and sipped at the surface, their dorsals and tails broke the tension of the muddy water.

We were fishing a small lake sandwiched between ranches. Bill Herrick had arrived three hours before us and had already battled six carp on his fly rod. When Matthew, his boys Chisel and Finney and I arrived, we began our hunt.

Matthew’s harpoon gun was sold by Abercrombie & Fitch around the turn-of-the-century, a single-shot blackpowder shotgun, sleeved with a 50-caliber barrel. It came in a tincloth-lined case, complete with blanks, a cleaning rod and spear points.

On the inside of the case, a typed page dated January 1898 set out the directions for using the harpoon.

When McFarland purchased the gun he set to work to put it back into service.

There were no wooden shafts in the felt-lined box when it came into his possession.

“The wood shafts splintered in the barrel unless I kept the powder charge super low. I found that to use wood, I had to look for a shaft with a close, straight grain,” McFarland said. “Otherwise it would just splinter in the barrel.”

To get more reliability out of the harpoon, McFarland experimented with steel and aluminum shafts. Steel lasted longer, but it did not fly as far. The effective range with a steel shaft was five to 10 yards less than with aluminum.

“The aluminum was more expensive, but it was worth it,” McFarland said. He cuts the shafts to 29 inches and affixes a steel broadhead at the business end.

McFarland carried a bucket in one hand with a length of braided line attached to his dart. Using the cattails for cover, he would focus on a carp, wait for it to turn broadside then hold the bead beneath the line of its back. At the trigger squeeze, the aluminum shaft leapt out of the barrel. The cord would shoot from the bucket and pile out into the water. We’d hold our breath while he wound the line back in.

Sometimes he brought back scales, but most shots struck the fish glancing blows to their armor. These carp averaged between 4 pounds and 10 pounds. I began to believe that the gun and the spear were more properly suited to large saltwater fish. Though he struck several, the prongs failed to hold.

After several shots, McFarland handed the gun and bucket to me. The fish were not as active as they had been, but from time to time, the thin line of a back would appear close to the surface. That was the time to shoot.

In the shallows, a fish bulged with a great wake that telegraphed its bulk.

“There.” It was close. I eared back the hammer, mashed my cheek against the wood, put the bead under the fish and fired. 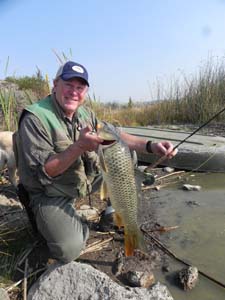 Each of McFarland’s homemade aluminum shafts weigh about half a pound.

Upon ignition, the blank is fired, the shaft leaps from the barrel and carries with it the line affixed to the head of the spear.

According to the principle at work in Newton’s Third Law, the recoil caused by the discharge of a gun exactly balances the forward momentum of projectile and exhaust gases. When the hammer falls on the primer and fires the blackpowder blank, it propels the aluminum shaft, the point and the line.

With the slower burn of the blackpowder, the felt recoil seemed to occur in two stages.

It had a whale of a kick.

Over the next hour I shot at several carp, but they are smaller game than this harpoon gun was intended for. Sometimes I missed and sometimes the heads struck the armor plate (scales) a glancing blow.

Next, McFarland handed me an air rifle he had converted to shoot arrows. A red dot sight made it easy to track the carp. 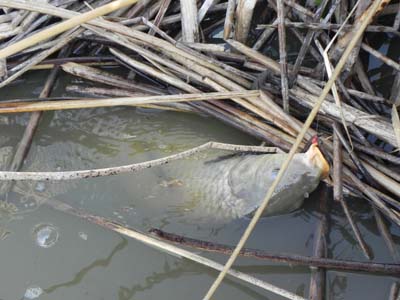 When there was a lull in the action, I eased onto a dock over deeper water. Plumes of fresh mud puddled at the surface where the fish worked close.

Twenty feet out, the fly sunk and pulled the line down. On the third cast, the line straightened, I lifted and the rod plunged. When the fish came to the surface, its scales flashed gold, a huge goldfish on a fly rod – six pounds on a six-weight rod.

Much maligned by salmon and trout fishermen in the United States, the lowly carp is a lofty prize in Europe and Asia. In the United States, it is classified invasive, a rough fish, considered harmful to native species. When hooked, they are strong fighters and worthy of the respect of any angler. But they are hard to take with a harpoon gun.