Plan more coyote hunts in spring and summer to take pressure off big game in the critical months for young ungulates.
By Gary Lewis

Waves of heat shimmered off the asphalt. The mercury hovered north of 95 degrees. I parked at the gate to wait for the rest of the party and the stillness of the summer day stifled.

If there was one corner of the state that hadn’t been invaded by hordes of eclipse watchers, I’d found it. Out here on a highway east of Paulina, west of Seneca, smack dab in the center of nothing, I leaned against a truck tire and waited. No one passed in an hour.

I wandered away from the truck and found a water hole. Down in a creek bottom there was still some moisture and along its far bank, where the receding water left a fringe of mud, I found a coyote track. Proof something else lived out here in this heat.

In late spring and summer, antelope fawns are especially vulnerable to coyote predation.

When my friend, Shaun Hannay and his 17-year-old son, Luke, rolled into view, we wound our way down the long gravel driveway to the ranch where we were met by Justin and Nikki Aamodt, who were setting up their summer camp on land they lease, high in the high desert of eastern Oregon. In summer they hunt coyotes and when September rolls around, they guide a few bowhunters for deer and elk, switching to rifle hunts in October and November.

Who hunts coyotes in summer? The serious coyote hunters, the ones who understand how important it is to keep predator numbers in balance, protecting the young ungulates, trying to get a foothold in life.

Out here in the west, when we take a hungry coyote out of the pack, we are helping mule deer. Each one that assumes room temperature makes it more possible for deer and antelope fawns to grow up.

But we are creatures of habit and we don’t start thinking about coyote hunting until coyote pelts thicken up with the coming of winter. That should change. 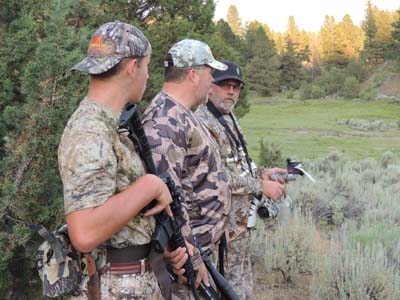 To really help mule deer and pronghorns, we should hunt coyotes from February and into June and July.

Males and females begin to pair up in February and are well into the breeding season in March. They set up the pair bond, establish a den site and start to defend it.

Take out a male or a female in the month of March and the surviving partner will not be able to find a new mate before denning season starts. Keep hunting. In April, it is important to try to break up pairs because it is difficult for the remaining coyote to raise a litter of pups.

In May and June, coyotes are raising pups and at this time, they prey heavily on deer and antelope herds and even on elk calves hidden in the grass. Near ranches and farms, coyotes watch for opportunities to pounce on lambs or calves. Often the coyote will attack a calf as its mother is giving birth.

Take a coyote in May and June and the number of coyotes that are pestering the herds is reduced at a time when baby fawns, kids and calves are at their most vulnerable. 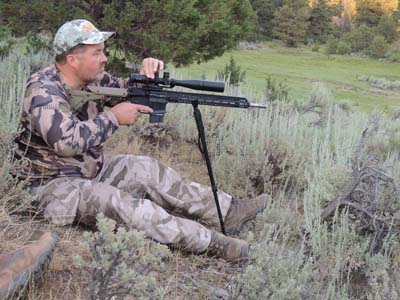 Set up in front of brush to break up the outline, Hannay will put on gloves and a facemask before the call starts.

Three Seconds at Sunset
The heat of the day lingered in the high country well past the dinner hour and with an hour left before sunset, the temperature still read 85 degrees. We loaded into the truck and rumbled, slowly and quietly away from the ranch buildings, up a narrow road that seemed to vanish in the junipers.

Justin Aamodt led the way. Single file we followed a cattle trail through sagebrush along a dry creek bed and into a valley where a small band of black Angus grazed in short green grass.

For this hunt, Hannay carried a Noveske AR-15, chambered in the then brand new 22 Nosler, topped with a Vortex scope. Propping the rifle in the sticks, he dialed the scope back to a lower setting for quick target acquisition. Luke Hannay also carried an AR-15, a short-barreled rifle topped with a scope.

Down the hill, on the edge of the set, I sat down with my Montana Rifle, dialed the scope back to 6X and pulled a mask down over my face and gloves over my hands.

Aamodt slipped quietly through the sagebrush and set the FoxPro caller down, with a small cloth motion decoy to draw attention. 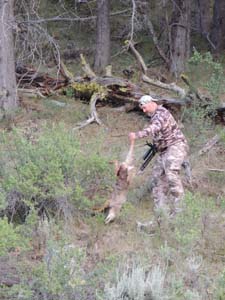 The coyote showed itself about six minutes into the call, made a quick circle and was making its exit when it stopped to a bark.

The cattle began to drift away.

Minutes later, Aamodt began to call. The plaintive bird distress cries started soft. For long minutes, the call was quiet and then it started again, this time louder.

All was still in the mountain valley save the flick of the decoy. Eighty-five degrees in the shade. Zero wind. I guessed it at 60 yards to the call, 120 yards to the far side of the meadow.

I’m convinced far more coyotes respond to the call than we ever see. For that reason, I watch the approaches to every call set and try to get a glimpse of the suspicious dogs that hold up two to three hundred yards out.

It was about six minutes in to the call, when way up the opposite slope, a coyote flashed into the open then vanished again, flowing in and out of the sight between stands of bitterbrush and pine trees.

Moments later it appeared at the edge of the meadow, out in the open before it sensed danger and began to streak back toward cover.

Aamodt barked and it couldn’t help itself. It had to stop, throw its body broadside to us and cast a glance over the valley. 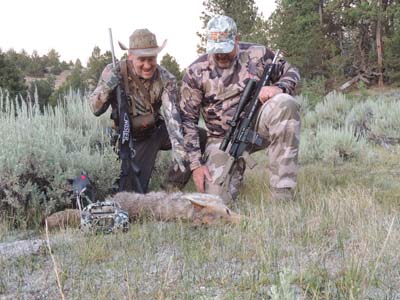 Hannay (right), was using a Noveske rifle chambered for the 22 Nosler, while Lewis used a bolt rifle in 6.5 Creedmoor.

Three seconds max. That’s how much time they give you when they do that.

My crosshair was on it, safety off. Three pounds of pressure on the trigger. With the soft recoil of the Creedmoor round, I was able to keep the scope on target and even as I threw the bolt, saw the flop of the tail.

Hannay had fired at the exact same moment. It was sunset for that eater of mule deer, that molester of beef calves, that extinguisher of the antelope fawn.

It’s summer and the living is good for coyotes. This is the time of year when they are most likely to pick off baby deer and antelope. Give the big game a break and spend a few days calling coyotes.

And like me, you just might find your favorite time of year to hunt coyotes is in the heat of summer.

Cover scents for Coyotes
Cover scents distract the predator from the scent of the hunter. Fox urine covers the human scent with the strong odor of a small varmint. A coyote’s nose may be further confused with fresh earth fumes or the scent of a food source.

Author and predator expert, Lee Van Tassell, likes to place the electronic caller at a lower elevation. From up above, he can watch more country and keep his scent high in the air stream.

One of Van Tassell’s favorite tricks is to disguise his entry trail with the scent of a jackrabbit, dragging it behind him on a rope tied to his belt. “That’s my best cover scent.

If I can’t get a rabbit, I like to splash coyote or mule deer urine on my feet before I walk down to set up my call. Usually the coyotes come straight in then circle downwind. If they circle and come to the downwind side, I like to bark or make a ki-yi to stop them. And that’s the time to make the shot.”

A high degree of confidence comes with the knowledge of how to beat a coyote’s best defense. And a thorough approach to scent control can pay off with more well-furred dogs that charge in, circle downwind and keep on coming.