PacWest Outdoors: Kodiak Island - In the Constellation of The Hunter

The hunt and the tradition are best learned experience upon experience.

“Twice a year,” the History Channel press release explained, “on the rugged island of Kodiak, a select group of Hunters head into the wilderness for the ultimate test against the elements and the largest land predator on Earth - the Kodiak brown bear.”

On the celestial equator the stars that form the constellation Orion, are known to various cultures to represent the hunter and the hunt.

The natives on Kodiak Island, the Sioux on the plains, the Hungarians and the Greeks -they all saw the hunter in Orion.

And the memory remains.

The Hunt, on the History Channel (http://www.history.com/shows/the-hunt), looks back at the Alutiiq who hunted brown bears for hides then fast-forwards through the centuries to today’s tightly regulated hunts where tags are awarded through a lottery system. 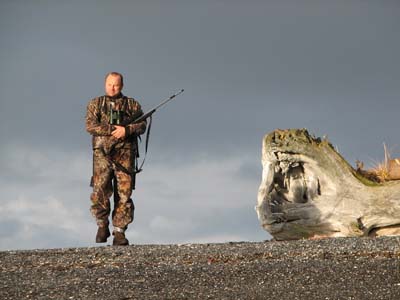 His pantlegs duct-taped to keep the burrs out of the tops of his boots, Gary Collison crosses a spit of land on a morning hunt on Kodiak Island.

The brown bear’s co-existence with two-leggers is one of the most successful conservation stories in scientific wildlife management. James Hetfield, who has hunted bears, tells the story of men and women who sleep with one eye open, clutching the pillow tight, knowing any moment they could become the hunted.

By the comments posted online at the frayed ends of sanity, it appears a lot of people think the bear hunting rock star is some kind of monster.

Several comments expressed the opinion, “Anyone could kill a bear with a gun.”

This is so far wrong it reveals a pitiable lack of cognition. On Kodiak, where there are many bears, the hunt is extremely difficult, the success rate is very low.

A hunter with a guide may not see a bear. Spotting a bruin doesn’t guarantee a shot. Most glimpses of game on Kodiak Island (I’ve hunted it twice) are fleeting. The cover is so thick a hunter has to shoulder hundreds of yards through the Devils club and willows. Every hunt starts at the beach and the deer, goats or bear may be thousands of feet up. The terrain (and fear) defeats a lot of hunters before they start. 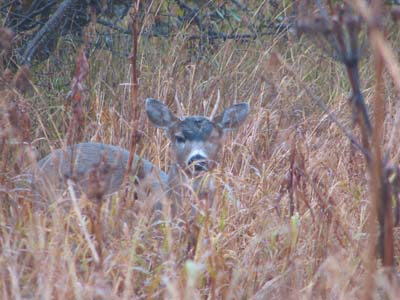 A young Sitka blacktail in tall cover on Kodiak Island.

Hunting Kodiak Island for Sitka Blacktail Deer
The grass is shoulder high and the willows bristle, thick as the hair on the back of a brown bear. We start at sea level, grab hold of a handful of grass or willows and pull ourselves up.

Always, there is the threat of bears, bears that grow to ten feet and beyond. Kodiak bears are conditioned to the sound of gun shots and the partying of the crows that means an easy meal.

On the fourth day, our captain dropped me on the beach and I started up and out of the rocks alone.

Away from the beach, I crossed a narrow trail with sharp prints in it, then a wider trail. Farther on, I pushed the willows apart and found a bed on the side of a knob. Still warm to the touch. Deer, not bear.

Ears flickered in the grass and a head swiveled. Antlers. The buck crossed through a low spot. For a moment all I could see was the line of his back. Ahead of him was a high spot. He stopped there.

At the shot, he spun and turned downhill. A doe ran on and vanished into the willows. Below me, a spike stood up out of his bed to watch as I climbed the hill to my prize.

At first glance, the Sitka blacktail is smaller than our deer in the lower 48. In most cases, however, it isn’t the deer that is smaller, it is the grass that is taller, so tall the deer has to stand up for the hunter to see its ears.

This buck’s ears were 15 inches from tip to tip; its front hooves measured almost three inches long, the same as the buck I had taken two weeks earlier in Wyoming. But Sitka antlers are small, primitive by comparison. This one had a fork on one side and, on the other, a malformed beam that grew down toward its chin. In another year, that left side antler might have killed the buck by infection. 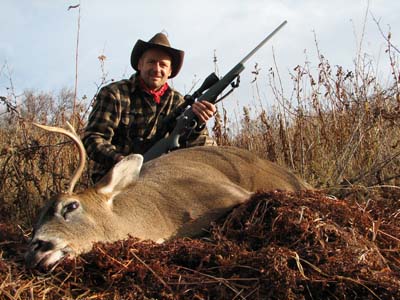 On the fourth day of the hunt, Lewis hunted solo away from the beach and bumped this buck from his bed.

Experience upon Experience
I thought of Kodiak Island when I answered the phone one evening. It was a guy ringing from Portland, Oregon. He wanted to become a hunter, he said, he had read my articles. He asked my price for guiding him on his first big game hunt.

“I make my living as a magazine writer, book author and television host,” I explained. While I had him on the phone, I tried to offer advice.

“Don’t try to be a trophy hunter, that can come later. Learn to be an experience hunter.”

It’s a tradition best passed down generation to generation. When that doesn’t happen, it’s incumbent upon the hopeful to find a guide, a mentor or friend to help them along, to become a minor star in the constellation.

I suggested he hire a guide, someone who would teach, not just take him for a ride in the truck. I made some suggestions.

“I’m not a real good shot right now, how important is that? Do I have time to learn to shoot before hunting season starts?” He asked.

This is an important thing to master. A rifle hunter should go to the range a few times to shoot at bulls-eyes, then after that, spend a day shooting targets at 50 yards and out to 300. Two weeks before the season, go back to the rifle range. Make sure the bullets hit point of aim and group within two inches at 100 yards. Dry-fire a hundred times to focus on the fundamentals of the trigger press. After that, there is much to learn about deer, bear and elk, their habitats, the wind, regulations, conservation ethics and etiquette. It all comes in time.

For the beginner, one of the best things to do is take a hunter education class offered by a state wildlife agency. Most states offer these classes in the spring of the year. Check online for class offerings. And if a prospective hunter can find an experienced sportsman to show the way, that helps.

The best first big game opportunities are for deer and elk without antlers. Another option is to hunt turkeys. Spring and summer ground squirrel and prairie dog hunts are a good point of entry. Pheasant hunting is another good first-hunt option. Experience builds upon experience.
Metallica’s Hetfield, it turns out, learned to enjoy duck hunts first before he graduated to big game with bow and rifle. He recently moved from Marin County, in California, to get closer to nature in Colorado, where he grows his own vegetables, harvests his own honey and hunts deer, elk and turkeys.

At the end of the best hunts there is a campfire under an open sky. Those blue-whites and red super-giants, the stars that wink on the celestial equator are the same lights where the northern Blackfeet and the Arizona Apache and so many other tribes saw the hunt and the hero.
Around the flames, the differences between grandfather and boy, between guide and client disappear. Each one is a star fixed in the constellation of hunter. 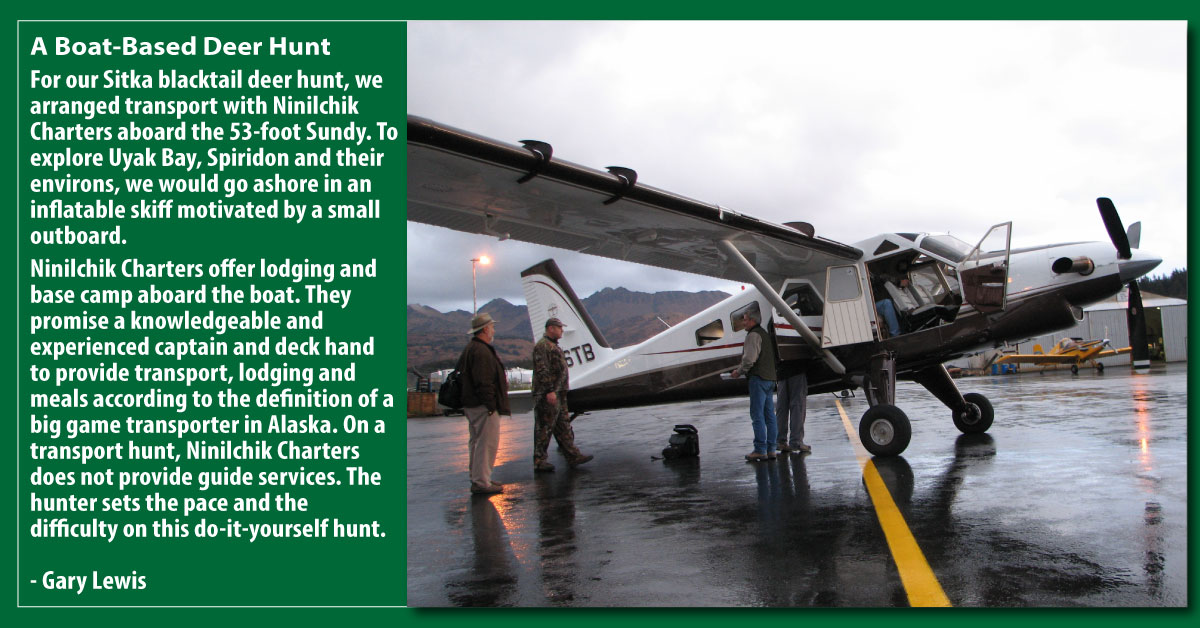