Want fish and chips for dinner? Catch it yourself. Prospecting the ocean floor with hardware and spinning gear.

We wonder how much color a fish can see 30, 60, 90 feet down. How much difference does it make if the grub on the end of the line is green or white or red or blue? Is it more important to the angler than to the fish?

When I broke off the red bait that had been working, when I stuck it to the bottom of the Pacific off Newport on the Oregon Coast, I grabbed another rod. This one was rigged with a leadhead jig with a dark green swim bait body while up the line, a red streamer dangled off a loop. Designed to give the fish an option, the rig is effective in any school of rockfish. 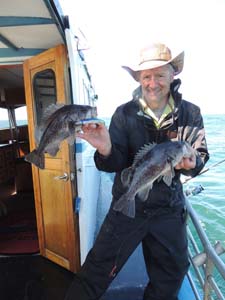 This pair of rockfish tried to eat a blue swimbait and a red streamer fished on a spinning rod. The seas were rough for this trip, but conditions are improving for crabbing and bottom fishing along the Oregon Coast.

In the middle of August, we were back aboard the Miss Raven, a 40-foot charter boat based in Newport, Oregon, skippered by Mike Sorenson. Our first mate was Justin Mitchell, who was in charge of crab pots, fishing rods, and making sure we didn’t fall overboard.

Matthew McFarland brought Chisel (14), Finney (11), and Katie (9). Eric Liddell, of Sisters, Ore., brought his son Josh (14). Paul Galvin joined us for what was supposed to be a tuna trip, but the tuna were 75 miles off the coast, too far for a one-day run.

The trouble with fishing for halibut was that out there in the big pond, the water was too rough to keep a bait in front of those tasty slabs of white meat. No matter, Sorenson said, we could find the rockfish.

I sat next to the skipper as he pointed the bow down the coast past the mouth of Yaquina Bay.

“Forty-seven degrees,” Sorenson muttered. It was colder water than normal for this time of year and it might make catching a bit more difficult. 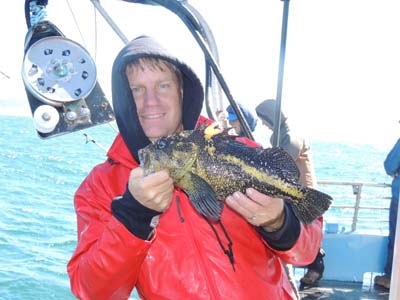 Matthew McFarland, of Bend, with a China rockfish aboard the Miss Raven a few miles south of Yaquina Bay.

“It’s the wind,” he said. “When it comes from the northwest, the water gets colder. When it comes up from the southeast, it warms up.”

I watched the electronics and saw the little triangle icon that was our boat drawing closer to the first of a bunch of marked squares that signified previous good fishing spots. And then a bunch of rockfish showed on the depthfinder, spread up and down the water in 80 feet of water.

Mitchell had put rods in the deck-mounted holders and we each grabbed one, dropping our baits down into the rough sea.

We drifted fast with the strong wind, but our baits bounced bottom and then there was an electric pulse in my rod. Near the surface I saw it, a big blue rockfish, approximately five pounds, the raw material for a batch of fish and chips, the perfect compliment to Panko, tartar sauce, and a wedge of lemon. 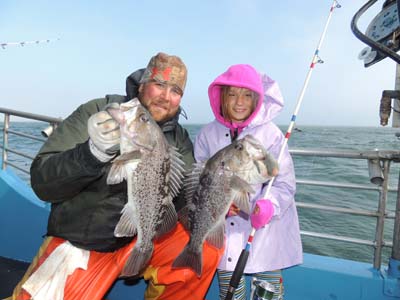 Aboard the Miss Raven, outside of Yaquina Bay, Justin Mitchell and Katie McFarland display a pair of rockfish caught on two hooks on a single cast.

The fish didn’t come fast in the cold water, but we caught one or two or five on every drift. They were blues, blacks, and deacon rockfish and a couple of lingcod too small to keep.

McFarland boated a China rockfish. There was a time when a China would bring twice as much money at a fish market as a black rockfish, but Chinas, copper rockfish and quillback rockfish must be released. McFarland lowered his prize back over the side.

Then I stuck my bait on a rock and had to break the line. I went back to the rack and grabbed a rod rigged with a green swimbait and a red streamer. I caught a fish on the fly, but no fish took the plastic. 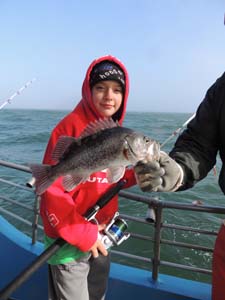 On the next drift, I swapped for a blue swim bait with a red streamer. This rig was on a left-handed rod and reel. I switched hands and dropped down the plastic and feathered offerings.

As soon as the weight hit the bottom, a pair of spiny-rayed rockfish grabbed hold, each one battling for its place in the batter.

Left out of the fish fry. Sad.

In cultures that stress conformity, like Korea, Japan, China, Latin America, and Muslim countries, the numbers are a bit lower, but they say some 32 million Americans (roughly 10 percent) are left-handed. Left out in a sea of products made for right-handers - scissors, rods, reels, knives, notebooks, cameras. 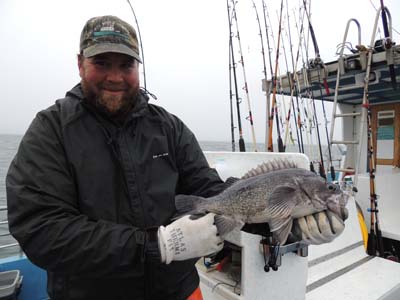 Justin Mitchell with the first rockfish of the day.

Males, they say, are twice as likely to be left-handers. And left-handers are more likely to be geniuses. It’s good for a fisherman to learn to fish with either hand. That way you can pick up any rod with any reel and go to work catching fish.

How many left-handed rockfish were below us in that gray, white-capped water? I’m no genius, but I’d say there were plenty.

I used my off hand to steady the rod against my body and my right to flip the bail and crank it back.

Every time I dropped down the plastic, I reeled back a thrashing rockfish. I got used to it. 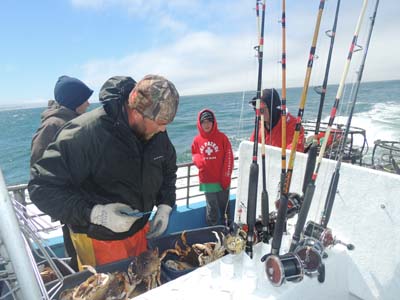 Justin Mitchell sorts Dungeness crab, sending the small ones and the females back to make more.

Barotrauma and the Deepwater Rockfish Release

On most rockfish forays, a number of fish will be released. In deep water, the quick change in pressure can kill the fish through barotrauma, recognized when the fish’s stomach protrudes from its mouth.

Several fish descender products have been designed to make it easy for anglers to safely release rockfish. An angler can easily make a release tool prior to an ocean trip. One way employs a weighted milk crate. Another one places a swivel on the bend of a barbless hook weighted with a lead ball. A quick Google search shows a variety of options.

To prevent unnecessary killing of rockfish, reel them in at a steady rate. When handling the fish, use wet hands, wet gloves, or a wet towel. After unhooking a fish to be released, hook the release device in soft tissue in the lower jaw.

Getting the fish quickly back to its depth is the most important factor in determining its chance of survival.