Never reveal your next move when playing the high card.

Article and Photos By Gary Lewis

Pheasant hunting, like the game of poker, is a contest of decision-making in the face of incomplete information. The correct decision in any given situation is the decision that has the highest expected value.

We might as well have been playing poker. Dennis Foster revealed none of his cards. The tableland turned cornfield in front of us had been harvested, except for a couple of strips of corn, in which, presumably, pheasants had taken refuge. A collection of dogs, 13 in all, mostly flushers, waited for their chance to be played, like wild cards in a deck. Dressed in canvas and oilskin, arrayed in various shades of orange, 15 hunters betrayed their anxieties, clustered in knots of twos, threes and fours.

Behind us, the combines waited. Across the table waited the pheasants.

I blocked at the end as the drivers pushed toward us. Pheasants rattled out of the stalks to the cries of “hen” and “rooster” that echoed down the line of standing corn. When someone shouted “rooster” it was quickly accompanied by a shotgun blast.

I didn’t draw a winning card on the first hand, but on the next play, Foster slipped me an ace and put me on the wing.

By the end of the first day our group of 15 hunters and 13 dogs had accounted for 25 roosters, three of which I managed to put in the game bag.

That day in the cornfields and marshes taught me a few things about roosters and strategy.

The hunt is like a poker game. The leader of the group is the dealer and the pheasant is the opponent that learns from every deal. Whatever cards are played depend on the habitat and the number of players at the table.

After opening weekend, the roosters have learned that the slam of a pickup tailgate and a whistle means hunters and dogs are coming. While we are loading our guns, the pheasants are looking for the side door.

The first rule is to make a plan. To draw to a royal flush, a hunt needs drivers and blockers. If there are only two in the party, play all the cards in the fringe cover and leave the food plots to larger groups.

The second rule is to play the wind. A hunter needs the breeze in his or her face or more accurately, in the dog’s face. Working into the wind, the dog smells the bird before he flushes it. Watch the dog for the “tells” that signal he is close.

To beat a pheasant at his own tricks, call the strategy before driving into the parking area. Visualize the play in advance. Here are four different approaches to take when pitted against savvy roosters. 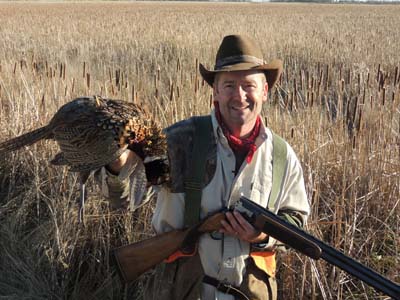 When there are fewer hunters and an abundance of cover, a measured, methodical, silent entry is important. Stay ten yards apart, work from one edge to the other in zigzag fashion. Move slow. Work brushy fence rows or grassy ditches. One or two drivers should bull through the tallest cover with a dog, searching a slow back and forth pattern. Post another hunter at the end of the row to jump sneaking birds into the air. Keep communication between the hunters to a minimum so that plays aren’t telegraphed to the birds.

When a bird starts to run, keep him between hunters or hunters and dogs. He has everyone located and as the stakes are raised, he will flush or hold.

Now the dog goes on point. Make a half-circle 20 yards around the dog to come in looking straight at him. With the bird between you and the pointer, watch his eyes. He knows where the bird is. This is the chance to make the best approach, knowing where the pheasant is going to come from. 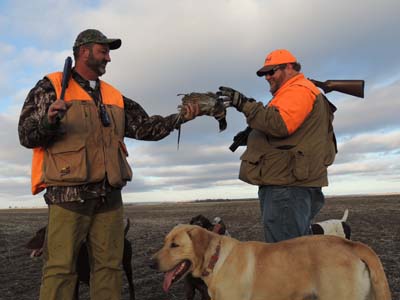 Pheasants live along the fringe. Moving from roost, to gravel, to feed and water are easiest in edge habitat. The lone hunter and a dog will make the most points on midday jaunts through fringe cover. Here the birds go to rest when the sun is high or to escape from the pressure a large group may be putting on a nearby crop field.

When hunting along the edge of a river or lake, you may flush pheasants that have sought refuge on the fringes of nearby fields. They’ll almost always fly over the water instead of back over the resting cover.

These are the birds that have learned that at the first hint of danger, safety lies on the other side. This mindset of hunting the edges also pays along the railroad tracks. Where the cinders end and the bushes start is good escape cover. And the bird will most often fly across or along the tracks, rather than breaking back into the fields.

Ditches are another sideline play. When pushed, a seasoned rooster knows how to use a ditch, whether it is a dry irrigation canal or a barrow pit, to his best advantage. Once he hits the furrow, he will go one way or the other, most often at top speed. 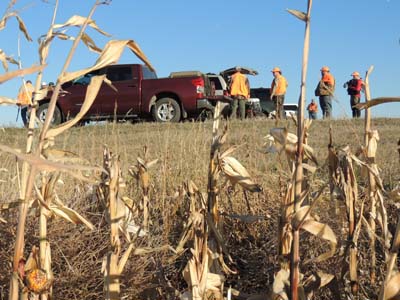 This tactic is best when there are six or more players. Come in quiet. Stop the car about a mile before the hunting field and let the dogs run off their early-morning excitement. Watch to see that they obey commands and work close before they belly up to the table. Sometimes it pays to sketch the field and the hunt in advance. Drivers and blockers should have the plan in hand and know their positions. Turn off the music, don’t slam the door and keep conversation to a whisper.

Give all the players 15 minutes to get into position. Place blockers on the sides, as well as the ends, to get the advantage on birds that squeeze out through the middle. Drivers can come in loud or quiet, depending on the game plan, but the best rule when working toward blockers is to keep the safety on until there is blue sky beneath the bird.

A variation on this trick can pay off when the field is too big for the group. Focus the strategy on one section. Quietly post the blockers then create a diversion with loud voices and car doors on the side you won’t hunt to make more birds move into the hunt area.

In a big field, a pheasant will run as far as it can before it takes to the air. At the edge, where the crops or the grass give way to a stream, a ditch, a road or a stand of trees, expect the birds to flush wild. 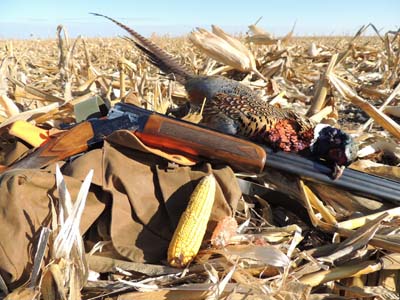 Use this move when hunting long ditches or strips of cover, such as along a railroad track or a river. One hunter is the point of the triangle, moving through the cover about 25-yards ahead of the rest of the group. The other two hunters then take the edges and push a wedge into the pheasant habitat. As the birds in the deep cover move out to the edges, they get kicked up by the hunters at the base of the triangle.

The pheasant doesn’t want to leave his hideout, so rather than flush, it would rather hold or sneak. Just when it gets around the point man, headed in the opposite direction, it runs into the next hunter. Strip habitat is taller than the surrounding cover. Here are willows and tall sagebrush, cottonwood trees and junipers. The high cover can obscure the hunters’ vision. Use the blue-sky-beneath-the-bird rule to keep partners out of danger.

Plan the hunt then hunt the plan. With wised-up birds, it is a matter of knowing the fundamentals of deception. Play the cards close to the vest. Leave the whistles in the car. Turn off the beepers. Hunt into the wind and slow down. Use blockers when you can and work the edges.

Avoid the urge to play the cards the same way on the second day. If there are birds left in a field, let them filter back in and hit them the next day with a trick they haven’t seen before.

It comes down to legwork and deception.

It is not a game that is won on every hand. Sometimes the luck of the draw runs in favor of a cagey rooster. The best a player can hope for is that a pheasant will play a flush over the dog. When that happens, number sixes beat a straight flush every time.