PacWest Outdoors: Smoke on the Water

One of the funny things about smallmouth is how they got out west. The bronze-bodied fish with the angry red eyes were brought by railroad in buckets from the upper Midwest in the late 1800s and early 1900s.

In some cases, smallies bound for elsewhere were released into creeks and rivers because trains derailed or were delayed. The hardy fish thrived wherever it found cool, flowing water.

It did so well in the Columbia, the state of Oregon recently did away with the size and bag limits for smallmouth bass.

Headed up to fish the Columbia with guide Drew Scharns, we knew we didn’t need to bring our own tackle and that made it a good opportunity to take motorcycles north to the big river.

Catherine Monchamp, Octava Best-Beck and I rode motorcycles from Wildhorse Harley-Davidson in Bend. Tray Ardese flew in from Oklahoma, Mike Alquist drove down from Kent, Wash. and Sam Pyke drove in from Beaverton.

We met up at Cousins Country Inn in The Dalles, then headed to Zim’s Brah Haus for lunch.

That’s when our smallmouth bass fishing trip went off the rails. Our next stop was going to be the boat launch at Rowena and from there we were going to fish down toward Mosier.

Lisa Farquharson, the director of The Dalles Chamber of Commerce, sat across the table from me. She stared at her phone in disbelief. A fuel train had just derailed at Mosier and Interstate 84 was closed in both directions between The Dalles and Hood River. 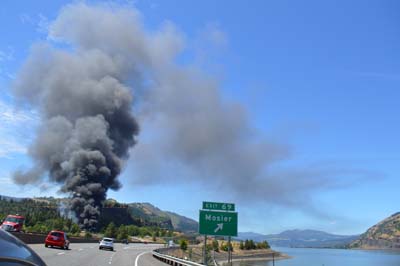 The Union Pacific derailment spilled 42,000 gallons of crude oil before bursting into flames.

Our guide, Drew Scharns, of Hood River Adventures, was on his way. He managed to get across the bridge and come east on the Washington side. Michael Gibney was pulling our second boat, but he got stuck in the traffic jam at Hood River. With a growing cloud of burning crude oil looming over the river, we had to come up with a new game plan.

All packed into one boat, Friday evening, while Interstate 84 was at a standstill, we launched well upstream at Celilo and unlimbered our rods. Because there were seven of us in one boat, Scharns pinched the barbs down on all the baits. And he put on his wide-brim hat and dark glasses for further protection against errant hooks.

We motored across the river. Not a one of our guests had caught a smallmouth bass before. That was going to change.

In the Columbia, smallmouth make a good living on crawdads, baby shad, salmon and steelhead smolts and other things that taste good with lemon and butter.

We started with crankbaits, casting them to shore and reeling back fast. It’s a good technique because, as Drew pointed out, the river was dropping at the moment and the crawdads have to move down out of the shoreside rocks to stay wet. For a crustacean on the move, that’s a good opportunity to get gobbled. 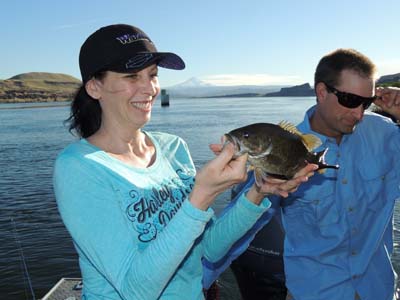 Catherine Monchamp, of Bend, Ore. and Drew Scharns, of Hood River, with a nice smallmouth bass taken on the day of the oil tanker derailment.

The sweet spot seemed to be eight feet off the bank at the transition point between shallow water and a drop-off. To maximize the time our baits spent in the strike zone, we cast at diagonals, bouncing baits off the rocks and into the water, charging them back.

After a couple of eight-dollar lures snagged up, we switched over to 35-cent jig-heads with curly-tail grubs.

The best bites we found around rocky points where the currents picked up and downstream in the foam lines. Wherever there was a bit of shade, there could be bass resting next to a boulder.

To the west, a plume of smoke stood high in the evening sky. We talked about railroads, crude oil and the river while we burned ethanol-free up and down the river from spot to spot. Up on the highway, the big rigs and the passenger cars stacked up, praying for the roadblocks to open. 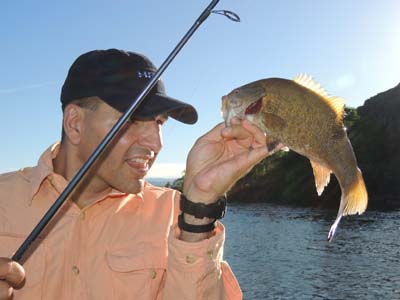 Tray Ardese with a Columbia River smallmouth bass taken a few miles upstream from The Dalles, Oregon. Keep as many as you want, but before you do, read the fish advisories and consumption guidelines. For bass in the mid-Columbia, the recommendation is no more than four meals per month.

With the idea a bass might want a change of taste from the usual diet of crustaceans, Scharns handed me a surface plug to imitate a salmon smolt. I cast it to the bank, let the ripples dissipate, then chugged it, waited for a three-count and chugged it again - on and on for most of an hour.

When the shadows were long, when I was ready to change back to a curly-tail grub, a fish splashed at the bait. When it felt the steel, it blasted into the current. A minute later it took to the surface, trying to throw the hook. When it swooped too close to the boat, Scharns scooped it up in the net, a female with a tail frayed from nesting. We guessed her at about four pounds and turned her back to the river.

On the freeway, the cars and trucks were stacked up for almost 20 miles. We found our way back to The Dalles and the Clock Tower Ales in the old Wasco County Courthouse, via the old Moody Road, way above the river.

By morning, the road was clear again, although a little of that dark smoke still lingered over the water. 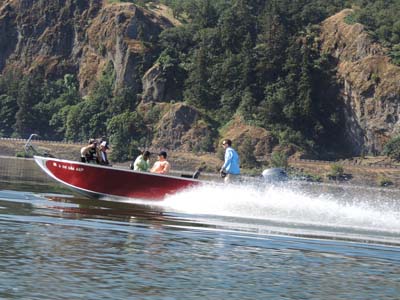 We motored west to the launch and drove to the mouth of Rock Creek where cleanup crews were at work to contain the small amount of oil that had seeped into the water.

Out in the current at the edge of the channel near Mosier, where the water drops off, we cast our offerings to one of my favorite predators, the smallmouth.
Smoke and motor oil-colored grubs are always a good bet and this day, after the spill, was no different. 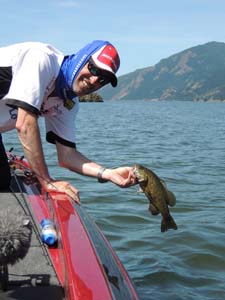 Michael Gibney with a smallmouth bass taken near the site of the derailment, the morning after the incident.

Whatever the fish take them for, they take them hard and go right to the top to tailwalk the surface, gills rattling. It all works together for good for bass fishermen on the Columbia: the railroad, the reservoirs and the riprap that holds the banks in place.

Where the water starts to drop away, where crawdads get caught in transition, we took a lot of our fish on dark plastic crawfish imitations. Funny thing is, they’re made from crude oil.