Hunting waterfowl and francolin in the Orange Free State.

"Those are British barracks from the war.” The Afrikaaner jabbed a finger at the rubble left behind when the war ended in 1902.

Farmers had plowed around the buildings for generations. The scars never quite go away. Some change the land for the better and some for worse. No one leaves it the way they found it.

Farmers build and cultivate. Miners peel back the layers to extract the minerals. Subsistence hunters record their passing inside caves and on rock walls. Their stories connect the past to the present and, I suppose, the past to the future, for the present is fleeting.

They came from Europe, Holland, the Netherlands, and from Germany and Ireland. In South Africa they call them the Boer, which means farmer, but it means so much more. Their desire was to shape the land, to work it, to be left alone. 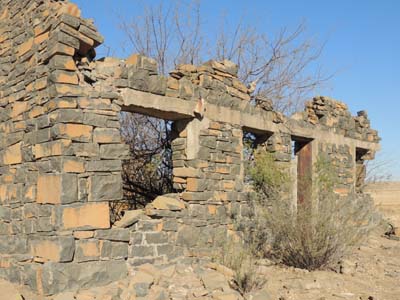 I walked through the ancient army barracks and looked out through the windows across the empty fields. Grass pushed up through the earthen floor that once shined under the English leather boots.

Isabel, who cooked the traditional meals for our hunters, also served up the stories of her ancestors, the people the British beat but didn’t quite subdue. 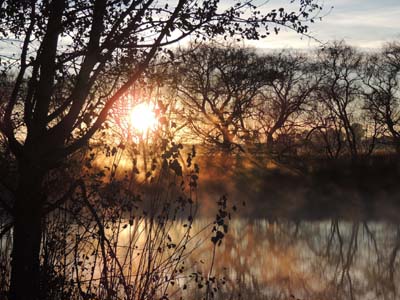 Of a morning, at a place called Vaaldam, on the river Willow, we waited for the waterfowl as they passed back and forth between the lakes and the fields of maize behind us. I used a borrowed over/under Spanish 12 gauge and took a bird we jumped out of the reeds.

This was the first day of our safari. We were in the Orange Free State for two days and over the course of the next nine, we hunt the Limpopo. For my friend Brian Smith and I, this was not our first time in Africa, but for Brian’s son, Mason, Sam Pyke from Oregon, and Jim Linder from North Carolina, this was a first safari.

Mason, Jim, and I carried shotguns, while Pyke and Smith shot with cameras.

Our professional hunter, Wighardt van der Gryp crouched behind the dam and spotted for the red-billed teal and the Egyptian geese that flew out of the sun. 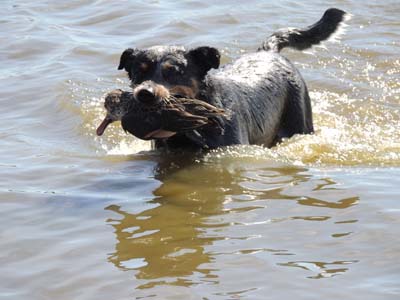 We had two dogs, a greyhound and a blue heeler, hardly the hounds you would expect on a waterfowl hunt, but I wouldn’t have traded either one. The blue heeler, when coaxed with thrown sticks and rocks, figured out what we wanted him to do.

Headed back for lunch, we spied a hare and moments later Sissy, the greyhound, caught sight of it. She leaped out of the back of the safari vehicle.

I used to have friends that would bet on the hounds. I never heard of anyone betting on a rabbit and this dog showed us why. In the course of the next half hour, we ran four hares and only one got away when it blasted under a fence that slowed the dog down. 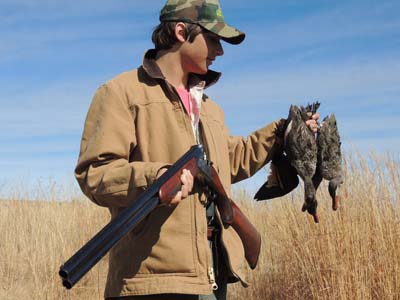 We surprised a covey of francolin in the road and dismounted. Mason took the left flank and Jim the right. We followed uphill through chin-high grass toward a small kopje.

I turned to look for Wighardt. He has a sense for these things.

Birds, when they try to escape, don’t run straight away. These would go left, I thought, and, so apparently, thought Wighardt.

We turned on Mason’s position and swept toward a fencerow and that’s when we bumped them. Mason, surprised, didn’t fire and I missed a left-to-right.

Wighardt clapped his hands like a basketball player calling for the ball. We were on them and they took to the air.

One towered trying to make its escape right over me and I stroked the front trigger even as I swung the barrel in an arc above my head to take the bird with the back half of the shot pattern. 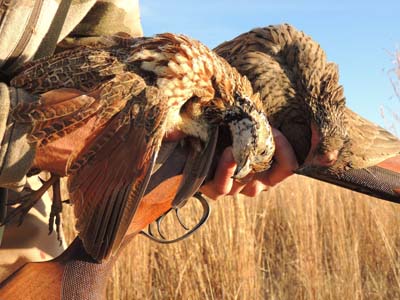 When Jim almost stepped on a bird, it rattled out of the grass and he dropped it on our side of the fence. In hand, we realized we had both Swainson’s and crested francolin in one drive.

Riding back with Leon in the Land Cruiser, I fingered the black seeds that clung to my clothing.

“Those were brought by the British,” Leon said. “All these bad things, these thorns, came in their ‘orses ‘ooves. And now they grow ‘ere and ‘ere," he pointed.

Leon reflected, “The British. You had your fights with them too.”

“But now you are kissing,” Leon said.

When gold and diamonds were discovered in the Transvaal in the late 1800's, the struggle for control of the Transvaal and the Free State began. The Brits waged a classic European campaign while the Boer fought like men of the land, striking when the advantage favored then retiring to their farms to put their crops in.

The tide of war turned when Lord Kitchener’s army put the farms to the torch and herded the women and children into concentration camps. Demoralized, the Boer capitulated.

The stories of the Boer are written in the contours of the savanna and in the lines on the faces of their descendants.

Back at the farmhouse, I told Isabel about the francolin and the seeds we brought back.

“When the British took over, it wasn’t a bad thing,” Isabel said with the charity of the third generation. “They began to plant trees. All these trees you see were brought by the Brits. They also brought infrastructure. Our spirit was broken, but now we had trees and we had hope.”