Pick a day, put it on the calendar and watch the forecast. Pray for a day when the river is high, green and on the drop.

My grandpa used to point me to the barometer and tell me when the fishing was good and when it wasn’t. It didn’t make a lot of sense then, but I watch the barometer before every trip now.

We picked the day months before, hoping to maximize our chances of tangling with big, wild steelhead.

The solunar tables said the first day of spring would be a poor day for fishing, but there was a window in the morning when fish would bite best. The forecast called for one low pressure cell after another, but between storms there would be a bump in the pressure. I always think back to what a friend of mine told me on a day not unlike this one.

“Steelhead are biters, dude!” I remind myself of that when the rainwater is dripping around the brim of my hat. As mantras go, this is a good one.

Dan Cardot and I made the drive the night before, ate too much too late and checked into one of those motel rooms you can still find on Highway 101, with paper-thin walls, moldy carpets and dirty blankets. We saved three dollars over the next more expensive motel. I would have paid $50 more to stay a mile away, if I’d had any inkling of what an active pair our motel room neighbors were.

That fresh ocean air can be invigorating. 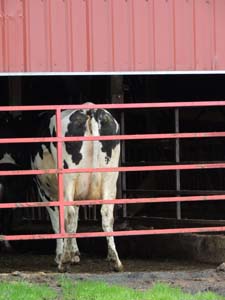 That Tillamook dairy air is invigorating.

After an hour of sleep, and breakfast at Denny’s, Brad Hanson met us in a pool of metal halogen light in the parking lot at Tillamook Sporting Goods. Only one river was in decent condition - the Kilchis. The night was still in full Stygian blackness as we drove up the narrow road.
I parked the Ford at the lower end of the first float and we drove five miles upstream, sipping at our coffees.

In the dark we pushed Hanson’s Clackacraft off the trailer, tugged on waders, and, as the first sliver of light broke over the tops of the cedars, Hanson sat down at the sticks. We floated into the current.
Fourteen river miles from her forks to the mouth, the Kilchis is one of five rivers that drain the coastal mountains into Tillamook Bay. Her brief run to the sea makes the Kilchis one of the first North Coast rivers to clear after a storm. Because there is not much likelihood of catching a hatchery fish, the Kilchis is often overlooked. Works for me.

Dan Cardot fights a steelhead on a small coastal river near Tillamook, Oregon.

With a couple of other drift boats in the river, we traded first water for a few runs then turned a corner with one boat in front of us. They pulled anchor to stay ahead.

Here the river made a right turn, broke across a gravel bar on river right and frothed over a ledge with a pocket behind a moss-covered boulder. On the far side, the bank ran jagged into the current. A nice riffle of broken water tumbled through aquamarine then the river browned out over a gravel tail.

At the business end, our baits were steelhead roe with a small yarnie, sweetened up with Pro-Cure Winter Chrome.

Cardot pitched a cast upriver; his bait and float splashed down along the seam and the float tipped up, caught in the current. 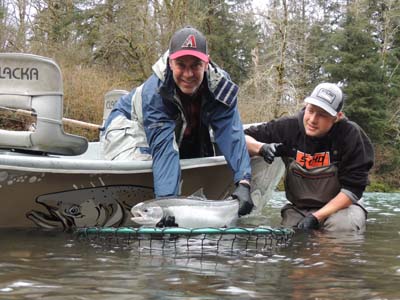 Dan Cardot and guide Brad Hanson with a chrome-bright winter-run.

Cardot’s bobber zagged upstream and he set the hook into a silver streak of fury. It cartwheeled and tailwalked from the top of the run all the way to the tailout and flashed in the sun. Bright as a new-minted nickel.

For a few tense minutes we thought we’d have to follow it through the rapids. We didn’t care about first water anymore. We wanted this water. When Cardot took the pressure off, the fish nosed back into the current and came back into the pool. Hanson dropped the anchor and jumped over the side to net the fish over the gravel bar.

Cardot cradled it a moment and let it kick into the green water. 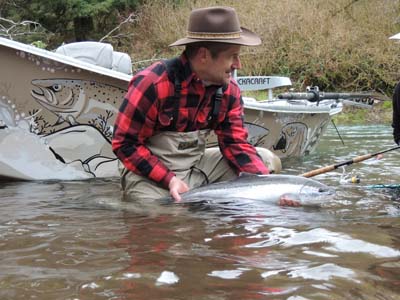 Five casts later, my float plunged and we were fast into another, this one seven pounds, a rainbow-colored male.

Beneath us the river was clearing and the fish, fresh from the salt kept eating our baits. Cardot’s third fish ran the last 400 yards of our float and Hanson netted it at the takeout. We drove back upstream to get Hanson’s rig and then parked it at the next takeout down, breathing deep of that Tillamook dairy air. 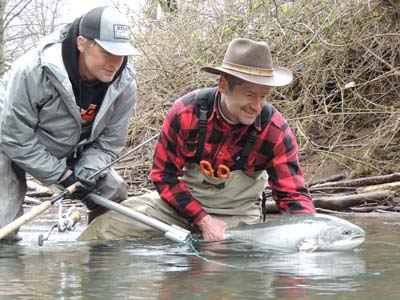 The last fish of the day was this bright wild hen that ran a hundred yards back toward the salt. Brad Hanson is a fishing guide who makes his home in Redmond, OR, but spends most of the winter on the North Coast.

When the rain started, we picked up a 12-pound wild hen, just four miles up from the salt. As wild as the morning of creation, as bright and fueled with the ocean’s bounty as any fish I’ve ever caught. This one I wanted to keep, but I couldn’t, and turned it back to make more wild steelhead.

The rivers begin to swell with winter steelhead in late December and each tide brings in new fish through January and February. Pick a day. Put it on the calendar. Tie leaders, sharpen hooks and fill spools with fresh line. March is prime for winter runs, but there are still fresh fish on every tide well into April.

If there is rain in the forecast, if the water is high, if a low pressure system is coming in over the beach, it doesn’t matter much. Soak the baits. Thump the hardware. Swing those flies deep and slow. Steelhead are biters, dude.