PacWest Outdoors: The Way of the Raven and the Bear

I dared not move. A beat of wings like a soft blanket fell through the leaves and a raven lit upon an alder branch.

Like a queen, she surveyed the scene around her and took a few moments to preen shiny black feathers. And then she began to speak. With soft trills and putts, she spoke of the day that had passed, a complex cacophony of sounds that seemed to have no pattern and to which I heard no answer from the surrounding woods.

Silent for a moment then quick as thought, she took flight, a black shape and beat of wing lost now amid the trunks of the trees.

In the stillness of the cedar swamp, the light began to fail.

What it all meant, I was at a loss to know. But Raven in Anishinaabe (the language of the Ojibwa) can be Raven-who-sets-things-right or a presentiment of things to come. Perhaps she spoke of the bear that was even now on the move.

From where the sun now sat, there remained less than an hour until sunset. The wind was at my back. I had spread a cherry cover scent earlier in the evening and I did it again to put a wall of cherry scent in the air.

Rays from the last of the evening’s direct sunlight filtered into an opening of green vegetation. And where there had been emerald green now there was black. Black like the wings of the raven. Black like a bear.

We wait sometimes years for moments like this, when out of the stillness, a bear steps from shadow to shadow.

Soundless, the bear seemed to materialize out of the green. It stopped, moved, stopped again, and tested the wind. Brown muzzle. Ears set a bit wider on its head. A fat, compact, powerful body. It tested the wind again.

I was directly upwind. I knew what it was smelling. It was smelling a cherry burst powder I had sprinkled in the wind. And it was probably smelling me.

Twenty paces away now, it circled behind the bait, its head on a swivel, nose in the air. It continued to walk a half-circle from right to left and then, out behind the trees, it turned and walked the other direction, back the way it had come. Never once did I hear a sound.

Stillness. In the Minnesota forest, up here on the banks of Lake Superior, on land owned in common with all other Americans, no wind blew. Calm before the winds and rain that were coming off the big water.

It had been four years since my first hunt with Arrowhead Wilderness Outfitters. Longtime friends Brian Bachman and Ray Crow are the owners and head guides in this camp. From the window of an airplane, this is a trackless forest, but here on the ground, it was evident Bachman’s 35 years of guiding bear hunters is a real advantage for a traveling hunter like me. 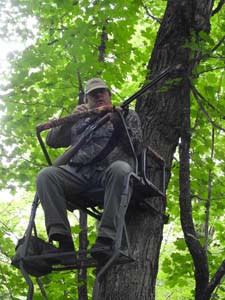 To reach the blind, we rode an ATV through muddy ruts and four miles along a two-track carved out of the trees. We walked a circuitous 60 yards from the trail to a ladder stand strapped to a cedar in a shaded glen. The trail camera showed a big bear had been using this site at 3:00pm and again before dark. We may have chased him off.

“The bears come in from that side,” Bachman whispered, “from there and there. They never seem to come from that direction.” He indicated a spot directly downwind from the stand.

It is uncanny how one man can keep track of bear movements on the 60-some stand locations he uses from year to year. But bears are not as predictable as we like to think they are. This bear had showed in the exact spot Bachman said they did not come from.

Minutes passed. There had been a moment when I could have moved the rifle and found the bear in the crosshair. No need to be in a hurry.

Minutes later it was back. In the same spot where it first appeared. This time it padded toward the bait.

We had freshened this bait earlier in the day. Peanut butter, gummy worms, and trail mix. Here in the Superior National Forest, there are so many wolves, sweet baits are best for targeting bears and minimizing wolf encounters. Now the bear was at the bait where it broke apart a clump of peanut butter.

Leaned against the rest in front of me, the rifle was ready. For many of my bear hunts I use a .30-06 stoked with AccuBonds or ABLR’s, Nosler’s long range offering. This time I had a 180-grain AccuBond in the pipe and two more waiting in the magazine. 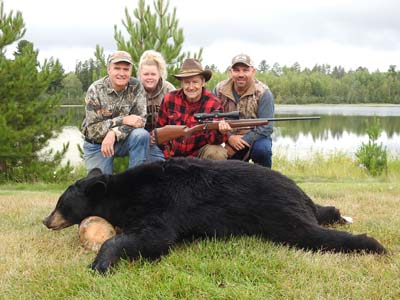 The rifle was up now; the distance a mere 16 paces from my stand to the bait. Dialed down to 3X, the crosshair glowed red against the black of the bear’s bulk. With my thumb, I moved the three-position safety into the “fire” position. The bear gave a solid broadside shot and I touched the trigger. Three pounds of pressure.

By some luck of the geometry of the rifle, the anchor point on my left palm and cheek-weld, the image in the scope held steady through recoil and I saw the bear take the impact and snap at its shoulder. It crashed away through the cedars, through the moss and the dark pools at the roots of the trees. All was stillness except for the pounding of my heart. 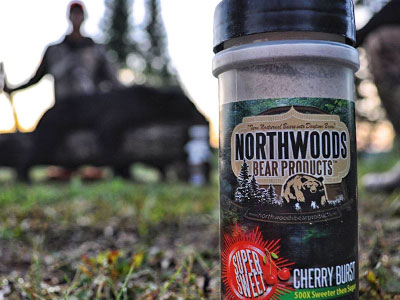 On this hunt, I brought Northwoods Cherry Burst, a powdered attractant. I waited about 20 minutes to shake out the scent after my guide walked out of the clearing.

I heard the vehicle start and drive off then I shook out the Cherry Burst, a good 30 percent of the bottle and watched the flakes hang in the afternoon air. The scent gives an added confidence boost and acts as a cover for human scent.

Gary Lewis is an award-winning outdoor writer and host of Frontier Unlimited on TV. Contact Lewis at garylewisoutdoors.com