It was her hunt to guide and there were big impala bucks in the mopane bush.

Story and photos by Gary Lewis

She was in camp with us in 2006 when we were on safari in the Limpopo. She was two years old then and now, seven years later, she was with us again. Nine-year-old Mika already could read the track of the leopard from the back of the safari vehicle and knew enough to tell a kudu track from a waterbuck’s. 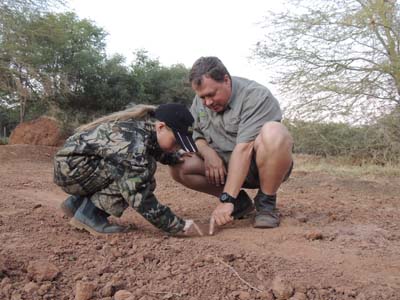 Now it was the last day of our safari and the little girl who had been so shy the first couple of days was teaching us Afrikaans while she practiced her English.

“Do you want to hunt impala, Gary?” her father Wighardt asked.

To me, it is one of the most graceful of animals as well as one of the best suited to the South African bushveldt. If it was more rare, it would be one of the most coveted of trophies. Because it is so common, it is often overlooked.

On my first safari in Namibia, I saw one small band of impala and was never able to get close enough to even take a picture. But on each safari since, I have seen many of them, hundreds and hundreds and am captivated by them all, the watchfulness and grace of the females, the jealousy of the rams and how quick they are to fight.

In a land where they are on the menu for every sharp-toothed predator, they are ever watchful, always suspicious, quick to flight. And when they run, they are a blur and when they jump, they can clear a vehicle on a two-track road. 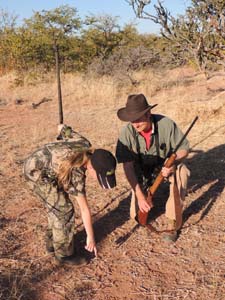 My TV producer, Samuel Pyke, on his first safari with us, had taken an impala a few days before. And I wished to hunt one more animal before catching the flight home.

“I want Mika to guide me,” I told her father. “Give her the binoculars and the shooting sticks and let her lead me to an impala.”

Mika could already judge a trophy ram as well as most people, but the trophy didn’t matter to me, a clean shot mattered on this, the last day of my hunt.

If I’d wanted a trophy, we would have sought out groups of females with one breeding ram, the male that had fought for and won the right to keep them. But we started out by hunting bachelor groups instead. We spotted two rams across a flat, tucked into a stand of mopane. They saw us as we moved through the shade and when they went on alert, we glassed them. Moments later, they streaked off through the trees. 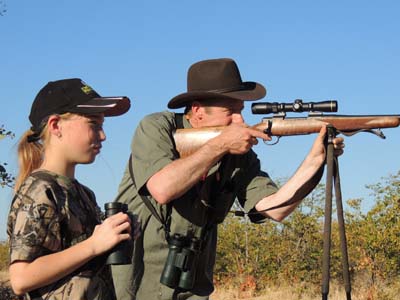 Our first stalk was blown. Mika was crestfallen. “Tell me they were too small,” I whispered.

She looked at me. This was a teaching moment. A guide can always say the animal was too small if it gets away.

“They were too small,” she said. We went looking for another.

Growing up in a hunting family, where the father is a professional hunter, a PH, respected among his peers, it is not too much of a stretch to imagine that this girl could be a licensed PH herself someday, a female hunter in a profession dominated by males.

It was less than ten minutes before we spotted the next group. Several rams were visible down a road, feeding in the tall grass at either side. A giraffe towered above them, spotted us and moved off. As one impala fed out of sight, another one replaced it. We stalked as close as we dared and then, when we were out of shade, Mika set up the sticks and I set the rifle on the rest.

“That is a very good one,” the little woman said. And then when it went out of sight and two others drifted into the opening, “The one on the right, he is the biggest impala.” It didn’t matter how big the ram was. If she said it was the biggest, it was the biggest. 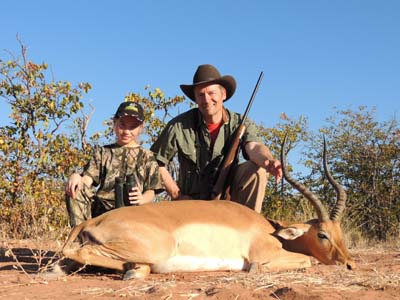 Her dad was behind us, keeping track through the trees. Behind him were the trackers who must have been shaking their heads.

Afterward, the rangefinder said it was a 251-yard shot. The 200-grain Nosler AccuBond took the impala in the neck and the ram fell in its tracks.

The trackers walked up, their tribal differences forgotten, a proud Afrikaaner father put his hand on his daughter’s shoulder. 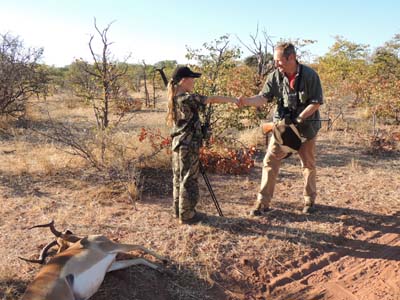 We walked up on the fallen impala and the nine-year-old led the way. She touched the animal with the sticks then turned around and shook my hand.

“That was a very good shot,” she said.

It’s all about saying the right thing.

We were set to board the plane for South Africa and a fellow came up to us. “Hey, I noticed you guys are all dressed up like you’re going on safari. I’m going to Cape Town,” he said. “Do y’all know where I can book a safari? I want to see a lion and a tiger.”

I didn’t have the heart to tell him he wasn’t going to see a tiger unless he took a detour to India.

We waited until almost everyone else was on the plane then started toward the gate behind some bow hunters also safari bound. Right in front of us, authorities stopped and pulled one of the guys out of line because he had less than 30 days before his passport expired. One little detail overlooked can ruin a year of planning.

There are a lot of little things a person should know before going on safari. The best thing to do is read a little bit beforehand. Check out travel tips from people who have been to your destination recently. Then check out a few books on the subject. Take the information from different sources. Try to get perspective from several people who have been there.

One thing they don’t tell you is you won’t be able to use the restroom until you clear Customs which can take 45 minutes or more. There were some nervous people in line.

Once Customs is cleared, the next thing to do is pick up luggage. If traveling with firearms, the guns may be transported ahead to the police office. Some airlines require a signature before the gun is released to the police. Find out in advance before leaving the baggage claim area. You won’t be able to go back and it might cost a bit in tip money.

Speaking of tip money, bring small bills. It is embarrassing to find oneself in the position of giving a small gratuity when there are only $100 bills in the wallet. 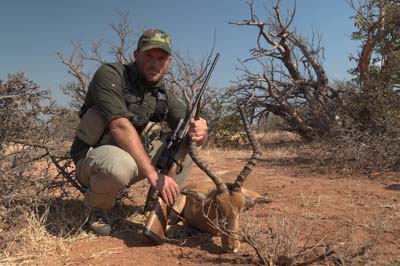 Speaking of wallets, bring a neck wallet to discourage pickpockets in close quarters.

We stayed our first nights in a rustic cabin without many of the amenities of the regular upscale lodges. After a day in the field, I was happy to have my travel towel with me. The Outgo towel folds up in a small rectangle and, having washed it at home, I trusted its cleanliness more than the towels that were used by the last 50 guests.

I also brought a Frontier water filter from Aquamira. It is easy to use anytime the water is less than trustworthy. It doesn’t take up a lot of space, either, as it will fit in a shirt pocket.

On our first night in South Africa the temperature dropped down to 12 °F, which can come as a surprise to a lot of first time safari travelers. July can be downright cold because it’s winter in Africa. Bring your long johns, but don’t expect much snow. And don’t expect snow tigers either.