According to the fellow at the feed store, orchard grass was going for $10 an 85-pound bale that year. Alfalfa was running $18 for a 160-pound bale. Each year, the cost varies according to supply and the demand.

If the mule deer out in the fields were any indication, demand was high. They streamed down out of the junipers to spread out across the fields in bunches of 20 to 40 animals between the irrigation wheel lines, nibbling at the green showing between last year’s dried-out stalks.

Other critters had their eyes on the commodity.

A sage rat streaked for his hole, head low to the ground. Another stood on his haunches like a picket pin, about eight inches high. They were hard to see at first, blending in with the dried stalks. But then a darker patch would show against the grass, the cheek and head of a squirrel, a target no bigger than a silver dollar. 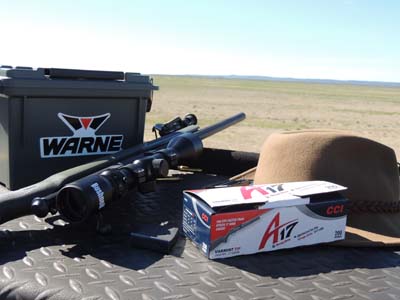 The 17HMR is one of the most popular cartridges for this type of shooting. And a varmint hunter might burn through 500 rounds in a full day of shooting.

I started with the bolt action CZ 17HMR. Topped with a high-power scope and Warne Scope mounts, it is capable of shots out to 200 yards and beyond on a calm day.

For a few moments nothing moved, save the tops of the grass. From each mound, trails radiated into the field like wheel spokes. There. A sage rat, crouched in a furrow, his back brown against the yellowed livestock fuel, magnified to 6x in my scope.

Safety to ‘fire.’ Crosshair on squirrel hair. A puff of eastern Oregon soil drifted away on the breeze and the squirrel dashed for his burrow.

Several months had passed since my trigger finger had spent this much time caressing the quarter moon. Muscle memory returned and eyes adjusted to calculate the effects of wind, distance and gravity. After 50-some empties lay spent, I switched to my scoped Ruger Charger .22. The bigger bullet bucked the breeze better, but the handgun took more concentration to score at long range.

After a hundred rounds, I switched back to the CZ and felt my groove coming back. 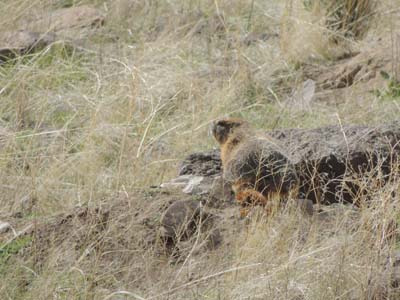 Rockchucks emerge from their dens in February and March and feed through the growing season.

By my calculations, we saved 2,503 pounds of hay that day. You saw the savings in the meat department later that year.

It was two weeks later that I got a thank-you in the mail. It was from the landowner whose property we’d hunted near Silver Lake. We read the letter on the road to Crane.

He explained how much damage the varmints had done to his crops and how necessary it was to keep them under control if he expected to take any orchard grass to market. Producing a crop that was certified organic, he could not use chemicals to control the critters. His best option, he said, was a hunter with a rifle.

Certified Organic
Out in the desert, south and east of Burns, Ore., hot water bubbles up out of the ground. A cluster of buildings surround a clean, dark pool – Crystal Crane Hot Springs.

After a plateful of steamed oysters and three helpings of Camp Chef Dutch oven cobbler, I stepped in, felt the gravel beneath my feet and the warm water creep up to my neck. 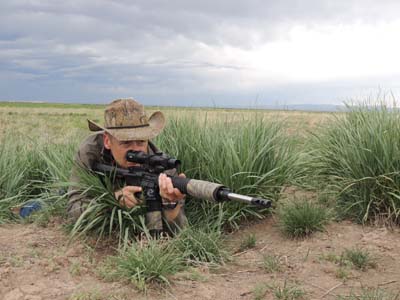 From their base at Crystal Crane Hot Springs, Justin and Nikki Aamodt, of Diamond A Guides, operate hunts for coyotes, badgers, ground squirrels, rockchucks and other varmints. They lease hunting rights from ranchers and farmers that create a win-win-win-win situation for the outfitter, landowner, hunter and consumer.

We eased into the fields when the morning sun was well up, a parade of pickups behind an old Chevrolet with a framed platform on top. After a few minutes, we saw the ground begin to move, here, there and there as sage rats popped out of their dens. We shot for a few minutes then Justin called my attention to a canyon a half-mile distant.

The badlands reeked of rockchucks. Varmint trails spidered into the alfalfa and the crop was damaged for hundreds of yards.

It’s not easy to sneak up on a yellow-bellied marmot. In the cap rock, chucks own the high ground.

We made our approach from the west and eased into the canyon up the bottom of a wash. Aamodt spotted the first one and I saw the next, a patch of russet hair against gray rock. 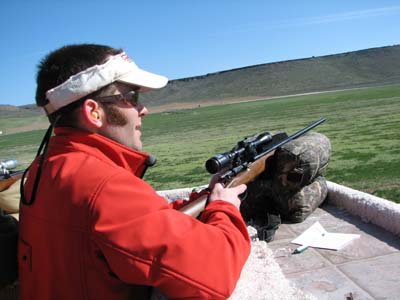 Steve McGrath watches for the next target.

We flipped and I won the toss. Two chucks fed out into the open on a grassy slide. I thumbed four rounds into the Remington, snugged it against my shoulder, dialed the Leupold to 7x and sought leg holds for the bipod. 250 yards or more at a steep uphill.

My bullet spanged rock. Chucks scrambled for cover. Now I had the range. When Aamodt spotted the next on a rocky outcrop, I held nine inches high and six inches left to compensate for the wind, squeezed.

The next one showed himself on a black chunk of lava. And then we spotted another on a slide studded with white boulders.

It was Allen’s turn. Kallel leaned back and cracked the rifle. He pushed a bullet into the chamber and closed it. Now he leaned forward, into the rock, into the rifle, solid on the bipod, on the boulder.

“See that white slide? There’s a cave below that flat rock. The chuck is right above that.” Justin Aamodt locked into his binocular with both hands and put a finger in each ear.

We were both looking over Allen’s shoulder when the bullet left the rifle. At 4,000 feet per second, the air parted around the tip of the bullet and vapor shimmered in its wake. All the way to the chuck.

Populations of Marmota flaviventris, absent well-drained fields and major food sources, don’t usually grow out of balance. But to a rancher or a farmer, making a living on the land, colonies of rockchucks, a.k.a. yellow-bellied marmots, can cause no end of trouble. A burrow might run 10 to 70 yards and go 25 to 35 feet deep. Chucks consume a considerable amount of a farmer’s crop. Burrows and mounds cause enormous damage to harvesting equipment.

In the past, poisons were often employed to keep chucks in check, but if a farmer wants to maintain a certified organic status, the best option is a hunter with a rifle.