It can be hard enough to wait nine months between deer season each year and for bear hunters, the wait between drawing tags can be much longer if you’re in a draw state. What’s a person to do? How about a spring bear hunt and fishing trip to Saskatchewan! I had the good fortune to take my son, Jacob, on a black bear and pike fishing trip there this past year. It is a trip that should be on every outdoor person’s bucket list.

Saskatchewan has a rich history of trophy size black bears. Because a hunting guide is required of non-residents, we opted to go with Rocky Russo’s Steepbank Outfitters. Every year, multiple Boone & Crockett black bears have been harvested by Rocky’s hunters. Over-the-counter tags makes obtaining the necessary license easy.

Saskatchewan also means amazing fishing, so my preparation involved as much fly tying as it did bow shooting. I have always wanted to fish for pike with my fly rod. Jacob and I spent several hours watching YouTube videos on how to tie giant pike streamers. This was cool! It was much easier to see these versus the size 20+ midges I’m more used to staring at with my aging eyes. We used 2/0 and 3/0 hooks in a variety of bucktail & marabou color combos, with and without stingers. I also hand tied several tapered pike leaders to prepare for these fish with teeth.

Rocky runs his top-notched outfit out of Eagle Lake Resort, just a few hours’ drive northeast of Saskatoon, the main hub for those that arrive by air. This was my first time flying to a hunting destination and things couldn’t have gone smoother in our travels.

Saskatoon is a large, well-kept city, but it doesn’t take long to get away from it all. We picked up a rental truck by the airport and met my guide, also Rocky’s business partner, Alain. In two hours, we left the blacktop behind and anticipation grew as we entered, what Rocky calls, the land of giants. 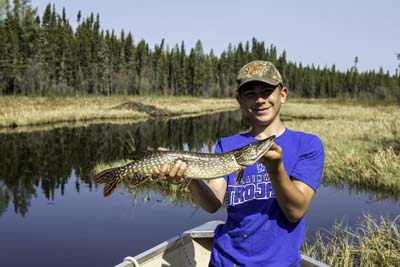 The rest of the guys that would be joining us in camp arrived the next day and we quickly got acquainted. Eagle Lake Resort’s cabins are very nice and comfortable. The six of us shared a 2-story, 3-bedroom log cabin that seemed to fall right out of a Terry Redlin painting. Boat rentals were our ticket to the pike fishing. Trucks and quads were the means to our bear hunting spots.

At Steepbank, ground blinds are the norm and tree stands are the exception. A ground level shot reduces wounding rates and improves the ability to field judge bears, but ultimately, Rocky knows how much it heightens the thrill of the hunt. I must agree.

We were the season’s first hunters, so these bears had yet to see any hunting pressure. Each night we would rendezvous at the bait cache to swap stories and offer a hand if someone needed help before heading back to camp to eat dinner. Warm weather was keeping action to a minimum, but we were having fun. On day two, Pennsylvania hunter, James Pepiot, broke the ice and killed a nice chocolate colored bear. Another Pennsylvania hunter, Chris Diperna, had some drama building at his spot.

For two consecutive nights, Rocky sat with Chris and they experienced a very frustrated, mature bear woofing and popping its jaws from back in the brush, just out of sight. The bear seemed to know the guys were there. He expressed dominance in snapping trees and stomping but would not show himself. Chris’ determination to get this bear grew. But knowing too many sits could hurt his chances, he gave the spot a break on day three. Rocky later checked the camera and it revealed daylight activity of the monster that had been evading them. Another sit was in order.

On the fourth evening, Rocky had some other matters to tend to, so he just dropped Chris off, leaving Chris alone in the now familiar ground blind. Chris had taken extra scent eliminating precautions, hoping to rule out as many factors as he could in what was keeping bears away in his presence. It didn’t take long and Chris spotted his first bear.

The confident, charcoal bruin lumbered past the bait barrel, passing, at least temporarily, the easy meal of beaver carcasses. He decided he needed a closer look at the camouflaged figure on the ground just ten yards away, hiding behind the spruce boughs. Chris’ heartbeat soared as the bear closed to within six feet, snapping and popping its jaws in anger. Even with a bow in hand and a shotgun at his feet, Chris felt powerless. If the bear decided to lunge and attack, there would be nothing he could do. A first bear encounter can’t get much more memorable than this! 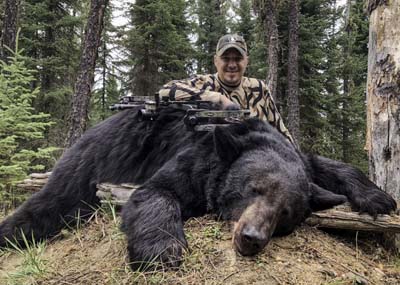 Luckily, as most do, the bear was just bluffing. It soon turned around and committed to the bait. This was a big bear, but his body language spoke to the presence of something bigger. Chris elected to pass. For the next hour, this bear made three different trips to grab a chunk of bait and saunter off in the brush to consume it. But just as Chris thought he was coming back for a fourth time a much larger black shape confirmed the appearance of the no-doubt shooter Chris had traveled to Saskatchewan for.

The giant bear walked directly to the bait, giving Chris an immediate opportunity to come to full draw. For one minute, Chris held, waiting for the bear to offer a good shot angle. As Chris was just about to let down, the bear turned broadside. Chris’ arrow flew true and the bear ran just 20 yards before expiring right on the quad trail! It was a late night of celebration over Chris’ Boone & Crockett bear.

My own hunts, although exciting, didn’t end up producing the giant I came to Saskatchewan for. I was content passing a couple smaller bears. One of them even growled at us from just five feet. Bear hunting eye to eye is intense! 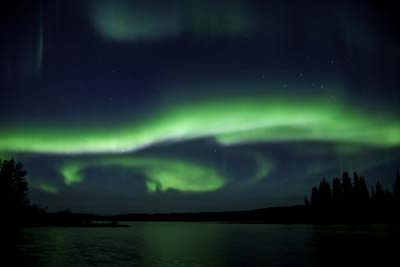 The pike fishing was non-stop action. It was spawning time, so we found the pike near a couple river mouths on the lake and caught fish nearly every cast. Red and white was the killer color combo. The pike bit and bit hard, shredding nearly every fly we threw by the time it was all over.

I couldn’t have scripted a better ending to the trip when we soaked in a show of the northern lights for over an hour on our last night in camp. Jacob searched relentlessly for suckers to thrust his homemade spear at in the wee hours from the docks. Me, I just stood there taking photos, soaking it all in, trying as hard as I could to extend the memories of this father son adventure in the Saskatchewan wilderness.