Turkey hunting tactics have evolved over the years and the equipment we now rely on to close the deal has become much more advanced. At the same time, it’s still just as challenging to sweet talk a wary old gobbler into the back of your vest. The following is what Harold Knight and David Hale have to say about how things have changed since back in the day.

Anyone who has ever yelped or cutt on a slate call during the spring is probably familiar with Knight and Hale. In 1971, these two die-hard hunters and innovative call makers transformed a small part-time business into one of the most successful companies in the outdoor industry. They were one of the first call manufacturers to begin filming action-packed turkey hunts to educate hunters and promote their hunting products. As a result, Knight and Hale have accumulated more than 100 years of combined turkey hunting experience in the field.

The two men have pretty much seen and done it all when it comes to turkey hunting. In fact, Knight became one of the first hunters to officially tag a gobbler during the historic Kentucky Woodlands National Wildlife Refuge turkey hunts when he was only 16. This event marked the state’s first legal turkey hunting season in more than 41 years. There were only 12 turkeys tagged out of the 337 hunters that season, which made Knight a local turkey hunting legend.

In the same neck of the woods, Hale also began building a reputation as a turkey-tagging machine in the area known today as the Land Between the Lakes. At the time, Hale relied on his woodsmanship and stealth to stalk and ambush gobblers. However, everything changed once he got his hands on a homemade tube-call made by a local barber named Harold Knight. The realistic sounding call enabled Hale to take his turkey hunting to a new level. Later on, these two Kentucky boys would become business partners and lifelong friends.

The early days
According to Knight, at one time there were only isolated pockets of turkeys across our nation before the NWTF and state wildlife agencies began the stocking programs that would eventually change everything.

“In those days, a hunter would be hard pressed to even find a huntable population of birds anywhere,” Knight said. “Luckily, the area where I grew up was one of the few places that still held some turkeys and from the very beginning I was fascinated by these amazing creatures.”

After his first successful hunt, Knight was hooked for life.

“I immediately wanted to learn more about their vocalizations, habits and routines,” he said. “Unfortunately, this was way before the days of outdoor television and the Internet, which made it very difficult for a young boy to find enough information about wild turkeys. I began spending as much time as possible in the woods and with some of the old timers in my community who grew up hunting turkeys. Some of these older hunters would let me run their homemade box calls and they took the time to answer all of my questions, which helped me become a better turkey hunter.”

Hale also remembers the early days of his turkey hunting career and how different things were back then.

“Many of today’s turkey hunters just don’t realize how good they’ve got it,” Hale said. “I can remember a time when you went after one turkey and you’d better not mess up on him. There were only small pockets of turkeys, which made the birds extremely tight-lipped and hard to handle, due to concentrated hunting pressure. Now, there are seemingly healthy flocks of turkeys just about everywhere you look, and as a result, the hunting pressure is spread out. It is a tribute to how successful the re-introduction programs have been in recent years. Harold and I strongly feel the NWTF and state wildlife agencies need to be commended for the phenomenal job they’ve done re-establishing wild turkey flocks across the nation. Neither of us would have ever dreamed back then that the turkey numbers and popularity of the sport would have reached the heights they have today.” 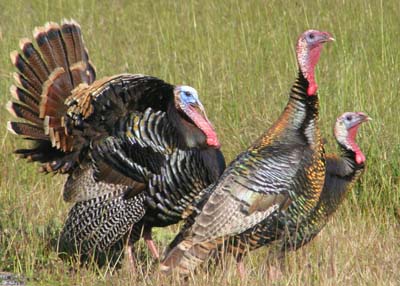 Everything changes
Knight says it’s a really good time to be a turkey hunter.

“Without question, the gear we use to hunt turkeys today has improved astronomically,” Knight said. “Everything from calls, decoys, shotguns, extended range shells, rangefinders, bows, clothing and boots are state-of-the-art. And there are more turkeys and better hunting opportunities available for the modern turkey hunter. Most places, it’s not necessary to apply for special quota hunts or drive great distances to get on a gobbling longbeard. Most hunters have quick-and-easy access to top-notch turkey hunting on private and public land not far from their homes.”

“When I was a young man, most turkey hunters took a very conservative approach in the woods,” Knight said. “Non-aggressive setups and light calling were the norm, because you could not afford to mess up on one of the few gobblers that might be living in your hunting area. Back in those days, if you heard one or two longbeards gobbling you considered it to be a great season.”

“Most hunters today expect to get on multiple gobblers every time they step in the woods, which is really not that unusual anymore,” Hale said. “Growing turkey populations have led to more aggressive hunting strategies. Like many other turkey hunters, Harold and I like to use running and gunning strategies that enable us to push the envelope and cover a lot of ground. This is a daylight and dark difference between the way we used to hunt back in our younger days.”