Toms And Gators in God's Country

Over the years, the Sportsman’s News Team has undertaken a lot of different adventures in a host of locations around the world. Our motto has always been, “Bringing the Outdoors to You!”

With new Sportsman’s Warehouse stores now starting to open across the country and especially on the east coast, our focus has started to expand as well as we are trying to include more lodges and outfitters in those parts of the country as well. 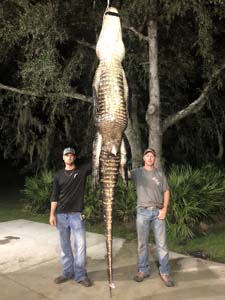 When we walked into the NWTF Convention in Nashville, Tennessee last February our goal was to find a top Osceola turkey hunting outfitter to include in our Pro Membership Sweepstakes, with our eventual goal to offer a "Turkey Grand Slam" drawing (all four major species) in the future. By the end of the show, it was obvious that God’s Country Outfitters, located in central Florida, was clearly a step above the rest.

That evening, we sat down with Charles Herrington, one of the owners at God’s Country and filled him in on what we had in mind. I told him that I wouldn’t take any more of his time at the show, but that we would give him a call and talk over all of the particulars for inclusion in our Pro Membership Sweepstakes for a hunt in the spring of 2020.

Well, as they say, this is where the story starts to take a little bit of a turn.

Mike Deming, who usually sets up most of the hunting trips for the Pro Membership, gave Charles a call and by the time they were through setting up the turkey hunt for the spring of 2020, Charles had also convinced Mike that we needed to come out and do a Florida gator hunt as well to serve as our exploratory/evaluation trip. So, plans were made and dates were set for us to visit them September 30 – October 2, 2019 for the first part of this story.

As plans were made to film the hunt for Sportsman’s News Television, we decided to bring along one of our Pro Members as the hunter. One of the first names that came to mind was one of our long time Pro Member Sweepstakes members, Eric Boley from Cheyenne, Wyoming.

Plans were made and flights were booked as we would meet up in Orlando, Florida on the morning of September 30th. By 11 a.m. we were at the rental car counter and soon we were off to San Mateo, about two hours north. 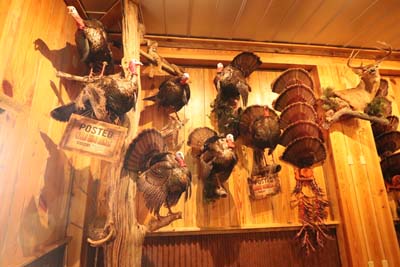 Charles met us on the highway at the entrance to the lodge and we followed him in. After some quick hellos, he led us into the main lodge. Turkey, gator, hog, and whitetail mounts adorned every wall in the building. The barrage of questions was hitting our host unmercifully, but he took them all with a smile and tried to answer them all.

We then sat down and talked about what the next two days had in store for us, as we went online to fill out our license information. Gator tags in Florida are on a draw format and essentially the outfitter and those involved in the operation all put in for tags and then they are able to use those tags to allow clients to help harvest the gators. Florida’s alligator season runs from August 15th – November 1st, but private land tags and hunts are available throughout the year. 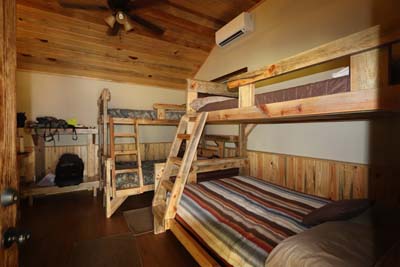 It was then off to our cabin a short distance from the main lodge to unpack and relax for an hour or so before dinner at 5:30 p.m. The rustic cabin was split in two, with one side equipped with a queen bed and its own bathroom and the other set up with three stacked bunks, accommodating up to six hunters, with its own bath as well. Really very nice accommodations I must say. There was also a guest room in the main lodge that would hold another four to six guests as well.

Our guides, RT Herrington and Nick Johnson joined us for dinner and as we gobbled up a great meal, they filled us in on the adventure ahead of us. We then grabbed our gear and loaded into the truck that was hooked up to our gator hunting vessel. Fifteen minutes later, we were backing the boating into the water and heading out on our adventure. 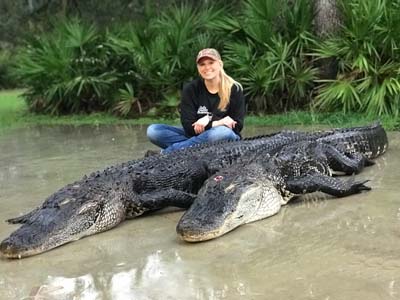 With RT at the helm, Nick to the seat at the front of the boat and Eric and I hunkered down on the back seat behind RT. We powered through some beautiful waterways as the sun started to set in the western sky. Just as dust started to settle in, we stopped in an area that had been a hot spot for them to see if there may be some action before dark.

The aura that surrounded us was peaceful, but I’ll admit – a little spooky! To our left, Eric noticed some subtle movement near a bank of lily pads. Nick then spotted a couple of shining dots along the moss-covered bank to our right. Yes, boys and girls, we were in gator country and the night was going to soon get very interesting.

By 10 p.m. we had seen and approached about a dozen alligators, but none had either been big enough or had not presented us with an opportunity to get them hooked up. Finally, at about 12:30 a.m., RT made a bee-line for a pair of eyes along a distant bank as Nick grabbed the fishing rod and handed it to Eric. RT slammed the motor in reverse and we eased into position. Eric made a quick flip of the treble hook on the heavy braided line. He slowly started his retrieve. After about a half dozen revolutions, he set the hook and the fight was on. 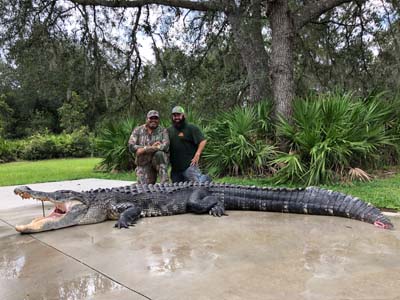 Okay, here we are in the middle of the swamps of central Florida at one o'clock in the morning fighting an eight-foot alligator on a fishing pole! RT and crew had their high-lumen headlamps on for our only light as we tried to film the excitement for an upcoming edition of Sportsman’s News Television. After what seemed like forever, but what was only about twenty minutes, Eric finally started to make some headway, but to his dismay, his big treble hook came unhooked and you should have seen the look of defeat on his face! His first confrontation with a Florida gator didn’t end up quite like he had hoped. Well, back to the drawing board.

Try as we might, the rest of the night didn’t pan out for us. We had plenty of sightings, but we just weren’t able to find one of the size we were looking for. By 8 a.m., we were back at the boat ramp and headed back to the lodge for breakfast and a few hours of shuteye.

It actually felt pretty good to hit our bunks for a few hours, since we had been up for nearly two days straight. We had flown out on red-eyes a day-and-a-half before and then stayed up all night our first night there, so now we would be wide-eyed and bushy tailed for our second night on the water. We again met at the dinner table at about 6 p.m. and formulated a plan for the evening. Since our last area had been very productive, we would again target some of the areas that they had been seeing good-sized gators in the last couple of weeks. 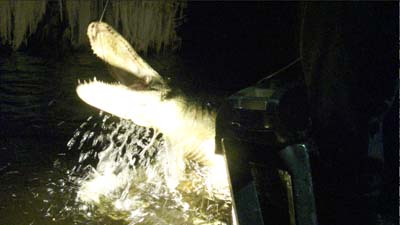 As we made our way through the darkness, a light rain started to fall. Nick threw down the throttle and headed on a rope to the tree line straight ahead. A thin pod of lily pads covered the water around us as RT pointed to the spot where he wanted Eric to cast the hook. Almost as soon as he started his retrieve, he was hooked up.

The bend in Eric’s fishing rod immediately let us all know exactly what kind of gator he had on the end of his line. This was a true monster and he was in for the fight of a lifetime. Back and forth they went. Hot runs, then slight returns. It’s a good thing there was plenty of line on the reel and Nick could help him gain a little by using the motor.

Finally, we got him to the side of the boat and RT was able to get the harpoon into him, with the buoy attached. Then as we again were able to bring the gator along side of the boat, Eric finished him off with a .357 round from the bang stick. Man, what a night and what an adventure! 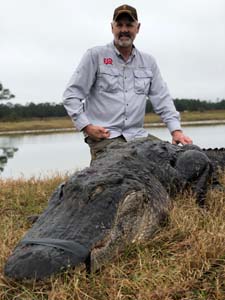 Back at the lodge, we all posed for some trophy shots and got some measurements of our trophy. Eric’s Florida gator ended up being 9’ 5”, a true trophy that he can add to the great hunting memories that he has compiled thus far in his career for sure.

Gators are just one aspect of God’s Country, as they also provide a 98% success rate on elusive Osceloa turkeys, and traditional hog hunts as well as night hunts with night vision and thermal optics.

On October 10th, the Pro Membership Sweepstakes will be giving away a combination Osceola turkey and gator hunt with God’s Country Outfitters in San Mateo, Central Florida. In addition to the hunts, this Grand Prize includes a special NWTF edition Winchester SX4 12-gauge semi-auto shotgun and has a total value of $10,000. If you want to win this hunt, you can join at ProMembershipSweepstakes.com. Otherwise, you can book directly with Charles and his crew by calling him at 386-972-9473 or visit him at GodsCountryOutfitters.net for full details.