My first conversation with Ty Bybee about trophy mule deer hunting in the spring of 2016 started something like most of my outfitter evaluation process conversations. I asked, “What can you expect to see for bucks on an average day of hunting?” His response was a bit astounding and what I expected to be a big load of BS. He said, “It isn’t uncommon to see a hundred bucks in one day”. I made sure that he repeated in several times so that I didn’t misunderstand what he was saying. I haven’t hunted many places where numbers like this were even possible, let alone be able to hunt and have a tag in my pocket. He assured me that we would see lots of bucks and if we weeded through enough of them, we could likely find one north of 180 inches. Ty told me they have killed bucks in the 200-inch range, but they aren’t behind every tree. He was confident in his product, but not cocky and in the process of reference checking Clear Creek Outfitters, it was possible that he might even be underselling his resource.

So, I booked for a muzzleloader season hunt in late September. My schedule was going to be a bit tough to get there the last five days of the hunt, but it was what we had available to do this evaluation trip.

When the opening of our hunt started, I was stuck in Quebec on a caribou hunt, due to bad weather. By the time I arrived in Vernal, Utah for our hunt, we only had three days of the season left, which had me a bit concerned. I had talked with Ty on the satellite phone and let him know the deal and he didn’t seem too concerned. He said, “As long as the season is still open, we will be okay.”

We made the thirty-minute drive from town to the ranch where we would be hunting and arrived just about daylight. There was a herd of nearly a hundred elk being tended by a solid 340-350 class bull hanging in the sagebrush. “To bad we don’t have an elk tag”, I said. We would have been done before we started. Ty assured me that we would be in bucks before too long. Most of the terrain is what I would consider winter range, which consists of big mature sage brush, rolling hills and deep draws which butt up against the mountains. You could see for miles and miles.

We pulled up onto a high point and got out our spotters. Each of us started picking out deer everywhere. The sagebrush was taller than expected and did a good job of hiding the deer, but we spent nearly an hour at this first spot and before we left, I had already spotted over twenty, four point bucks, none which were in that 180-plus range we were looking for, but pretty exciting to say the least. As we drove the truck to the next lookout, we rolled up on a bachelor herd of thirteen bucks and one was a 28” wide, heavy horned 4X3 with good eye-guards, which was surely approaching that magical 180” mark. If he would have been a 4X4, he would have been a viable candidate for my tag. So, onto the next lookout.

The higher we drove up the hill, the larger the sagebrush became and bucks started popping up right by the truck. They didn’t appear to be spooked, but if you got out of the truck, they would bolt like they were shot out of a cannon. By the time we decided to break for lunch, my buck count was up to 72 and I was sure we would exceed the 100 mark before we got to the end of the day. It was pretty obvious that Ty was conservative on his deer quantity on his ranch. I questioned him and he just smirked and chuckled and said, “People just wouldn’t believe it if I told them how many deer were here”. Now that I had seen it with my own eyes, I was believer. 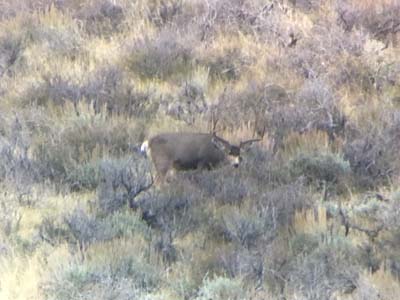 This is one of the many quality bucks we gave a pass in hopes of finding something better; and it paid off.

I finally quit counting bucks at 110 on the first day and I’m sure it was somewhere around 130-140, but I had yet to see a real whopper. Ty showed us some of the scouting photos from earlier in the year, which included bucks we were looking to find. There were a couple of bucks that would exceed that 200” mark, but he hadn’t seen them since the archery season. Once they get hard-horned in mid-September, they take on a bit different pattern and tend to be a little harder to find (This is an archery hunters paradise as stalks are the key to having success and a hunter could expect to do several stalks a day with this many deer). The problem is, there are too many deer. I was wishing I had been here during the archery hunt, but since that wasn’t possible and I’d already had one of my best deer spotting days of my life, I was okay knowing we still had two days left to hunt with my muzzleloader.

The second day was a carbon copy of the first, but towards the end of the day, I stood on top of the truck and spied a big, mature buck with dark antlers, feeding in the sage. All I could see was the top of his points most of the time, but I was sure that I wanted to get a better look at this buck. We tried to push through the sage and get a look at him, but he went the one way that provided us no shot opportunity. By last light, we had located the big boy again nearly half a mile away. He was a heavy horned four-point, with an extra on his left side, with lots of mass. I quickly set-up and made a long shot attempt, but we couldn’t tell if he was hit. Just before it was too dark to see, I picked him up in the spotting scope and he appeared to be doing just fine. I was both sad and happy at the same time. I was sad because I had missed, but happy that I hadn’t wounded this great buck.

The last morning of the hunt, we were back in the same area to see if we could find old dark horn. We had driven almost completely around the oversized sage patch, when James my cameraman said, “There he is”! Sure enough, he had come right back to where he was comfortable in the tall sage. He was less than 200 yards from where we had originally spotted him. However, when I got out of the truck, he disappeared. I stood on top of the truck for nearly thirty minutes and never got even a glimpse of this guy. I grew up hunting tall sage like this back in Colorado and I figured that this old guy had given us the slip by just laying down and hoping we would go away to look him somewhere else.

Next, we decided to set up to do a push through the sage. I hoped that by having Ty walk through the sage, the big buck would sneak out ahead of him and be watching his backtrack so we could ambush him in the shorter sagebrush. It took nearly thirty minutes to get everyone in position and start the push. It wouldn’t take long because the patch was only about 500 yards across. I guided Ty into the last area I had seen the buck with hand signals. As Ty approached the last place I had seen the buck, he suddenly rose to his feet and I could see his antler tips. He was only 20 yards from Ty at the time and would have given him a good shot opportunity if he would have held a tag. He didn’t sneak out like we had hoped or go the direction we had hoped which is normal for big bucks. However, he ran out about 200 yards and stopped. I’m sure he was looking for us as his head swiveled back and forth scanning the sagebrush.

James and I were trying to see him through the sagebrush and all that was visible was his head. As Ty emerged from his hiding place, he couldn’t handle the pressure and bolted. On his current path, he would have to come over a small hump where the two track goes down the ridge. It would be about 180 yards from us and give us an unobstructed running shot as he crossed the road. James was recording as I rose to my feet and started tracking the buck in my scope. I could see his head and the top of his back as I tracked. As he crossed the hump where the two-track was, his whole body came into view as I slowly squeezed the trigger. 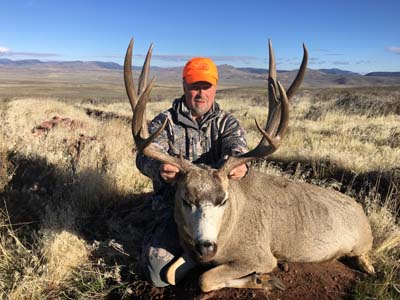 Hunting at Clear Creek Outfitters is more like deer shopping than deer hunting. We looked at over 100 bucks a day to find this shooter.

As my CVA Accura barked, the smoke blew into my face and clouded the entire scene. However, the distinct whack of a well-placed bullet told me that I had hit pay dirt. As the smoke cleared, I could see the big buck laying just at the edge of the two-track.

Although we had never been able to thoroughly judge this buck, we knew he was mature. At this time, it was too late to change our mind, but when we walked up to this buck, there was no ground shrinkage. He had four deep points on each side, with great eye-guards and extra dark antlers. He had an extra point inside of his G4. A rough stretch of the tape showed that he topped the 180” mark with room to spare. We had seen well over 100 bucks a day, had a hunt of a lifetime and succeeded in harvesting a trophy buck in only three days of hunting.

Clear Creek Outfitters is definitely a first-class operation and worthy of our Platinum Approved Outfitters endorsement. Book your trip with Clear Creek Outfitters at www.clearcreekoutfitters.com or call Ty at 801-529-5774. We have also purchased a deer and an elk trip for the Sportsman’s News Pro Membership Sweepstakes giveaway with Ty. So, don’t miss your chance to win one of these great trips by becoming a member at www.promembershipsweepstakes.com.