All my life I remember my Dad dreaming of elk stalks out West. Some would call it a bucket list trip, but for our working-class family in the piney woods of Louisiana, elks in the Rockies may as well have been leprechauns in Ireland, or at least red stags in Austria. It was one of those things we would do someday, right up there with the Calgary Stampede rodeo and snow skiing. We would get to it. Someday.

And then Dad turned sixty and retired after forty-two years of slinging wrenches and leading crews. He had me set up a winter trip to Wisconsin to try snow skiing, a monumental fail in skiing but a trophy in memories. Next he and Mom went to Canada for the Calgary Stampede. That’s when the hunt for an elk hunt began in earnest. True to his dream, Dad set up a hunt in southern Colorado for him, me, my brother, and our cousin with all the spouses coming along to have a family reunion of sorts since hundreds of miles separate us all.

The fourteen months after I mailed the check straggled by slowly, but we filled the time with that joy of preparation hunters understand. After years of only the occasional tag-along on a deer hunt, I realized I had almost no trigger time and not a thread of camouflage in my closet. The shopping came easy, and even the marksmanship training was enjoyable. On countless calls we speculated on the terrain and weather, and even my brother joined in the camaraderie by sending diagrams of elk anatomy complete with crosshair marks.

When we finally descended on the lodge, emotions ran high and that giddy camp talk sauntered late into the night. It was disappointing then when the herd we had glassed in a valley the evening before turned out to be all cows on opening morning. The evening hunt seemed unproductive too until our guide spotted a herd with at least two bulls grazing on a steep ridge across a canyon. We quickly surmised we had no hope of getting to them before sundown, but confident we had their location pegged, we began day two by splitting up. Dad and I walked the northern ridge, and my brother and cousin took the long walk to the southern ridge. The plan was simple: walk along the ridge until we got eyes on the herd in the valley between us. In old military terminology, we would open an enfilade like shooting fish in a barrel.

The elk did not understand the plan. Or maybe they did and that was the trouble. What I do know is that ten minutes into our moderate hike, our guide Antonio hissed, “Freeze!”

I craned my neck at the seemingly empty draw below and the nondescript rocks and junipers dotting the opposing ridge. Antonio stood stock still, giant binoculars pressed to his eyes.

“Oh no,” he whispered, “they are headed right to him!”

“What is it?” Dad whispered back.

“Put your glasses on that giant rock at the top of the ridge,” he directed. “Now go down three stands of juniper and over to the small opening. See him?”
I followed his directions meticulously and squinted at the unremarkable tawny splotches, until one such tawny splotch moved. He genuinely took my breath. He seemed every bit the bull the Rocky Mountain Elk Foundation logo has made immortal. Brow tines rose far over his muzzle and whale tails kicked out over his back.

“He’s watching them!” Antonio groaned and eased his phone to his ear to try to warn our partners.

With their phones on silent, they unknowingly snaked their way toward the bull, his head turning almost imperceptibly to follow their movements. When they reached the point he deemed trespassing, he spun and cantered west, the herd with him. Elk rookie or not, I knew their flight was bad news, and I felt the group’s emotions plummet. It was a long ride back to the lodge. Had the herd spooked so badly they were in another county? Would they return to the draw at evening? 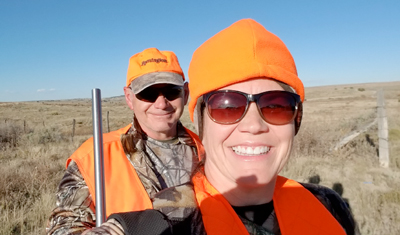 The afternoon sun found us circling the draw again, but this time casting a much wider net. Dad and I were opposite the ridge we’d last seen them while the other group began far to the south, walking toward us with the hopes of getting a shot or at least jumping them our way.

My perch was picturesque, and I couldn’t help but admire what a perfect picnic spot it would make any other day. As it was, I pulled together deadwood and made a ground blind before checking several points along the ridge with my rangefinder. The afternoon drug on with Dad heading back to the eastern edge of the ridge and restless Antonio working back and forth along the ridge.

And then I heard it. The telltale clap made my head pop up. I whispered a prayer it would be our guys and stared all the harder at the ridge. Minutes drug on before Antonio called softly behind me, “Your brother got one.”

Antonio smiled as I folded my hands and mouthed a genuine thanks heavenward. With the sun sliding down and leaving a lavender haze at the edge of the ridge, Antonio announced, “Let’s head back to the water tower. The guys think they might have pushed them that way.”

I swung my rifle and shooting sticks to my shoulder and hustled to keep up with Antonio’s long stride. I was so busy trying to keep my feet under me at a half-jog, I almost didn’t hear Antonio’s command, “Get down!”

I looked up to see him dropped to a crouch and instinctively did the same. I threw my sticks into place and rolled the scope wide to start scanning the ridge for whatever he had spotted. Every nerve pulsated, and I struggled to hear him over the pounding of my heartbeat in my ears.

“A little bull is out front with a couple cows,” he whispered. I swung the .300 until I picked him up. He was in a break between the junipers at the top of the ridge around the 250-yard range I had measured earlier. All visions of bagging a mammoth were gone; I wanted an elk, and the glint of a little horn was all the invitation I needed.

“Can I shoot him?” I asked breathlessly.

Antonio turned tortured eyes to me. I felt his desperation to see our family celebrate a kill collide with the wisdom of a sportsman as he whispered, “Let’s wait and see if there’s another one.”

As hunting stories go, it felt like an eternity. I watched the cows pass my providential shooting lane and was scanning the ridge when Antonio announced, “There’s a shooter! Take him!” 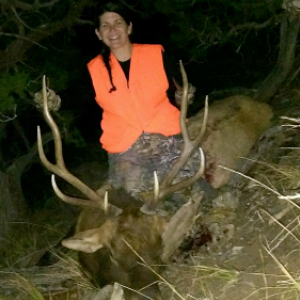 I swung the crosshairs back to the lane just as he walked into frame. Instinctively I locked on his shoulder where those diagrams advised, let out a breath, and squeezed on the trigger. The rifle jumped and I shook my head to clear my ringing ears and blurred vision before looking back in the scope to see the bull spin and dart behind junipers.

My gut twisted as I threw the bolt and exclaimed, “I can’t believe I missed! I rushed the shot!”

I swung the scope frantically trying to spot him when an explosion of snaps and pops brought my head up from the scope and to Antonio. He dropped his glasses and beamed, “You got him!”

Antonio slapped five and was off, leaving me pacing the rocks and offering up prayers. Dad appeared seconds later, breathless, and eyes full of questions.

“I think I got one,” I wheezed, and he was off toward the ridge now shrouded in darkness.

“We got him,” Antonio yelled down minutes later, and I ran on adrenaline across the draw and scampered up the rock-strewn ridge. 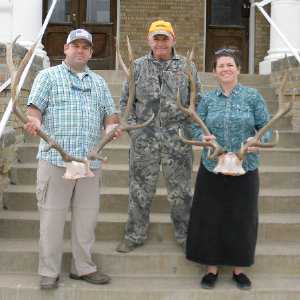 Somewhere near three hours later we pulled up to the lodge with two bulls—the modest 5x5 I took and the stout 5x6 my brother stalked. Mom and the girls piled out of the lodge with cameras, flashlights, and the insistence we eat before beginning the long night of meat cleaning.

My favorite moment? Maybe it was the way Dad’s voice broke as he gave thanks for our good day before we ate and started to work. Maybe it was the emotion as he clapped Antonio’s shoulder at the sight of me and my brother standing over bulls taken minutes apart, somehow happier than if he’d taken one himself. Maybe it was those two hours Dad and I sat on the ridge with my bull, waiting for the truck, watching those outrageously bright stars, retelling the story, and thinking of all the people back home who would be excited. What I do know is each of those moments burrowed down in a place in my heart. Experts say the average adult forgets at least three things a day. These moments risk no danger of that for me.