Most hunters have never experienced the thrill of hunting Canada geese in the field like I have. Starting out, I would never have imagined I would be where I am today as a goose hunter. Through many years of defeat came the success I have now.

My teenage years were spent waking up early and trying to beat crowds of people to a public spot, only to find out that someone had already claimed the small pond or open slough I had been planning on hitting. Later, I was fortunate to meet up with a rancher who had a small tract of land close to Utah lake. This provided my passion with jump shooting ducks and the occasional shot at a passing goose off the lake, only to find out my 20 gauge didn’t travel as far as I thought it should. Oh, but I do remember the first honker I was able to bring down with that over-and-under 20. 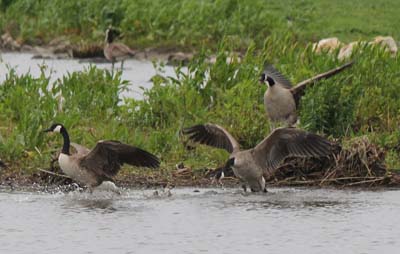 I was 16 and an after-school hunt in the slough was coming to an end when I heard a honk in the distance. I couldn’t see the flock of geese, but knew they were getting closer as the sound echoed through the trees just off the lake. I didn’t have a goose call at the time, so I tried to imitate the sounds with my voice, to no avail. I watched as they’d crossed the slough at only 20 yards high, but 200 yards south me. They glided with the south wind with minimal effort, then banked east as they floated into a small farm pond. Having previously asked permission on this pond before, I knew there was no chance of hunting it, but where the birds crossed the slough would be just a few hundred yards of wading through thick cattail and the swampy mud.

The following night, the birds did the exact same thing, as they came in on the south wind and banked back to the east, drifting into the wind on their arrival. I was now more determine to find my way over that end of the slough than ever.

The next morning, I made my way out into the slough well before light. No duck decoys this time, I was planning on pass shooting ducks if possible and then breaking a trail through the thick cattails to where the geese came in the night before.

The first half hour of light was slow, with ducks coming off, but nothing moving my way. After the first hour, I was convinced to start my way over. I picked up my Beretta 20 gauge and made countless attempts to get to the trees where they had crossed. Hours later, tired, cold and hungry, I finally reached my destination. I picked out a vantage point that I felt would give me the best view of where the birds were coming from and it proved to be good. I could see a small raft of geese out on the lake, probably 50 to 75 birds. Now the waiting game began!

Luckily for me, I had planned on a full day sit and packed a lunch that consisted of three Dr Peppers, four slices of leftover pizza and a peanut butter sandwich. As I sat back and enjoyed my lunch, the time seemed to move like molasses. Minutes seemed like hours, hours drug out like days, but as the sun dipped further west, that familiar sound started to play and the flock was getting restless.

The first group to pick up off the lake went north, the second group followed, I started to ask myself if this was really a good idea. The next group left about 10 minutes later and again followed the first. Finally, the last group lifted and my heart started to beat louder and louder until they turned and followed suit and went north as well. I couldn’t believe what had just happened. I had hiked for hours, broke a trail good enough that I could find my way back to the truck and the geese decided to change their schedule and go north. I was mad, frustrated and upset with how the day had gone. I grabbed my back pack, picked up my shotgun and started my way back before the sun went down. 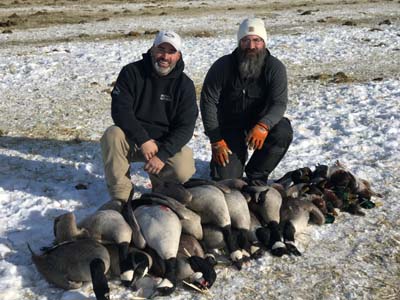 About fifteen steps into the hike, that faint sound in the distance stopped me dead in my tracks and I ducked right to the ground. Was that really a honk? It had to be. But where was it. Another honk rang out and they were getting close. There was not time to take off my back pack as the lead bird crossed the tree line. I shoulder my 20 gauge and put the bead in the center of his body to start my swing. As the barrel passed the base of his neck and toward the point of his nose, I squeezed off the trigger. The monster bird folded, as his wings didn’t even flap as he fell from the sky, I was so excited that I didn’t even pull the second trigger on that over-and-under. I marked the spot in the tall grass where he hit and like a pure bread retriever, I ran over and picked up my prize. Back then, I had no idea what a band was, but this bird had a piece of metal on its leg that I found out later was used for tracking purposes by the Fish and Game.

This story was many years ago. Today, I have graduated to field hunting with decoys, bringing a new sense of accomplishment as limits of birds come easy with the group I hunt with. It’s now more about time spent with good friends and teaching our groups’ kids the joy of calling in birds close. I’ll never forget the joy of my first bird and now countless memories with young hunters and their first goose. Nothing beats that first bird and yes, mine was well earned.