Writer's Contest: When the Hunter Becomes the Hunted

The bull elk’s high pitched, musical bugle rang through Idaho’s high country. It bounced around the still leaves of the aspens and filled every void of the bench that I was hunting on. He was close. My heart began to race as I responded with a quick challenge call. Immediately, I followed the bugle with cow calls to coax the bull toward my location. He was hooked. His second bugle revealed a direct path coming toward me from about one hundred yards away.

The morning breeze was very gently moving in a crosswind direction. I monitored it by the drifting vapor from my breath. One large pine tree with low limbs stood between me and the approaching bull. His battered antlers revealed fierce struggles with other bulls in the area. I could see his legs moving my direction through the branches. His path would take him past the tree I was crouched behind and give me a ten yard shot. Silently, I prayed that all would go as planned. It was perfect.

I drew my bow and held. Two more steps and he’d be mine. Suddenly, he hit the unmistakable barrier of human scent. Without hesitation, he spun and ran back the way he had come. My heart sank. I had been so close. It had been the dream setup—until it wasn’t.

Hoping to stop or call the bull back, I immediately let out a series of cow and calf calls as I slowly stalked the direction the bull had fled. I was watching intently for any movement—an ear flick, antlers swiveling, or anything to locate the bull. Within minutes, I felt that feeling of defeat that so many hunters feel as I moved from my original spot. I continued to cow call as I made my way along a small finger of pines.

Movement to my right caught my eye. I froze, bow and arrow at the ready, and turned to face the movement. Something didn’t look right. This movement wasn’t an elk. My mind struggled to figure out what I was looking at—a coyote perhaps? In the shadows of the pines about seventy yards away, I saw a beautiful but terrifying sight. It was a mountain lion approaching in a crouching, stalking stance. Its large eyes looked like saucers burning a hole right through me. Those eyes, windows to its soul, told me what it was doing—hunting. With a lock on my position, the mountain lion remained low as it continued to approach. My mind recalled my house cats sneaking up on mice in the same manner. It hit me rather hard when I realized that I was the prey in this cat and mouse scenario.

The stories of mountain lion attacks I had read came rushing into my mind as the adrenalin dump began to course through my veins. I could feel my body shaking a little. Then, the big cat stopped in his crouched position at about 30-35 yards. Those eyes never left mine. He just laid there watching, waiting, and tearing through my camouflaged clothing. "Would I be his next meal?" was the thought that passed through my mind.

Having a mountain lion tag comes with my Sportsman’s Pack license I purchase each year. I had never used my lion tag in all my years of hunting because I’d never seen one. I had seen plenty of sign but no lions. My mind shifted from potential victim back to the predator mode, switching the roles, yet again, on the predator that was stalking me.

A small tree lay between us. Thicker pines lay to my right. A small open area lay to my left. I began to mentally prepare. Maybe the lion would go left and give me a shot. If it went right, there would be only one small opening where the shot would be possible. What if he came straight at me at a run and leaped at me? So many thoughts rushed about inside my head as I wondered when the lion would make its next move.

The sun was peeking over the ridge now. Half of my body was in the sun. I could feel the heat beginning to increase within my hunting clothes. I wanted to move into the shade, but I couldn’t. The lion was still watching with keen interest.

After about thirty minutes, the mountain lion began to look left and right. I was beginning to think it was losing interest in whatever it had seen moving through the trees. I was still holding my bow at the ready with the lower pulley resting on my thigh. I was still frozen like a storefront manikin, but that all changed in an instant.

The mountain lion snapped its gaze back to me and locked on again. I could clearly see that it had a renewed interest in me. I hadn’t moved. I hadn’t made any noise. I was barely breathing. Why it renewed its interest so quickly is still a mystery.

As luck would have it (bad luck was being served up in large portions that morning), the lion began a low, slow, creeping action toward me. Its eyes were glued to mine again. The head didn’t move up and down. It was fixed as its body moved over the shady forest floor. The small tree between us must have prompted the lion to turn to the side. The thicker side to my right became the angled path of the lion. At about 25 yards, I lost sight of it in the trees, but as it began to approach the only small shooting lane, I could still see that it hadn’t taken its eyes off me. It glared at me, watching for any movement.

I realized that I would have to be at full draw when the lion crossed the small opening. There wouldn’t be any chance of drawing and firing as it slipped by the small area, so as it approached the opening, I drew my bow. The mountain lion froze momentarily. I needed to rotate about ninety degrees to shoot comfortably. As the lion took another two steps, I rotated. Still watching me with those piercing eyes, he froze again in the center of the small opening.

I centered the twenty yard pin behind his shoulder and released the arrow. At that range, the arrow was there quickly. The big cat leapt into the air skyward and ran back about ten yards before stopping and turning back to look at the arrow lying on the forest floor. I began to wonder if I had missed. I had instinctively placed another arrow on my string and as the cat continued to look in wonder, I released another arrow that struck him behind the shoulder but a little higher than the other. Jumping, clawing, and scrambling, it ran from the trees toward the area it had come from. I heard what sounded like a struggle in the trees about fifty yards away, and then, the forest went silent. 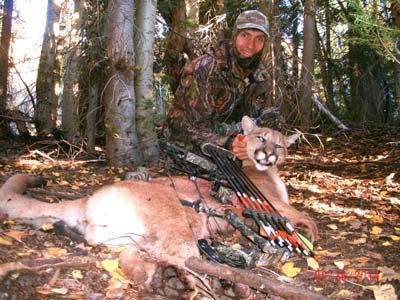 My excitement was elevated. Finally being able to move, I quietly checked the arrows that were both lying on the forest floor. They were covered with blood. I knew the big cat was mine, but I waited for twenty minutes to ensure it had time to expire peacefully. During those twenty minutes, I reflected on what I had just accomplished. Decades of hunting and I had never even seen a mountain lion in the wild. Today, I had learned how to hunt them accidentally by becoming the hunted. The blown elk opportunity had become a new and better opportunity. I thanked the Creator for not answering my prayer earlier and letting that elk live. Had I shot the bull, the lion would have never been mine.

The trail to the lion was clearly marked with the crimson blood from the four holes in its sides. A few minutes later, I was standing over my mountain lion. It was a beautiful male. My adventure had changed from an elk hunt to a mountain lion hunt. The momentous morning had been filled with imperfect and perfect events that will be forever cherished as an unforgettable part of my hunting experiences. It was, in fact, the best hunt of my life. The element of danger, of facing a predator with nothing but a bow and arrows, and of hunting solo deep within the forest had merged into the perfect hunt.

As I knelt over my trophy in reverence, I gave thanks for the missed opportunity that had brought a far greater reward. I paid respect to a fellow hunter. Predators may become prey—so be watchful. Hunts don’t always go as planned, and I’m grateful for it.