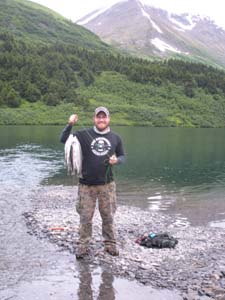 It all started at the dinner table in deer camp in Northern Wisconsin during November of 2011. An off-road racing associate of my best friend announced that he was thinking of undertaking a building project on a newly acquired piece of property in the Kenai region of Alaska, sometime in the next couple of years. The part that caught my attention, was Charlie’s proclamation that all workers on his build-out would be granted use of his northern house for future Alaska adventures. I immediately knew that I was in!

The project was scheduled to begin in June of 2013. I confirmed my commitment with Charlie and met him and the rest of the team in Sterling, Alaska, the second week of June on an empty lot. It was there that we would battle unseasonable heat and mosquitoes for two weeks, at which time the foundation was poured and finished, and the framing and roof completed. By the time Charlie left for home in the lower 48 a few weeks later, the house was weather tight. An amazing feat for five people to have accomplished. I have always wanted to participate in a ground-up build out of a house and now I had done it.

My recurring thought, however, was on returning someday to enjoy the home and hopefully take part in some kind of fishing or hunting adventure in the Last Frontier. The project was planned as a 3-stage, 3-year endeavor, so I would definitely be waiting for some time. Phase-2 went on as planned, without me, but I returned in 2015 to help the owners complete Phase-3 which included interior work, sheetrock and other finish work for their new Alaska home.

Once again, we battled mosquitoes and long days in the land of the midnight sun. You really do have a prolonged ability to stay awake and energized when the sun is still up at 10:30 at night. When I left that summer, I knew that the next time I returned, it would be strictly for pleasure and adventure in the wilds of Alaska.

My plan and request for return would be in July of 2017. I was told by the locals that mid-July is prime time for most of the great fishing that America’s 49th state has to offer. All of the final touches had been completed on the new home during that two-year stretch and all I had to do was endure my job, a move to California and working out the particulars of a fishing trip to Alaska. I had hoped to have my brother and some close friends accompany me on this trip, but as it turned out, my son was the only one to commit. There is no one with whom I would rather share the experience than him. I was very happy to be a part of fulfilling a lifelong dream for him. In the six months prior to our trip, we made all of the necessary arrangements for flights, transportation, charter outing and gear, and, before we knew it, we were off to Alaska for eight days of fishing and exploring. 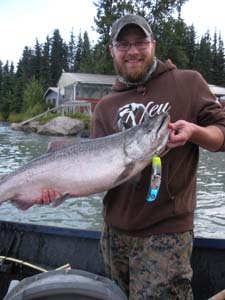 My son and I arrived in Anchorage on the 14th of July, 2017, in the middle of the night, spent a few hours dreaming of the weeks’ promise of excitement and waited for the car rental counter to open. Around 5:30am, we got our vehicle and headed out for Sterling. When we arrived, we found the most beautiful Alaskan home imaginable! It would be our camp for the next eight days. I had not seen the finished product previously, so I was delighted to see Charlie’s new home completed in such a gorgeous fashion. We would indeed be in the lap of luxury for the next week; in sharp contrast to our fishing brethren sleeping in tents, campers and the like while in search of Alaska’s bounty.

Our first day of fishing would be at the confluence of the Russian and Kenai Rivers. We rigged up our spinning rods with one-ounce weights and Russian River flies and set out to take some reds. We spent the day being schooled by those sockeyes and the fishing method called “flossing.” We witnessed some nice fish being taken, had a few on, but left the Russian with zero fish bagged. Fortunately, we had a plan-B for the day. It was to hike up to Carter Lake on the road to Seward and try our luck at grayling and rainbows.

After a mile and a half hike up to the lake, we found ourselves alone in an alpine wilderness of unsurpassed beauty. Time to wet a line! After about three casts, we ended up in a two-hour battle with some of the feistiest rainbow trout you’ve ever seen. On small spoons and spinners, we caught a limit each, with some up to twenty inches. I have never had so much fun in such a beautiful place. Or so I thought. 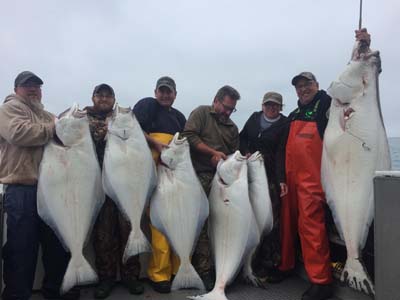 The next morning, we would be pursuing Pacific halibut with Fishing Fool Charters out of Ninilchik. We were at his storefront at 5:45am and would return by 12:30pm with over 400 lbs. of halibut from six people’s efforts, the largest one tipping the scales at 140 lbs. The Captain, Jeff Glosser, single handedly ran the boat, helped gear us up, land the fish and cleaned everything before we returned to land. An amazing job! I would highly recommend this man, as he is focused on getting into the larger fish, not just bag limits. We discovered, later that evening, that we would be going on a drift boat hunt for kings on the Kenai River the following morning.

Some sleep would be nice, as we barely had seven hours rest since landing Friday morning. Early Monday morning, we paired up with a local friend, Matt and another drift boat of his pals/competitors and hit the Kenai in search of king salmon. We would be passing through the very same waters where the world record king was caught back in 1985. Within 15 minutes, I had on the first fish of the day. It was at least a 35 pounder, with wonderful blush coloring from its days in the fresh water. By the time another hour had passed, each of us in our boat had hooked up with a Kenai king. These guys were into catch and release, so we gladly obliged and relished in the landing and releasing of these awesome fish. We did keep two injured fish out of the seven we landed—apparently a stellar day for those who chase kings on the Kenai River. We got an education on drift boating and many other things that day. Eternal thanks to Matthew for giving my son and I an experience of a lifetime!

Tuesday and Wednesday were set to be “get even” with the reds days, so we packed up and went after them in a new location with spinning gear, half-ounce weights and 3/0 hooks adorned with pink yarn. Standing side-by-side with dozens of other fishermen and women in full “combat” mode, we battled the sockeye salmon, which were not in full migration up the river. The counts of reds in the river, at that time, were reported to be around thirty thousand, way short of the 100,000+ we were told is possible when the “run” is full-on. One lady told us that she and her husband caught over eleven hundred fish in a one-week period during a big run of past years! We met some wonderful people from Texas, Michigan and California, who were gracious enough to help us with this unorthodox method of “fishing.” Fisherman and hunters are the best people to meet when you are in new territory. We had a fantastic time and actually bagged a few reds and some Dolly Varden trout.

I told my son, before we left on our trip, that I was not planning to fish every day of our vacation, because I thought we should sight-see a bit, as well. We fished every day. It was just too much dog-gone fun! What a place, what an adventure and what marvelous bounty we were treated to. They’re not doing this in China! I can’t wait to go back and again try my hand at the Arctic grayling, which eluded us on two visits to their secluded hideouts. I think I’m going to have to relocate to the Last Frontier—it’s all I think about since I returned home.