It is time to tell the truth about Steelhead Bob. I probably should start from the beginning. I knew Bob before he became “Steelhead Bob”. Before, he was just another trout fisherman from Montana. He was pretty good at his sport. In fact, he was looked upon as somewhat of an intermediate, well, maybe more than that. But you know, until you earn the title, you’re just another trout fisherman.

Well, I have to start at the beginning. I finally decided to take Bob to steelhead heaven, The Deschutes River. Because Bob was used to the best of life, I decided to float down to meet him. This way, I could carry everything to make his trip enjoyable (including a toilet). Because of this, the boat was dangerously loaded; floating through the class 3 and 4 rapids became life threatening. However, I would do anything to make Bob and Judi’s first trip to Heaven a great trip. The first stop was just below Mack’s Canyon. The evening was late and the river did not give up a fish. However, the morning was better. I took one hatchery fish of 24 inches that was to be our first meal with Bob and Judi. This was my camp the first morning.

That evening, I drifted down to Green Light, one of the best spots on the river; a hole that has produced for me in the past. Not so tonight or tomorrow. Could this be a curse? The deadly rapids come next. But for Bob and Judi, nothing is too dangerous. Somehow I made it through. After the last rapid I started to look for Bob. And there he is, Bobby “Whiteshoes”. I identified him from a half mile by those trademark white shoes. He had lived through the roughest part of Oregon and made it to the river. My relief was plainly visible on my face as he approached the campsite. Luckily, two other friendly Oregonians from Eugene were holding our spot. 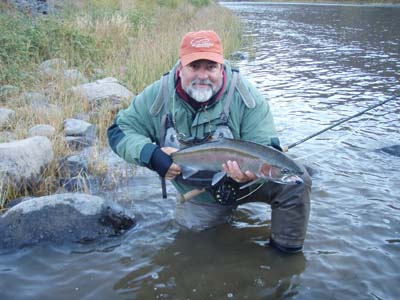 There were some problems with bike transportation for Judi and Bob but those were worked out. Once these were accomplished, the work of getting “Whiteshoes” into his first real fish began. To start with, I had to cleanse him from the inside. To do this I had to first pour alcohol into him and then have him eat a fresh Deschutes steelhead. Once this was done I could let him step into the run. He was close to being one with the fish. Bobby W went through the “Camp Hole”. This is one of the best runs in Oregon. The wading is tricky; the currents treacherous and the rocks are similar to greased bowling balls. Bobby survived but no fish. He was shaken to say the least. I told him his only chance to hook up was to go to the dreaded corner. Many men have refused to step into this area. Snakes line the banks and a false step will send you down through rapids that will not release their victims. Yes, B was shaken. I encouraged him. He said it was too dark. I told him he had the fish in him. He had to let it out. He stood, with a haunted look in his eyes and said, “lead me on.” We headed down for “THE CORNER”. We waded in together. I stayed upstream of B to break the current. I told him to cast out into the dark water. “Let your fly hunt. The fish will come!” And then it happened! A wild steelhead grabbed the fly. It immediately leaped clear of the water. I had to grab B’s waders to keep him from following the mighty steelhead into the dark depths. The large reel held the fish and the rod bent near the breaking point. With both our best efforts we made it to shore. Somehow, the fish stayed connected to the fly. Bobby “Whiteshoes” landed his first wild Deschutes Steelhead! He had become the fish. He had become, “Steelhead Bob”. 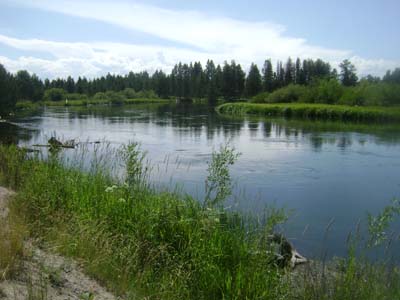 Bob and Judi had to ride out in the dark that night. Bob had no fear. He said, “Headlights, we don’t need no stinking headlights.” I admired his courage. However, I decided he should still use the headlights. As it was, Judi ran over a rattler that almost upset her bike. She had air coming off that snake as it acted like a ramp on the trail. Braving porcupines and skunks they made it out safe and sound.

The next day was similar to the first. I knew “Steelhead Bob” no longer needed my help. He was one with the fish. I became one with the fish. My first fish cleared the water 8 times before coming to my hand. Some flies must remain a secret. One in particular must stay in the box. It is said that this fly must be kept in the box or in the river for fear of fish jumping on the bank to eat it. And yes, our hero, “Steelhead Bob” caught another in the corner.

The river turned angry after that. No more fish were to come to hand. We had gone to the water enough for one trip. Oh, don’t make a mistake. “Steelhead Bob” will return. He may get Judi to brave the water next time. Until then, the fish have a break and Bobby Whiteshoes will be forever known in Oregon as “Steelhead Bob”.