How did I get into this anyway? I saw my friend Louie at the square dance after season. “Hey Louie, did you get your deer this year?”

“No... and neither did my brother, CL” responded Louie. “We hunted Wyoming and even Mexico and did not get a deer”.

“Well, there is always next year,” I said, trying to put an upbeat spin on it. His rejoinder was nothing close to positive.

Louie and I went to school together and his brother was older. I didn’t really know his brother, but thought it would help if I promised to take him next year (if he was still alive). Louie told CL and he said to plan for it; we would try. Louie and CL grew up on a ranch and worked hard for the family. Anything that needed doing on a ranch was their job. They learned to care for and butcher the animals. They learned to operate and repair all the machinery. Fences, building repair, wood cutting, they did it all. They had a good childhood but it was full of work and love for the family.

What had I gotten myself into? I must be crazy to promise a dying man I could fulfill his ultimate “bucket list.” The next 8 months were a constant whirlwind of furious activity trying to find a suitable place and outfitter. I must have called 30 outfitters. Emails to another 30. Constant internet searching. I must have attended 10 outdoor shows. I must have read and re-read 100 magazines. Nothing! The outfitters I talked with wanted to switch CL to a big elk, caribou, moose, or other game. Meanwhile, CL was getting sicker.

Cancer of the pancreas is a killer. It is like a bully at the school grounds. It is always there and shows up when you least want it to. It has no respect for your fears or discomfort. Michael Landon could not beat it, my Uncle Chappie couldn’t best it either. CL knew. 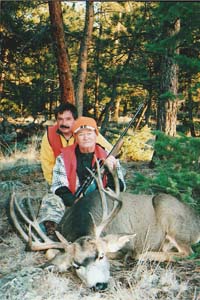 CL and Mike show off his bucket list buck.

Then I got a call from a special man. He told me after I spoke to him that God had told him to do this. I am not a pious man and this was a bit of a surprise. There were some hurdles, however. His guiding was for international hunting. That included alligators, caribou, ibex, red stag and stuff like that. He wanted CL to pick something from that list. Like I said, I understood when CL replied “I only want a big mule deer”.

That special man was an outfitter named Mike. He said he would take CL on his family hunting trip in the fall. He did not have a license to guide in his home area of Colorado so could not charge. He did require two hunts for other species to cover the cost of hunting. Apparently, God wanted him to have remuneration. CL was not going on any other hunt so it was my wife and myself that were headed for Scotland and a Red Stag Safari.

Mike was the perfect host on the hunt and we had a swell time. We stayed at a Scottish Castle and enjoyed ourselves immensely. That is another full story, but now CL had the trip for a deer hunt in Colorado covered.

Well almost. You see, CL had to hang in there and we had to secure a tag in this desirable area in Colorado. Again, Mike came through for us. He was able to secure a land-owner tag (for a substantial fee but still under the going rate).

Opening for the season seemed to slowly drift. The final tally was four of us planning for the trip. There were Louie and I, and CL and his son. Louie and I would get tags for a less desirable area nearby, so we could hunt also.

Fall was nigh, and CL was still able to get around. He was tired most of the time and had to push himself, but he was game. 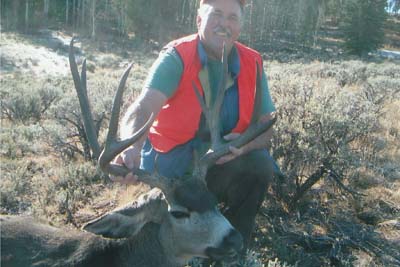 The author with his deer.

We stopped at the Fish and Game office in Colorado and secured the tags, licenses and permits. Next morning was a chance to see the country and Mike took us around. We were in CL’s hunt zone and saw several bucks. Some even 4 points but we were looking for something “BIG.” Mike got ready for his family hunt the next day and had a friend take us around. This time we checked out the area where Louie and I had tags. Again quite a few deer and many bucks, but just not what we wanted. The third day was CL’s hunt with Mike, and Louie and I were on our own. We had another good day but did not connect. When we got back to the motel, there was CL with a great deer. It was a 6x7 with great mass and long tines. CL had his bucket list complete. Next morning the deer was taken to the local taxidermist. The mounting of a trophy deer is usually a one-year wait. We explained the situation to the man and he said he would see what he could do. 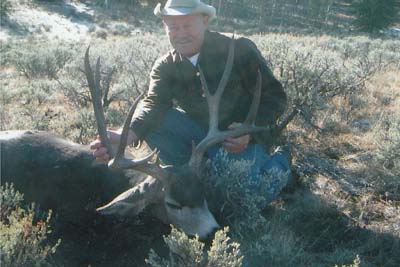 Louie with his deer.

Louie and I hunted while CL rested. Louie got a great 4x4 and it went to the taxidermist also. Wow, what a hunt! I was holding up the show, so I quickly scored on an average 4x4 and we were done. CL and his son had headed for home and Louie and I were not far behind. After picking up the meat we also drove home.

CL was a happy man. His mounted deer arrived in January and his son put it up for him to see. One week, later CL was gone. Somehow, I think he was waiting.