Kelly and I sat on the back of the boat, debating, adding on an additional day to a fantastic 4th of July weekend. We discussed missing all the heavy traffic on the drive home, problems with pumping out the boats, however, these were just excuses to fish one more day.

We had been boat camping with a bunch of our friends, playing horse shoes, listening to great tunes, swimming and chilling with a cold one now and then. I had taken my fishing boat, to keep me entertained early in the a.m. and at dusk. I had a continual line of volunteers, willing to go fishing with me. Bill was one of the lucky guys to get to go and he caught a couple of really large fish. 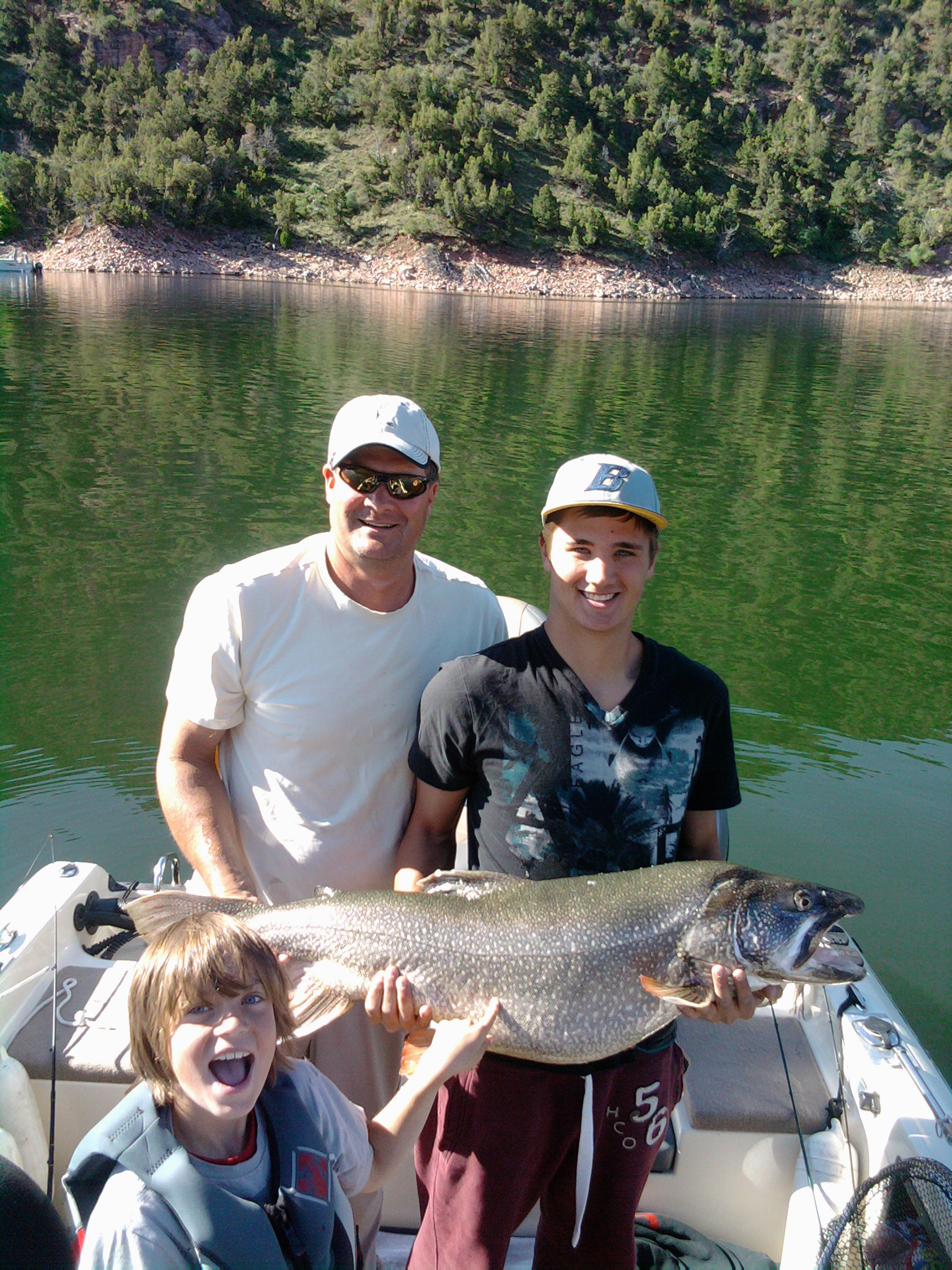 Fishing for large fish at Flaming Gorge is a lot like hunting. You spend time cruising around at low speed looking for big fish in 50 to 100 feet of water, using a fish finder. Sometimes that is the easiest part. Getting these big boys to hit a rubber jig takes finesse and patience.

We fish out of a 1880 WX Skeeter, equipped with a Minkota electric trolling motor, 8 horse power Yamaha kicker motor, and a 200 HP Yamaha when we need to get around the lake. Flaming Gorge is 100 miles long and 1 ½ miles wide in some areas. The larger fish can put up a tremendous fight and have towed this boat at ½ mile per hour.

The lake on a holiday weekend can create a challenge of its own. Boaters, skiers, wake boarders, and people out having fun. Finding the fish and staying over them with the waves and wind can add to the challenge. Minkota helps solve the problem with their anchor in place technology.

Kelly and I convinced our wives to stay one more night. It really didn’t take a lot of convincing, as we knew it would be a chance for all of us to relax from all the hustle and bustle of the weekend.

Kelly and I got up early and headed out. We cruised around one of our favorite spots and spotted a fish at 90 feet. Kelly was lucky and got a bite. After a short fight, he landed a 12-pound lake trout. We continued to look, but couldn’t find any more in the area.

We decided to cross the lake and check out a different spot. After cruising around looking for fish, without finding any, we were debating whether to stay at this end of the lake or to move and go up the lake. We still needed to pump out the holding tanks on our bigger boats, put them back in their slips and cover the fishing boat. We decided to hang right where we were due to the limited time. 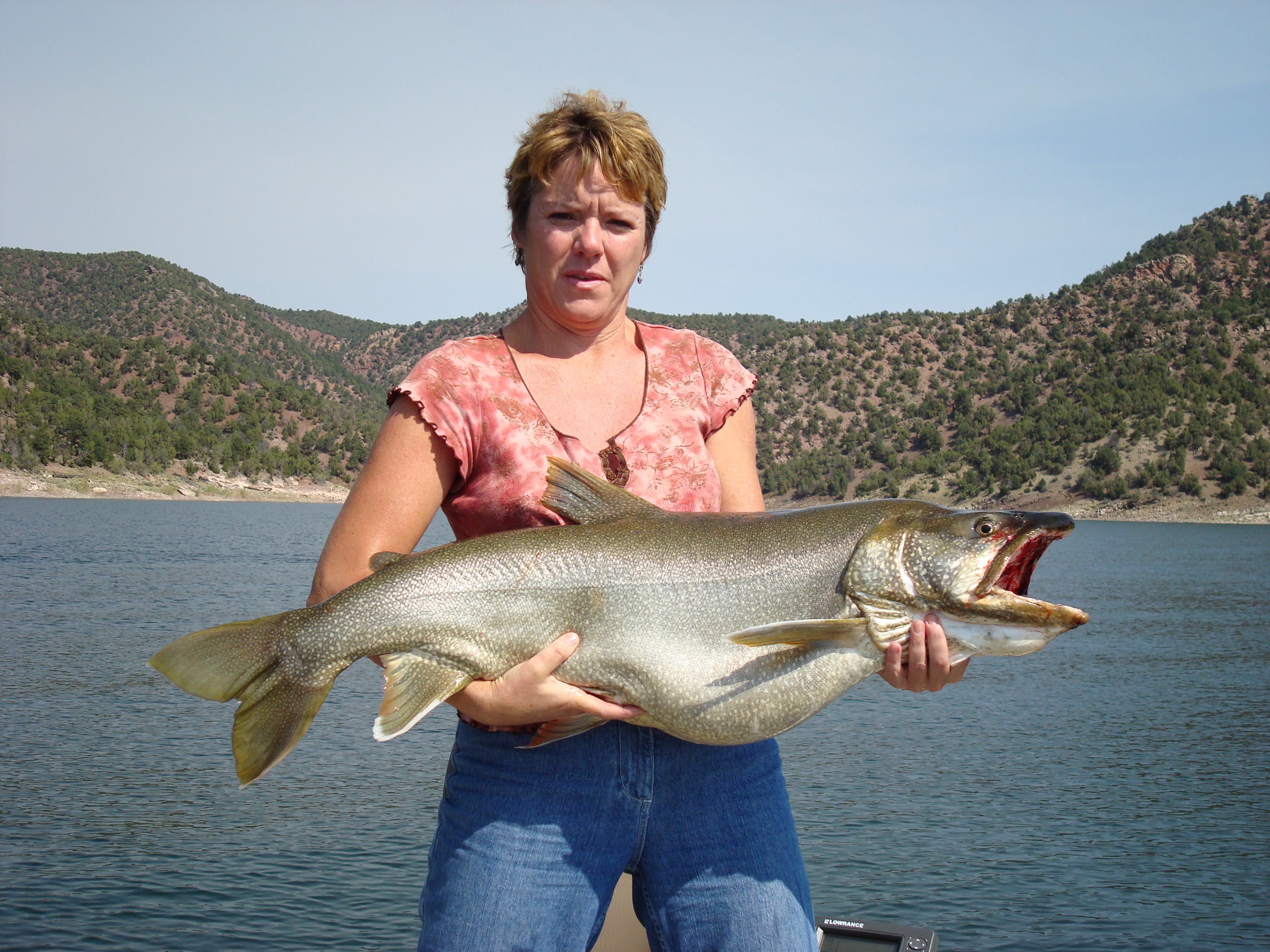 We hadn’t moved more than 100 yards from where we were chatting when I spotted a couple of fish, after stopping the boat and getting back over the fish we were ready for some action. The anticipation of one of these big fish grabbing your jig makes your heart race a little. You would think that these big fish would rip the pole out of your hand but that is not usually the case. They suck the jig in and as soon as they realize it is not real they spit it out. You have to be ready and set the hook the minute they suck in the jig. It didn’t take long for these fish to give me a chance and luckily, I hooked a fish within the first five minutes.

I told Kelly not to bring his jig all the way up to the top, but to leave his jig about five feet off the bottom. I could see on the fish finder there were several fish moving with the fish I had just hooked. Fish when they are hooked will try and spit the jig out and a lot of time they will end up chumming from their stomachs in the process. Shortly, after the comment, Kelly hooked up and we both had a fight going on.

I was having trouble getting my fish up off the bottom. I would get the fish upto about 60 feet off the bottom and it would dive back to the bottom. Kelly was doing a little better but was still fighting his fish. Because we were alone, I kept my line tight, extended the large fish net to full length, got the scale out of the glove compartment, and my camera cell phone ready for a picture; all the while fighting my own fish with one and a half hands; no easy task when you are fighting a big fish of your own. 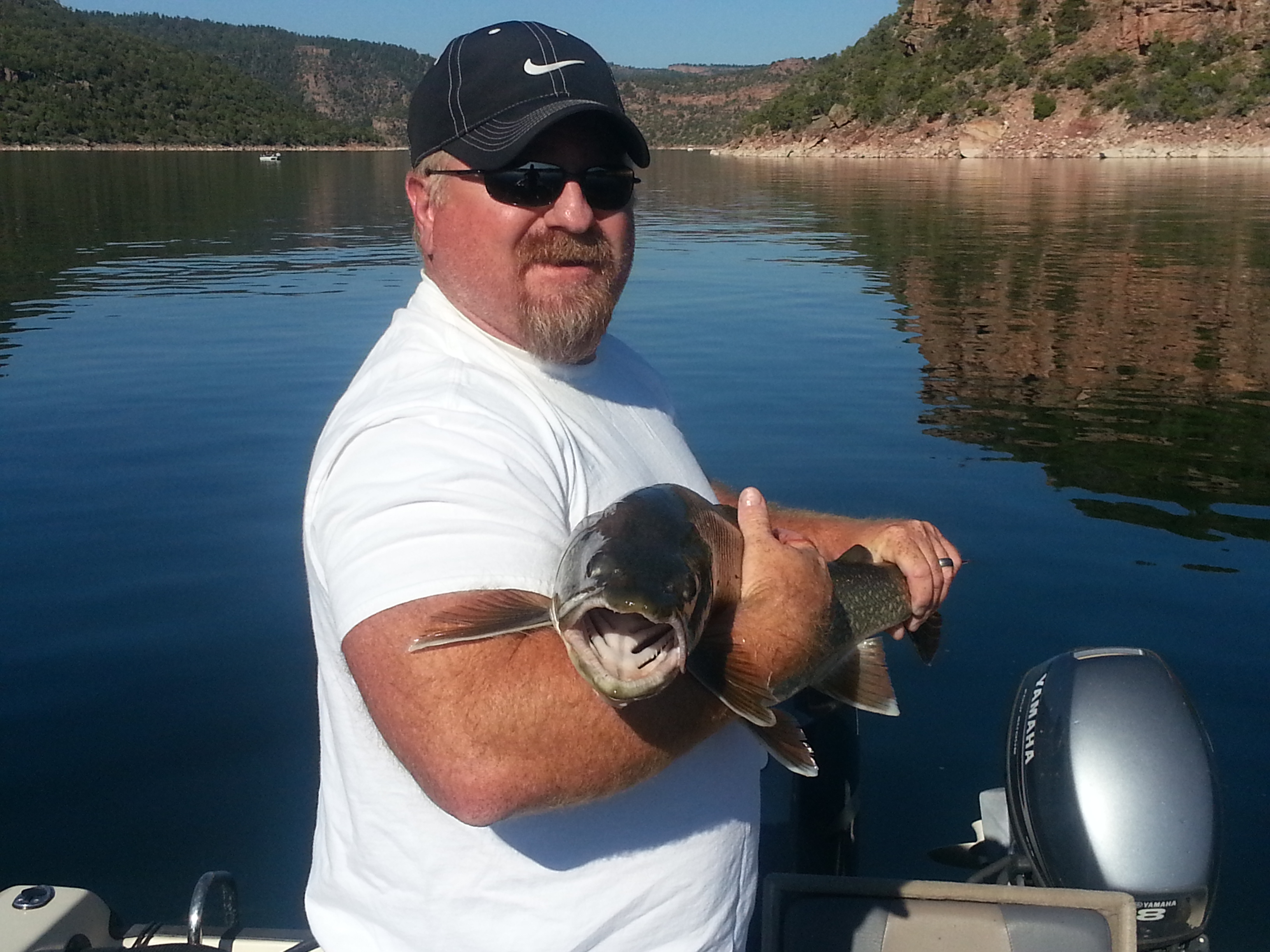 Kelly let me know when he could see his clear leader, a sign that the fish was close to the boat. I made my way to the back, still fighting my fish, and netted Kelly’s fish, with one hand! We weighed the fish in the net, I took a picture of Kelly and his 25 pound lake trout, and then went back to fighting my fish. Kelly released his fish and watched it swim away for another day. We do not keep these beautiful trophies.

My fish was putting up a real fight; however, I offered to let Kelly bring the fish in. I told him, that my fish was as good a fish as I had caught in a long time. Kelly declined saying that I had let everyone else catch fish all weekend, and it was my turn.

After a half-hour battle, with the fish coming up to 60 feet and stripping line back to the bottom several times, I finally got him coming up. You are always worrying did I tie the leader correctly; is my pole, which is bent over, going to break; however, Kelly got the net and was ready. These fish will blow bubbles as they release air from their bladder when they come up from deep water. There were bubbles everywhere. 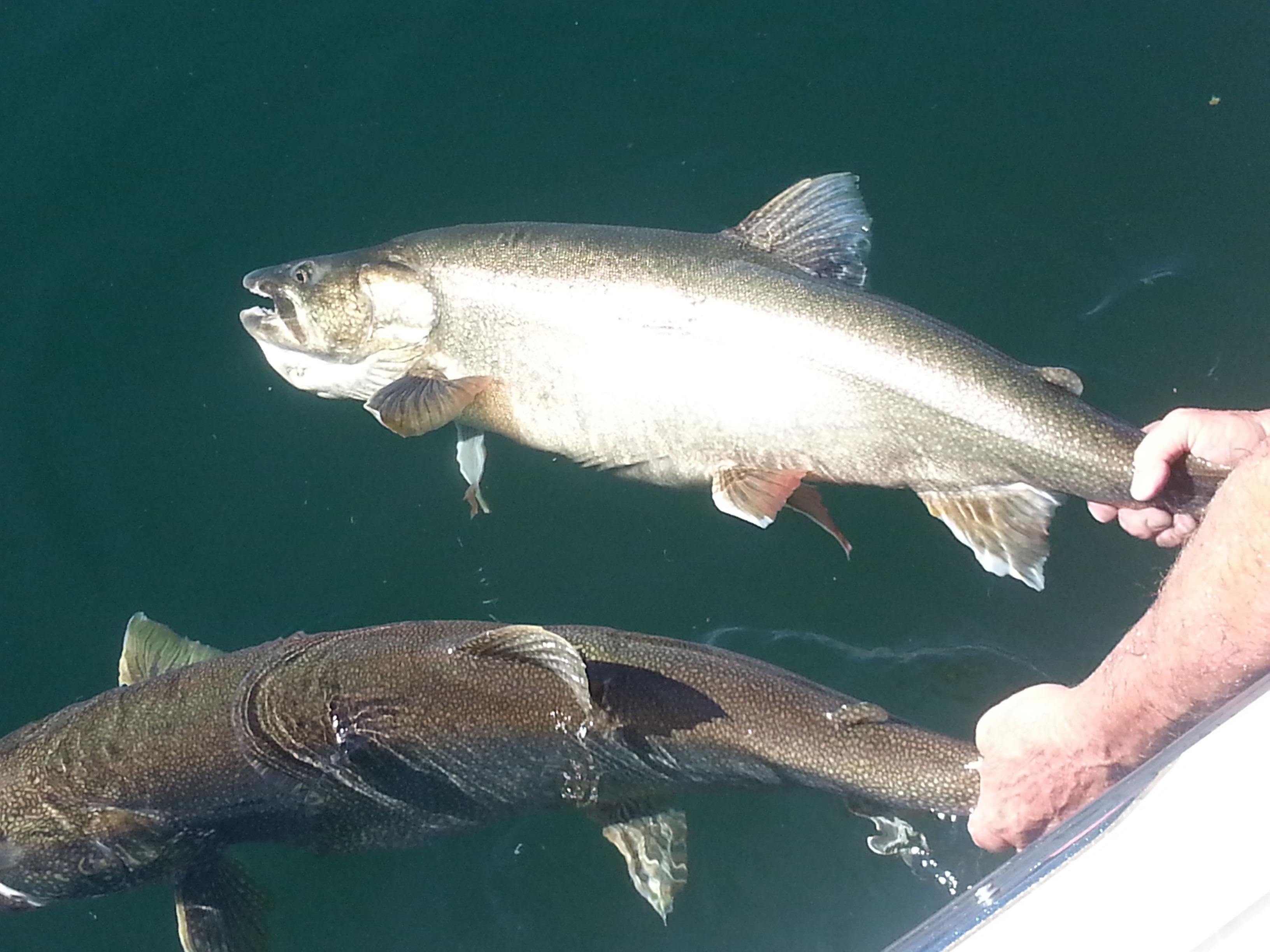 The fish started to surface near the front of the boat where I was, Kelly hollered that there was another big fish following mine. When I looked closer, I could see a fish about four feet ahead of the fish I hooked. I told Kelly, I could see the jig in the bottom fish, and I would swing the fish toward the back and for him to net the top fish which he did.

Kelly got the net under the fish and the minute, I let slack in the line that fish dropped into the net. Kelly brought that fish into the boat and I maneuvered the second fish to where he could net it. Because there were only two of us in the boat, I couldn’t get pictures of me holding both fish out of the water. We weighed them in the net one at a time. One fish was 25 pounds and the second was 23 pounds.

I had Kelly take a picture of me releasing both fish. What a day! The top fish had the line looped around his gill and the small bone on the side of his mouth, the second fish had the tube jig, 48 pounds of fish! TWO TO REMEMBER.