Since I was a young boy, I have been in love with turkey hunting. I was born on April 30th, which coincidentally, is the day before opening day of turkey season in my home state of New York. Every year for my birthday, I would ask for new turkey hunting gear and then I would stay up late getting everything laid out and ready for the following morning.

My mother, who had the task of raising 4 children on her own would always be supportive of my addiction and on many occasions, she would proclaim that someday, she would come with me to see what I get so excited about. This went on year after year as I matured from a young boy into a grown man, so in the spring of 2018 I finally decided to hold Mom to her word.

It was the evening before season opener and as I sat eating my slice of birthday cake, I asked her if she would like to come with me in the morning. As usual, she said that she would love to someday and as she tried to pawn it off on another year, I interrupted her. After some coaxing, I managed to get her to call into work the next day and go with me into the turkey woods.

Morning came early and found us sitting on the edge of a big hay field that borders a heavily-forested hillside. The sun hadn’t crested over the trees yet and as the dew rose up off the young hay sprouts, I let out the morning’s first yelps. I hadn’t even finished my third yelp when a gobble came rattling up through the woods just out of sight.

I looked at Mom and smiled as if to say, “Aren’t you glad you came?” It wasn’t long before the old long-beard came waddling up the logging road, looking for the hen that he had just heard.

It had been an early spring, and the freshly sprouted leaves were already thick, making it difficult to see. This mature old bird wasn’t stupid. When he got into sight, he decided to look around before coming any closer. Once he had surveyed the area for several seconds without seeing any hens, he turned to head the other way, so I pushed the safety off my old Remington 870, lowered the bead onto his neck and squeezed the trigger. I recovered from the shot just in time to see him launch off the side of the hill and take flight out through the thick canopy of maple leaves. He was well out of sight when I heard a very loud thud followed by an even louder crash.

Assuming that I had hit him, I jumped up and ran down over the hill in search of what I thought would be a dead turkey. When I made my way down to where the turkey had fallen, I found a spot at the base of an old oak tree where the leaves had been disturbed. There were turkey feathers everywhere but no turkey. I stood there for a minute to scratch my head and catch my breath but when I looked down I saw something strange. 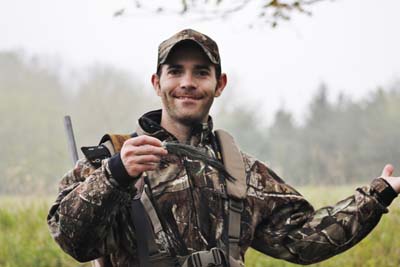 There, lying in the leaves, was a beard; perfectly intact. After several more minutes of scratching my head, I came to the conclusion that as the old bird flew down through the canopy of maple leaves, his vision was blocked and he flew straight into a giant oak limb, knocking him out of the sky and somehow breaking off his beard.

Throughout a lifetime of hunting, I have seen many strange things happen, but this one topped the list. Talk about an emotional roller coaster. When I got back to the top of the hill, I told my mom the story and showed her the beard. I’m not sure why it seemed so funny but we couldn’t help but laugh. 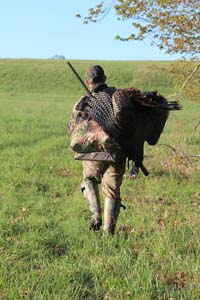 When I told her that we should now keep an eye out for a hen with 1-inch spurs, we laughed and laughed some more. Even though we had fun, I was a little let down by the whole incident, so I asked her if she wanted to come back with me again the next morning and try again. She agreed, so the next morning we came back to the exact same spot. Once again, we were out there before sunrise and just like the morning before, a gobble came echoing up from down over the hill. Twenty minutes later and here came old mister long beard. I was half-expecting this to be the same bird but when I got a glimpse of him, I could see that this gobbler was still sporting his beard. I let him strut his way right into our lap before taking the shot.

Thankfully, I didn’t miss this time and the old bird piled up.

To this day, we still talk and laugh about the old turkey who got away, how he got clothes-lined by an oak limb and lost his beard. So, if you are like me and have a mother who is willing to go out and experience a day afield with you, don’t put it off for another year. You never know, you may just make a lifelong memory with her.