Few things in the world of modern firearms can compare to the combination of power, versatility and effectiveness of a shotgun. Since the early 19th century, the scattergun’s ability to adapt to the ever modernizing world had led to applications in hunting, military, shooting sports, law enforcement and home defense. With so many applications and by definition so many different options available, trying to choose the right shotgun for your needs can be a big challenge. Take a deep breath, relax and let’s find what will work best for you.

There are essentially three different types of actions in shotguns that determine how a shotgun shell will make its way into position and be fired from the gun. The three action types and their basic descriptions are as follows:

Semi-automatic – where each shell automatically loads from the magazine tube (where all the shells are pre-loaded) with each pull of the trigger. Each subsequent pull of the trigger sends another shot downrange, as quickly as you can fire them, until your shells run out. While semi-autos tend to cost several times as much as pump actions, they also noticeably reduce the recoil you’ll feel with each shot, absorbing a great deal of it into the mechanics that load the next shell into the chamber. Semi-autos can also be a little bit more involved to disassemble and clean.

Pump Action – While manually cycling the fore end of the gun in order to chamber the next round might not be as fast as a semi-auto, pump action shotguns are much less expensive, reliable to fire even when dirty, and a breeze to take down and clean. More popular in the United States than anywhere else in the world, the pump action has become the poster child for reliability in shotgunning.

Break Actions – There are three kinds of break-action shotguns available today: single shot, one called the “over/under”, and another called “side-by-side”. Either way, shotguns with two barrels have been in vogue since the concept of the shotgun platform itself. Break actions (called so by the way the barrels separate on a pivot from the stock at the action point) can cost far less than a semi-auto or twice as much as your house depending on the make, manufacturer name and style incorporated into the design. Break actions are also considered to be the safest of all the shotgun styles, due to the obvious nature of having the action open and being unable to fire in the open state. 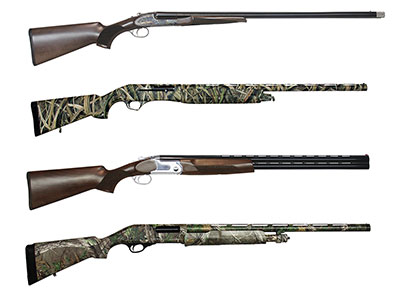 Where rifle and handgun shooters have a dizzying array of calibers to choose from, the shotgunner only has six to consider:

10 gauge – The largest gauge that you can use in the United States legally, the 10 gauge has massive recoil within an extremely heavy gun to help compensate. There aren’t many uses for 10 gauges these days (other than goose hunting), but even then, the loss of fillings with each shot is enough to turn most people off of 10 gauge options.

12 gauge – The most common and versatile of the gauge choices, the 12 packs the right size for the right job. From the light as a feather (under one ounce) field and clay loads to two-plus ounce loads that can take the head off a turkey from across a field. The 12 gauge is one of the least expensive ammunition to buy, due to the sheer volume of 12 gauge ammo manufactured.

16 gauge – A compromise between the 12 and the 20, the 16 gauge is ideal for waterfowl because it packs the necessary punch to hit the heights and bring down the birds, but is still light enough on the recoil to prevent dislocating your shoulder.

20 gauge – Recommended as the best starter or youth gun, a 20 gauge packs enough power for serious game or upland hunting as well as shooting sports competition without the recoil of the 12.

28 gauge – “The little engine who could” of the shotgun world, the 28 gauge is the lightest shot and recoil available while still being able to do what a shotgun is supposed to do. It might not be ideal for shooting clays and isn’t necessarily the best for bird hunting and is severely lacking in anything other than small game hunting, but for small or close-up shooting, the 28 proudly lifts its chin with the big boys.

A common misconception about barrel length is that the longer the barrel, the more accurate your shots will be and the better your shot patterns will group. While there is a small element of truth to this, unless you are a professional shotgun shooter, these minute differences will have no effect on your experience with the gun. Typically, a semi or pump with a 26–28 inch barrel is perfectly sized for any user. Break actions tend to have 28 inch barrels and are slightly heavier. The longer the barrel, the more compensation for recoil and the smoother the swing can be, but again, unless you are a serious skeet or trap shooter, you may find that the longer barrel is plain old annoying.

Few first-time buyers of shotguns take the stock into account when making their purchase. They will look at the action and get a feel for the trigger, grab hold of the fore end and admire the overall coolness of the gun to see if it fits what they are looking for. Most will even mount the gun (bring it up to your shoulder and face as if you were about to shoot it) and then get a feeling one way or the other. Most of the time, when something about the gun does not quite feel right, it’s because the stock isn’t working right for the shooter. An important thing to remember when mounting a shotgun for the first time (usually in the gun store) is to bring the gun to your shoulder and cheek and not to bring your cheek down to the stock. You will never get a proper fit bringing your cheek down to the stock.

Best to close your eyes completely, place the butt of the stock up and in to your shoulder and lift the whole gun up on a 45-degree angle, gently placing it against your cheek. Then open your eyes and bring the gun down into shooting position. This procedure will give you the best possible natural aim point and mounting of the firearm. If it doesn’t feel right, move on to the next one. This is especially poignant in female shooters. Women have been forced for far too long to accommodate themselves to firearms built with only men in mind.

Important features of a shotgun’s stock are:

Comb – The widest part of the stock that encompassed by your cheek and shoulder.

Drop – The distance between the top of the comb to the center point of the butt that helps determine the elevation of your eye in relation to the barrel. Too much drop will cause you to shoot low. To little drop and you’ll shoot high.

Pitch – The angle that the butt has against your shoulder when mounted. Very important because too great a pitch will cause the butt to dig into your shoulder and make the recoil feel worse than it is. Too little a pitch and the gun may slide up and down with every shot.

It is most important to make sure that the shotgun “fits you” before making a purchase. The gun could be the most intricate, detailed, masterwork piece of shootable art that you have ever laid your eyes on, but if you can’t shoot it, it’s worthless to you.

Most problems with recoil are experienced not because your shoulder can’t take the kick of the gun, but because the gun is not mounted correctly when you shoot it. In other words, the gun is wrong for you. Following the procedure above in the “stock” section will help in your selection process, but women and youth shooters also have a few more considerations. For instance, the comb of the stock should be gently touching your cheek. Smashing your face against the comb will result in a horrible bite of your cheek with every shot and a thoroughly unpleasant experience with how your body absorbs the recoil.

Another thing to consider is the pitch of the recoil pad to keep it from digging into the chest and a higher drop to accommodate a slightly longer neck that women can have over men. 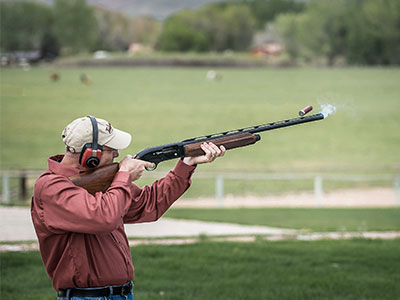 Which Shotgun Should You Buy?

For a general purpose first shotgun consider a 12ga pump with a 26-28 inch barrel length.

If you would like to get into skeet, trap or sporting clays, look for an over/under shotgun in 12 gauge.

For upland bird hunting consider a semi-automatic or over/under in either 12 or 20 gauge.

If you are just looking for home defense, consider a pump action with a 18 1/2 inch barrel in either 12 or 20 gauge. There’s nothing like the sound of racking the action on a pump to scare the hell out of a would-be intruder.

So, now you pretty much understand what to look for. You’ve got three or four models in mind that you want to look at and are headed to your local Sportsman’s Warehouse. Now what?

The most important thing to remember when buying your shotgun, is to get a hands-on experience in order to gauge how well the gun fits you. When you arrive at the gun counter, make sure you command the attention of the sales person for all your queries and be sure they know their shotguns.

It would also be beneficial to find someone who knows shotguns to perform a few small tasks during the process, like working the action. Make sure you are 100% comfortable with the controls and how everything works; loading, unloading, clearing a jam, etc. You may also want them to demonstrate taking the gun down to the level required for cleaning which can be much more helpful than watching a YouTube video.

Spend some time, do the homework, ask the questions and get in there with both hands and really make sure that the shotgun you buy will be the right one for you. As a result, you’ll have a trusted and reliable firearm for the rest of your life.

We put together some of the best gift ideas to make gift giving for the nature lover in your life easier. Whether it is hunting or fishing...we got you covered.

We put together some of the best gift ideas to make gift-giving for the nature lover in your life easier. Whether it's hunting, fishing, or camping, we have ...

If you’re trying to figure out what to get dear ol’ Dad for Father’s Day this year, and coming up stumped, then check out this list of ideas we’ve put ...