Most new and almost-new-but-relatively-unknown turkey hunting goodies displayed at the January 2017 SHOT Show are improvements to existing goodies, but let’s get radical and start with a departure from the expected norm.

Bullpups for birds?
When the AR-15 first hit markets, few opined or even imagined it would one day find a place among hunters. But today it is the “modern sporting rifle” (MSR) and we use it on everything from small varmints to big game. Will we see the same happen with shotguns? As non-traditional today as the AR-15 was in the 1970s, the Model J12 bullpup shotgun from JARD, Inc. may herald the “modern sporting shotgun” of 2067.

When we consider how far we sometimes must hike to get to our stands – and hike back out with our turkeys - the portability of a bullpup configuration is appealing. The 12ga J12 is a bit hefty at 8 ¼ pounds, but is less than 27” overall; the 18 1/8” barrel accepts Remington choke tubes and is chambered for 3” shot shells fed from Saiga magazines. The metal chassis is a clam shell break-open design, sporting a dark earth color; other visible parts are all matte black. Inside is a gas operating system with uberstrong rotating bolt locking and rod bolt guidance smoothing its cycling and the maker says the trigger is “exceptional.” A top Picatinney rail mounts optics or sights of your own choice. 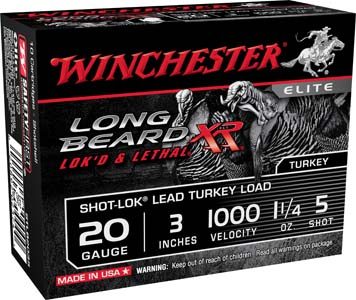 Tight for turkey
It appears makers are moving away from mixing shot of different sizes within the same shot shell for turkeys, which is really a kind of hope-based practice of “if the left one don’t get you then the right one will.” Since we’re talking Winchester Long Beard, the trend to get extended ranges and tighter patterns for turkey hunters led Winchester Ammunition to develop Shot-Lok shot buffering, now incorporated in a new 20ga Long Beard XR offering. In the Long Beard XR 20ga ammo Winchester injects a liquid resin into the lead #5 or #6 shot in the hull; the resin hardens to protect the shot and upon firing shatters into near-dust. There’s less pellet deformation, aiding the 3-inch 20ga shot shell to gain extra yardage on-target.

With the SXP Turkey it appears we’re essentially getting Winchester’s Long Beard shotgun sans vertical pistol grip and Extra-Full Turkey extended choke tube, but the Turkey model offers an optional 20ga version. The Turkey is also about a pound lighter than the Long Beard.

The Black Eagle’s heart is its Inertia Driven gas system that never needs adjustment, whether using stout 3 ½” magnum turkey rounds or 1 1/8oz, 3-dram dove loads. The 26- or 28-inch barrel comes with five choke tubes, two extended and three flush-mount and is topped with a single red fiber optic bead at the muzzle.

All the basic controls – trigger, safety, bolt release – are clustered within reach of the index finger, the ergonomic radius of the grip an aid in reaching them. In fact, much of the SBE 3 is about ergonomics. You can adjust length of pull (got youths?) with interchangeable butt pads, as well as ‘cast & drop’ with included shims. The forearm is remarkably slim, especially for a gas gun. We’re usually wearing gloves when turkey chasing, so Benelli designed the SBE 3 with an easy-twist 3-sided mag cap, enlarged bolt handle and release and a beveled loading port with two-piece carrier latch that helps avoid snagging gloved thumbs.

Comforts include a claimed 48 percent reduction in recoil thanks to those Comfort Tech 3 “gill slits” in the buttstock and reduced shock and vibration to the shooter’s face from the Combtech cheek rest. Combined with the adjustable LOP, these features alone make the SBE 3 a great choice for a youth or ladies’ semi-auto 12 gauge to fill multiple roles. 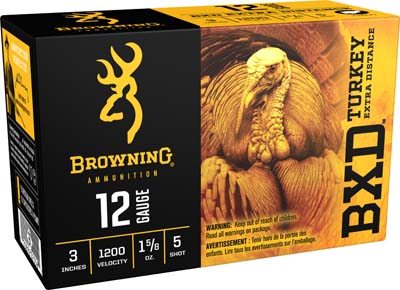 Browning BXD Turkey
Browning also has designed a shot shell specifically for turkey, the BXD Turkey. The BXD works on the idea of preventing shot deformation to tighten patterns, doing so with nickel plated pellets and powdered shot buffering. The plastic wad differs from most others in being somewhat aerodynamic, which aids in tightening patterns by keeping the shot bunched up together longer before the rear end of the wad creates enough drag to fall away from the pellets. 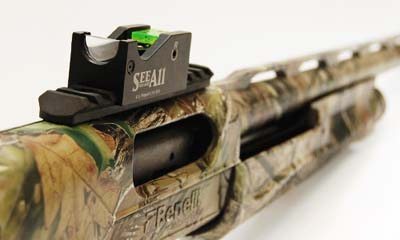 See ‘em
One of the first surprises a new turkey hunter discovers is that shooting conditions in the shady haunts of big birds (especially in the Southeast) are often too dark for simple shotgun beads or iron sights. Some hunters have moved toward red dot sights, but anything with microcircuits invites Murphy to spoil a hunt at squeeze time.

The Oversight Shooting Technologies See All Nite battery-less tritium/optical/open sight mounts directly to a shotgun Picatinney or Weaver rail. The small, low profile, open unit has nothing on top to interfere with vision. It works by essentially using a tiny tritium panel to “project” the image of a black triangle (or the bottom half of a standard crosshair) onto a magnifying piece of curved glass. What you see is the black triangle against the bright green background; there is no parallax so you simply hold the point of the triangle on your target. Acquisition is fast enough for snap shooting and during the off season you can mount the See All Nite sight to any other rifle or pistol that has an upper rail. 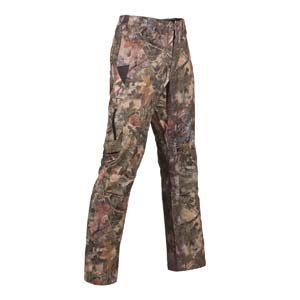 Camo King
Temperatures can fluctuate widely during spring and fall turkey hunts, so layering is the name of the game. King’s Camo XKG is specifically designed for up to five layers of lightweight, packable clothing in patterns appropriate to mountain, field, woodland and desert hunting (“Desert turkeys?” You didn’t know about turkey hunting in the Southwest?). Foundation base layers are thin, breathable, wicking, no-itch, odor control Merino wool; mid layers stretch with movement and outer layers are waterproof and windproof, yet breathable. Shirt and jacket backs have extended lengths, so they don’t ride up while sitting in the blind. Each article of clothing has more features specific to its use, too many to cover here, but consider just the XKG Ridge Pant: four-way stretch, articulated knee, diamond crotch, water resistant, snap-close cargo pocket and waist sizes start at 30”. 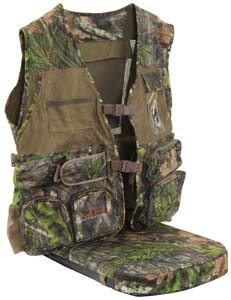 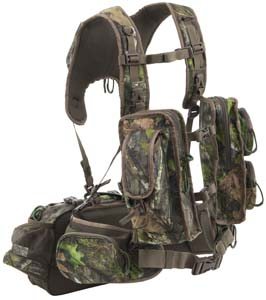 Picking pockets
Remember when your GPA in college was 4.0? Me either, but 4.0 is a good thing, which is probably why ALPS OutdoorZ calls its new turkey hunting backpack the Super Elite 4.0. They might have called it the “22” to number its plethora of pockets, some of them specifically designed for slate calls, box calls, diaphragm calls and phone calls – the latter a cell phone pocket on the chest. I’m not sure if they consider the blood-proof, breathable, hen-ish size game bag a pocket. The fold-away comfy seat cushion detaches with quick release buckles; it has no pockets. Both the M/L and XL/XXL chest sizes weigh in at three pounds.

If that’s too much of a good thing, the Long Spur Versatile Turkey Hunting Vest System may appeal to your minimalist nature. The pittance of pockets compared to the 4.0 will still hold a box call, two slate calls, a locator call and mouth calls in two thoughtful mesh pockets that permit the spit to dry out. There’s also a shoulder strap mounted hard plastic box to hold three diaphragm calls and loops for non-rattle carry of five shot shells. Pattern for both ALPS’ is the new darling, Mossy Oak Obsession.

Gnarly Flutes
Don’t want pockets? While no call can do it all, the Turkey Flute from Haydell’s Game Calls can do yelps, gobbles, cutts and clucks – or more correctly, YOU can do them after learning from the instructional DVD. And all you need is a shirt pocket. 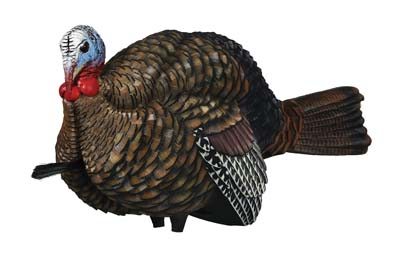 Packable Decoy
Avian-X Lifesize Collapsible Decoys are similarly realistic, but are a bit more portable if you don’t want to hump a bulging ruck full of decoys along with all your other stuff. 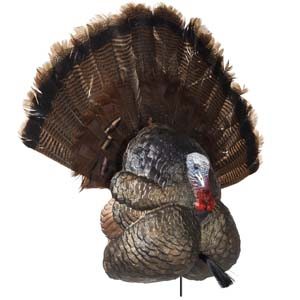 Fakin’ it
Flextone’s very lifelike Thunder Series of decoys are lightweight, flexible, durable and affordable. Together, they make a convincing flock in a variety of natural poses like Feeding Hen and Creeper. 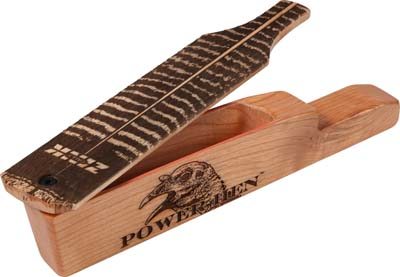 Power Hen
You know it’s tough, trying to describe a turkey call’s sound. But, Zink Calls gives it an intriguing shot in describing its new Power Hen hybrid cherry & maple box call as producing, “a desirable high-pitched front end that grabs a gobbler’s attention, with a gradual slide into the gnarly backside rasp that drives him crazy.” Gnarly backside rasp? I wish I had written that!