If you are the type of hunter that likes a lot of opportunities and a plenty of days to hunt, look no further than waterfowl season. Getting into waterfowl hunting may be easier than you think, in fact, you may already have many of the items needed. Like many other forms of hunting, there are piles of specialized gear that can help but are not necessary. Here are some of the most important items you’ll need to successfully hunt ducks and geese this fall and winter.

The most essential piece of equipment for waterfowl hunting is a shotgun. It helps to have a modern gun that is chambered for at least 3” shells, with many goose hunters liking the option of being able to shoot 3.5” ammo. Another important feature of a shotgun is the ability to change out the chokes, which controls your shot pattern down range and can make a big difference on the number of birds you down.

Many waterfowlers get started in the sport with a simple, yet effective pump shotgun. They are easily cleaned in the field and ultra reliable in the harsh conditions you can encounter during a waterfowl season. Semi-automatics are nice for a number of reasons; they lessen the often, heavy recoil dealt from hard hitting waterfowl loads. They also tend to make a second and third follow-up shot a little easier, as you can stay on your target a little better. Sportsman’s Warehouse carries an incredible selection of quality guns. With my ties to Browning and Winchester, I may be called a little partial, but the Winchester SXP (MSRP $499) and the Browning Maxus (MSRP $1,739) are two of my favorite waterfowl choices, with both available in camo patterns as well as synthetic and wood grain stocks. 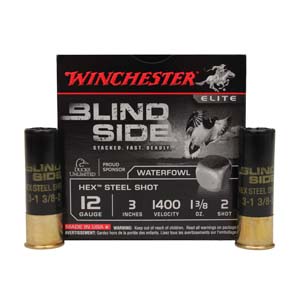 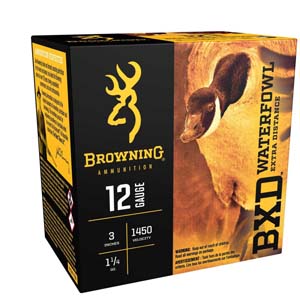 The options in ammunition are nearly limitless and widely available. Steel shot is the norm, though there are numerous other lead-free shells available for those that are looking for a premium load. Start by buying a few different brands to pattern, much like sighting in a big game rifle. Figure out what works best with your gun, then stick with that load for the season. There’s been a recent trend in waterfowl ammunition to come up with specialized loads, some with “cutting” rings around the pellets, others in the shape of cubes, with the reasoning being that it causes larger trauma to the bird. Other innovations in recent times have been with the wad, the part that holds all the pellets together in the shell and follows it down the barrel of the gun. The idea being, you’ll have a better pattern and more pellets on the target down range, be it a duck, goose, or paper bullseye.

As was said earlier, take the time before the season kicks off to pattern your gun and you’ll have the confidence when you take to the field. Speed is the new name of the game and will dictate the pricing. Prices range from $10 to nearly $50 per 25-round box. Again, Winchester and Browning both offer great waterfowl loads, with both well stocked on the shelves at your local Sportsman’s Warehouse. 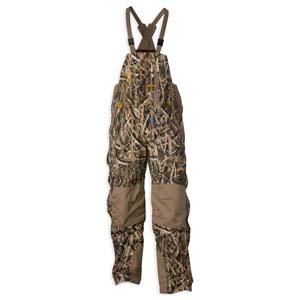 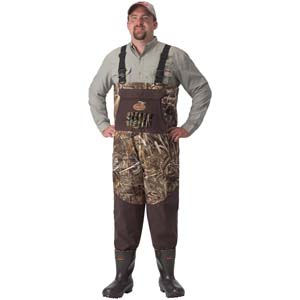 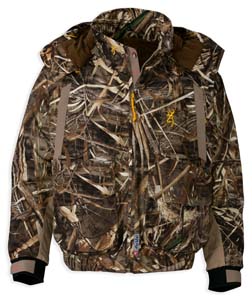 Clothing is another important part of waterfowl hunting. Like many other outdoor pursuits, the weather fluctuates wildly and does have a large impact on the hunt. Unlike other hobbies, the vast majority of waterfowl hunting deals with water - go figure. Depending on the style of hunting, plan on spending a bit of time in the water, with waders on in many cases. Layering is key, as you want to have the flexibility to adapt to temperature changes as they come and also be able to protect yourself when the skies open up. Plan on a good base, mid and outer layer, as some of the best shoots are had when the clouds are low and the snow or rain is coming in sideways. Browning’s Wicked Wing line has taken their classic Pre-Vent fabric, PrimaLoft Synergy insulation and combined it with highly functional tailoring to produce a feature-rich selection of parkas, jackets, bibs and pants, along with base and insulation layers. Expect to pay top dollar for good camo, about $300 per set of bibs and also for the jacket.

Next, you’ll probably want a good pair of waders that will not only keep you dry, the obvious reason for having them, but also will be versatile enough to work with the changes in the weather. Typical waterfowl season starts early fall and can run late into January. Most parts of the country will see drastic swings in the temperatures during that time. There are two main types of waders, the first being neoprene, which excel in durability and keeping you warm when the temps dip down, but they tend to be a bit tougher to walk in and can freeze up in real cold temps. The second option are breathable waders; think fishing waders with boots and camo added. The wader decision all boils down to how much you want to spend, what kind of temps you think you might encounter and perhaps most importantly, how hard you typically are on gear. Expect to pay somewhere in the neighborhood of $150 to $400 for a good pair. Waterfowl Wading Systems, LaCrosse and Drake all offer great choices.

To fool smart or wary birds, you’ve got to outthink them. A large part of doing that is spending time scouting, much like preparing for a big game hunt. A big part of fooling those birds once you’ve figured out where they want to be is decoys and calls. Decoys vary from two-dimensional cutouts to high-end molded plastic that have been hand painted and flocked for something so realistic that many hunters fool themselves. Get what you can afford, as with many things in life, you get what you 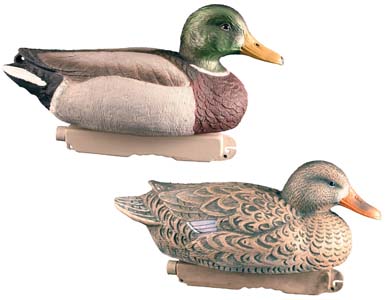 pay for and a good dozen decoys will make a world of difference. Spend time watching the birds while scouting to see where they are positioned in a field, replicate that as close as you can, leaving a gap in the “spread”, such as an “X-pattern” in front of you for the newcomers to land in. Avian X and Final Approach both have a wide array of great duck and goose decoys. Duck decoys start at about $60 a dozen and goose decoys about $200 per half-dozen. 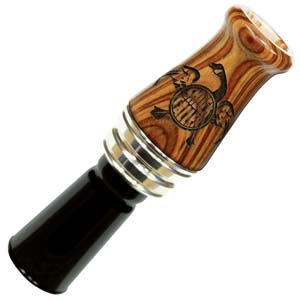 Calls are an important part of fooling the birds, making them think there are birds already on the ground or in the water. There’s a fine line on using calls, as bad or poor timed calls can easily show your hand and flare the birds away from where you’ve set up. Spend time learning effective calling from others or watching the many videos that have been produced. Many great calls are available from Primos, Faulks, Rich N Tone and Zink, starting at around $20. You will find that you may need an assortment to cover all of your species needs. And remember, practice makes perfect!

If water fowling is something new to you or something you are looking to get into, I’d suggest hiring a guide. Nothing shorts the steep learning curve better than going out with someone that knows the ropes. Even if you’ve hunted birds for years and are looking to take it to the next level, a good guide can help you improve that skill set. Look for someone in your area that has been guiding for years and knows how the birds work the local area. You’d be amazed at the things you can learn from someone that chases waterfowl full time. Stillwater Outfitters in Colorado are one of the best in the business and have been an endorsed outfitter at the Sportsman’s News for many years. Like a moth to a porch light or fisherman to Alaska, there is an indescribable attraction for hunting ducks and geese in Canada. If you are really into waterfowl and want to experience something truly amazing, set your sights on taking a trip up north. The styles and seasons are similar to ours in the lower 48, but with an unreal difference in the number of birds in the sky. Give Ranchland Outfitters in Alberta, a long-standing Platinum Approved Outfitter with the Sportsman’s News, consideration when you start thinking about heading north. Their crew will put together a hunt for you that will leave you wanting to return back again and again.