The Blind Without a Blind Spot

Double Bull has been the premier brand in hunting blinds for many years. What started as a small Minnesota company founded by two hunting buddies, grew to be the most trusted name and the originator of the pop-up-style, five-hub ground blind.

Ever since that original product, Double Bull has continued to introduce advances, such as the double-wide door, 180-degree window, silent slide buckles, and many other innovations. And throughout that history, Double Bull has been revered as having the highest quality and longevity.

In 2018, Double Bull is again turning the hunting blind industry on its head.

A New Innovation
Always looking for the next advancement, Double Bull engineers are first and foremost hunters. They are constantly on the lookout for innovation that provides true value to the user. A little over two years ago, Double Bull began experimenting with a new fabric technology. This exclusive fabric has unique properties that allow it to function like a two-way mirror—hiding the hunter from the game outside the blind, but offering a full view without gaping windows.

The basis of the technology, now dubbed SurroundView, is a special tiny pinhole pattern. When printed with a camouflage design, the holes are hidden and appear solid. Yet, when colored in solid black, they allow a near-transparent view.

“It’s a sort of optical illusion,” explained Jason Harris, Senior Product Manager for Double Bull. “From the outside, the camouflage pattern tricks the eye, human or animal, into thinking it’s completely solid. The inverse is when you’re on the inside, your eyes are able to focus through the pinholes and your mind disregards the blank black fabric between the holes.”

The benefits to hunters are pretty obvious: No more silent gobblers sneaking in the back door. No wary bucks skirting the setup just out of view of a window.

Hunting Without a Blind Spot
Anyone who has hunted in a pop-up blind, or even a shooting house, can understand the limitations to a reliance on windows. It seems you are always trying to see what you can’t see, because narrow shooting portals, or windows, only provide a limited point of view. With SurroundView, there are no surprises. You can see when a deer is coming from the far corner of the field. You can see if it was a squirrel making noises… or a raccoon… or a deer. It gives you ample opportunity to prepare yourself if an animal is approaching in what would traditionally be a blind spot. It gives you the ability to anticipate and be prepared for when it’s time to take the shot.

“It is a huge benefit to be able to see your entire surroundings, know what’s about to happen, and also prepare for it,” Harris said. “Also, if you’re sitting with kids, or someone who’s new to the sport, they can just sit still and see everything. That’s a big difference from what I’ve seen happen a lot in other kinds of blinds. The kids are having to hunch over, move back and forth, and look through each window to really see what’s going on around them. With SurroundView technology, you can sit comfortably and survey all around without much movement, yet you’re totally hidden.”

Three Versions of the Ultimate Hide
SurroundView blinds incorporate other Double Bull innovations that hunters have come to love. First and foremost, the SurroundView technology uses Primos Truth Camo, which is a proprietary camo pattern that was created specifically for large-format applications, such as blinds. There are plenty of camouflage patterns on the market that perform well in a tree, or in certain conditions, but Truth camo was developed specifically for the ground-level, no matter the conditions or environment. It works spring or fall, in green cover or brown, and breaks up large objects such as blinds exceedingly well. 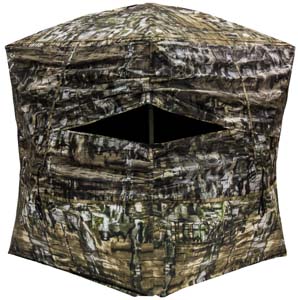 SurroundView fabric does cost more to produce, and in many applications, hunters will not need a full 360-degree viewing experience. But for those that do, the SurroundView 360 offers a 77-inch hub-to-hub dimension, with a 60-inch floor space and 70-inch height. It’s great for two full-grown hunters, or an adult and a couple of kids. It incorporates the 180-degree shoot-through window configuration that is on the current Double Bull Deluxe Blind. It also comes with a blackout curtain that can be positioned on any of the four wall panels. 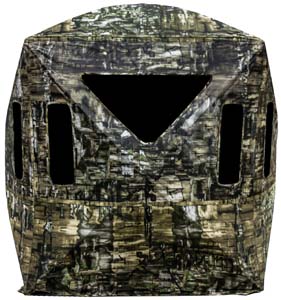 The next size is the SurroundView 270. It incorporates one black-out wall with three SurroundView walls, and features more traditional port-style shooting windows. It is 73 inches hub-to-hub and has a floor that is 55 inches. The windows are vertical to allow hunters to use bow or rifle, plus larger, horizontal shooting windows are located above the rod and hub systems. 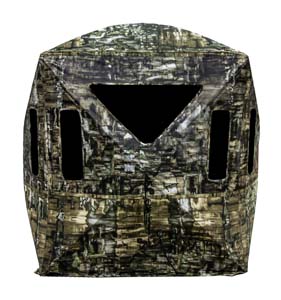 The SurroundView 180 is the smallest of the three. It has the same window configuration as the SurroundView 270, but is 64 inches hub-to-hub, with a 48-inch floor space, and a 65-inch height. It’s perfect for the solo hunter. It incorporates two SurroundView see-through panels, giving you a 180-degree field of view.

The NextGen Component
Primos, who owns Double Bull, is getting behind the SurroundView blind fully with a strong marketing campaign. One component is a smartphone app that will allow users to test drive the SurroundView models. Using Augmented Reality software like that found in Pokemon Go and other next-generation apps, the SurroundView app will let the user “place” a blind in a location via their smartphone’s camera. They can then “step inside” the blind to see if the placement is right before ever setting up a blind.

“It’s going be useful for determining blind setups in the field,” Harris said. “But I think it’s also going to really showcase at the store level the kind of experience these blinds can provide.”

The new SurroundView blinds will have MSRPs of $499, $399 and $299 for the 360-degree model down to the SurroundView 180. To find out more visit www.primos.com. The Primos team will be using the blinds on the top-rated Truth About Hunting TV show and product information videos will be posted to YouTube at Primos’ Stream the Language channel: https://www.youtube.com/user/PrimosHuntingVideo. 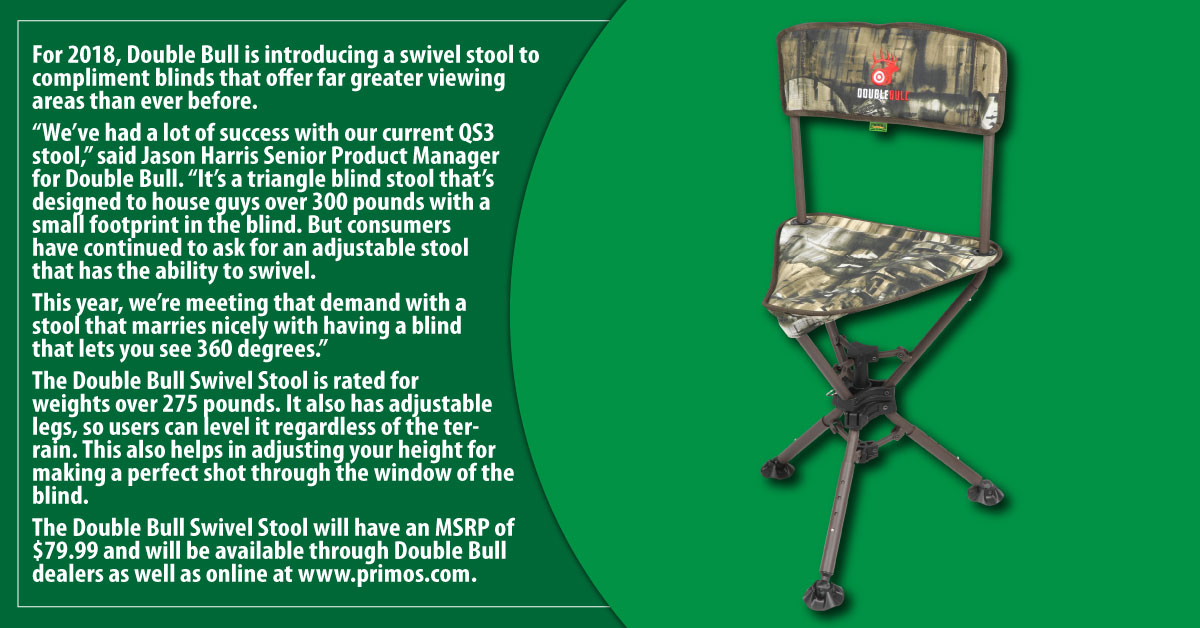