Deadly At Any Distance

Choosing hunting ammunition has traditionally involved selecting a round that would yield maximum performance at the range you expected to shoot. Some rounds were lethal up close, while others were designed for long-range accuracy and lethality. Finding a load capable of dropping game equally well at all distances has largely been a dream—until now. 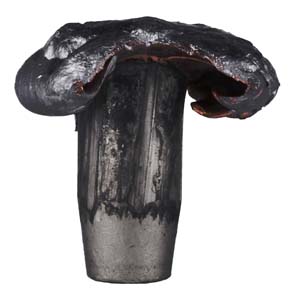 Terminal Long Range
Deadly terminal performance is a result of the bullet’s ability to penetrate straight through its target and unleash a knockout punch of energy along the way. This requires the front of the bullet to expand uniformly when it hits the target, which increases stability. And that’s where many so-called long-range bullets have traditionally fallen short. These projectiles can fail to expand at all, or they expand asymmetrically, causing the bullet to veer off course or tumble—even exiting out the side of the target.

Federal Premium engineered the Edge TLR for flawless expansion at a wide range of velocities, from blistering speeds at the muzzle all the way out to extreme ranges where velocity falls off. At all distances within this vast window, the round reliably expands within the first couple inches of entering the target and punches straight through, dumping devastating amounts of energy in the process. This instantly destroys tissue, blows through bone and causes quick, humane kills on some of the toughest big game. A carefully designed nose paired with a completely new polymer tip helps make this possible. 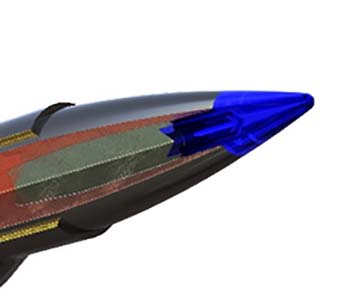 “The Slipstream Tip features our patent-pending hollow-core technology,” said Product Development Engineer Justin Carbone. “A small cavity runs the length of the shank all the way up to just below the point itself. That point breaks free upon impact, allowing fluid to enter the hollow core, where it generates pressure and easy expansion at low velocities. Even during our initial tests of preliminary designs, it worked perfectly and instantly extended the bullet’s effective range a few hundred yards.”

A large hollow cavity in the bullet nose along with exterior jacket skiving further aid expansion and penetration. Serrations allow petals to peel back on contact at velocities as low as 1,350 fps—speeds typically seen 1,200 yards downrange in the 200-grain 30-caliber loads.

The Slipstream Tip’s hollow core sets it apart from all other polymer tips on the market—but it’s also unique in its resistance to the elevated temperatures a bullet experiences during flight. This high-tech blue material is actually the same one Federal Premium has used for a decade in the popular Trophy Bonded Tip bullet. It has a glass transition temperature—or softening point—of 434 degrees Fahrenheit. This unmatched heat resistance gives shooters the extremely consistent ballistics needed to make accurate long-range shots. 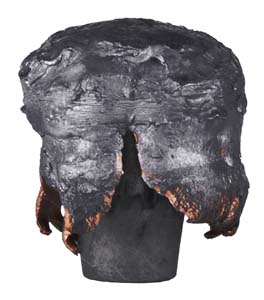 Close-Quarters Coverage
With the growing popularity of long-range big game hunting, it’s not hard to find ammunition claimed to offer the accuracy and downrange terminal performance to do the job. However, to even come close to filling this tall order, these options are often built like varmint bullets, with light, thin jackets to encourage expansion at the low velocities experienced at longer ranges.

Unfortunately, when the bull or buck of a lifetime steps out of the brush 20 yards from the hunter, such single-purpose projectiles can completely blow apart under the high velocities of close-range impact. The result is shallow penetration, low weight retention and poor terminal performance.

Edge TLR doesn’t make such sacrifices, combining its extreme range expansion capabilities and accuracy with the bonding and heavy-duty construction of the world’s toughest hunting bullets.

“You still get that bone-crushing bonded-core technology that’s been proven for decades in our Trophy Bonded Bear Claw and more recently in the Trophy Bonded Tip,” Carbone said. “The bullet’s copper shank and bonded lead core retain weight for deep, reliable penetration—even at high velocities. There’s no other bullet with this wide of a velocity spectrum, period.”

Boosting BC
Edge TLR doesn’t just pack a punch. The new round is also incredibly sleek, allowing long-range surgical strikes that have historically been limited to handloaded match bullets.

The credit goes to its extremely high ballistic coefficient (BC), which is a measurement of how well the bullet cuts through the air on its way downrange.

“Another way to think of BC is as a measurement of how well the bullet maintains its velocity,” Carbone said. “The more velocity it retains, the flatter it flies, the less wind pushes it and the more energy it holds onto for expansion on impact.”

To boost BC into the stratosphere, Federal Premium engineers gave the Edge TLR several important design features, including the small-diameter Slipstream polymer tip and a secant ogive.

A sleek, elongated boat-tail profile is another critical part of the performance package, and like the rest of the bullet’s design, it didn’t happen by accident. Longer boat-tails yield higher BCs. The tradeoff is lengthy tails can reduce stability. To conquer this, Federal Premium engineers determined the optimal boat-tail angle and extended the length as far as possible without taking a bite out of bullet stability.

To further boost BC, engineers selected bullet weights that are as heavy for caliber as possible while still maintaining stability through the different barrel twist rates common in today’s wide array of hunting rifles.

As a result, Edge TLR boasts some of the highest BCs in the industry. Doppler radar was used to verify that the 175-grain 30 caliber has a BC of 0.536, while the 200-grain version hits 0.625. Those are big numbers for these bullet weights in anyone’s book—and they’re achieved without compromising stability.

“You get the flattest trajectories, the least amount of wind drift, and the highest confidence that you’re going to make your shot,” Carbone said.

Get In the Groove
Like many of the most versatile hunting bullets, Edge TLR also features grooving along the shank to improve accuracy across a range of rifles, while decreasing barrel wear and fouling. However, unlike conventional grooving, the AccuChannel technology used in Edge TLR accomplishes these goals with only a minimal increase in drag.

Standard grooving causes approximately a 5 percent drop in BC per groove, so Federal Premium engineers ran a series of tests on both the number and location of grooves to determine the best combination for accuracy and minimizing drag.

“That’s when we made a breakthrough,” Carbone said. “We learned that by strategically placing one groove we could achieve the same benefits and accuracy as multiple grooves.”

Still not satisfied, the engineers used fluid dynamics modeling to tweak the groove geometry itself to reduce drag even more. “Your typical groove has steep, 90-degree walls,” Carbone said. “We gave AccuChannel grooving a sloped rear wall that lets air flow more easily in and out of the groove, decreases pressure on that portion of the bullet and minimizes overall drag.”

The benefits go far beyond just drag management. “With such a wide variety of hunting rifles in circulation, some will invariably not shoot as well with certain bullet designs,” Carbone said. “But with Edge TLR’s AccuChannel technology, you get the best possible accuracy across the widest range of rifles.” 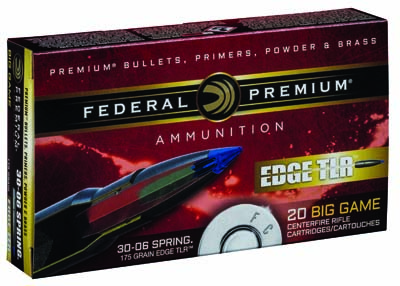 The Only One
In a marketplace filled with competitor loads that make tradeoffs—sacrificing short-range terminal performance for long-range expansion, or toughness for accuracy—Edge TLR stands alone. Designed from the ground up to meet every aspect of all-range performance, it removes all doubt.

The black-nickel finish on both the bullet and case delivers corrosion resistance as well as a sleek look that appeals to serious shooters. Like all Federal Premium rifle ammunition, Edge TLR is loaded with Gold Medal match primers and specially formulated propellant, and it is held to extremely tight quality control specifications for velocity, pressure and accuracy.