In every field of human endeavor there is a select group of individuals who are given credit for making such major contributions that they become synonymous with their achievements. In the area of firearms development, one name that must be included on that honored roster is Benjamin Tyler Henry. His invention: the Henry Rifle.

It was Mr. Henry who conceived the first practical, lever-action repeating rifle. Patented in 1860, the Henry gave a single man the firepower of a dozen marksmen armed with muzzle-loading muskets.

With its reliable .44 caliber rimfire metallic cartridge, the original Henry produced a rapid and highly accurate fire. The Henry rifle would go on to play a significant, if not dominant role in the frontier days of the American West. It would soon become one of the most legendary, respected, and sought-after rifles in the history of firearms.

The modern-day Henry Repeating Arms company was started by Louis Imperato and his son, Anthony in Brooklyn, New York in 1996. The first model produced was the Henry H001 Classic Lever Action .22 and the first shipments were made in March, 1997. The original corporate motto was “Made in America and Priced Right”.

Henry produces, hands down, some of the best-looking lever action rifles on the market in brass and silver models, but as a part of their aggressive expansion into the more utilitarian side of life with newer steel centerfires meant for everyday life in the truck, on the farm, and through the woods, in 2016 they introduced the hard-working, All-Weather H010AW in .45-70.

The All-Weather .45-70 is essentially the same as its blued steel counterparts, complete with an 18.43” round barrel, 4-shot magazine, and adjustable buckhorn/bead sights. Like the blued rifles, the All-Weathers also wear the same pistol-grip profile. The major differences lie in the hard chrome plating on all metal surfaces (except springs and sights) and a durable industrial-grade coating on hardwood furniture.

In a tough world where a working rifle might be “rode hard and put away wet”, this is the finish you want on it. A very strong plating permanently bonded to the steel underneath; hard chrome doesn’t flake, chip, or peel and its corrosion resistance is actually stronger than some stainless steels. The treatment they use increases surface hardness, reduces friction on moving parts, doesn’t normally scuff or scratch, and leaves a low gloss look that won’t spook game.

The furniture is another departure for Henry on the All-Weather; they’ve based a good part of their reputation on their select American walnut over the years, but here they have opted for a stained hardwood with a carefully-selected coating that’s formulated to stand up to wear, tear, scratches, moisture, temperature variations, and the angst of the various “character marks” an everyday outdoor tool inevitably picks up during its lifetime.

Henry Repeating Arms has been manufacturing .45-70 lever action rifles since 2012, but with the situation of inclement weather raising its rusty head, damaging a great field rifle continues to be an industry concern. Perhaps you are in a scenario that allows after a day of hunting, to hike back to a hard-sided cabin to a hot meal and a dry place to service your rifle. However, as you know, there are many hunting locations where you are lucky to have a cold, wet tent to return to at day’s end. With limited space or opportunity to clean and oil your firearms on a remote hunting trip, sometimes the rifle gets neglected. 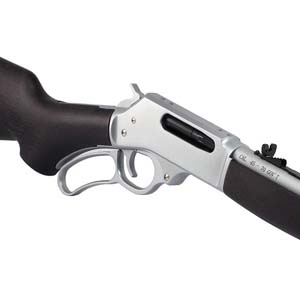 The old saying is, “the only two enemies a firearm has are politicians and rust!"

We found the action pretty slick out of the box and got smoother the more it was cycled. This is not as smooth as a tricked-out Cowboy Action lever gun, but this gun isn’t meant for competition. This is a working gun—a gun that wants to ride around in the truck or in a handlebar rack on an ATV. Like a good dog, this gun needs to work.

Henry All-Weather rifles come set up with the classic lever gun sights—semi-buckhorn rear with a brass front bead. If you want to add an optic, Henry has you covered. The top of the receiver is drilled and tapped to take a Weaver 63B mount. 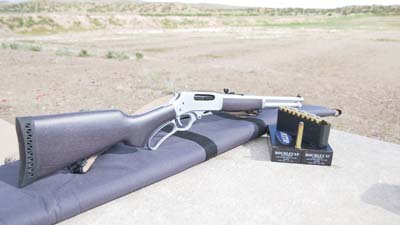 The .45-70 is a big, hard-hitting round. With the right load and within reasonable distance, there isn’t anything in North America you couldn’t take with this round. 300 grains moving at close to 2,100 feet per second hits hard, and with the Henry you have five of them that can be fired in seconds. We used DoubleTap jacketed soft points in our range test. By our fifth round, straight out of the box, we were hitting center target at 100 yards.

Made in the USA. Henry isn’t going to have to remind you they make their guns in the States because it has been a core part of the company’s identity. If you want a newly manufactured American-made lever-action rifle, then a Henry rifle is the gun for you.

Reliability in firearms is a must. The lever gun is capable under ridiculous conditions. As long as you are still functioning, it will too. The Old West is still alive today – and the Henry rifle is definitely proof of that. Check one out the next time you visit your local Sportsman’s Warehouse gun counter.