Trail cameras are a great asset for scouting animals as well as hunting when your state allows. It’s like having a dedicated hunting buddy who will sit in the woods for you twenty-four hours a day, seven days a week and tell you exactly what he saw. We, at the Sportsman’s News, have over twenty years of personal experience with trail cameras and in that time, they have definitely changed. They have gotten to where they take better pictures as well as video. Most have shorter trigger speeds and will activate at longer distances. However, many of these things are considered to some to be very complicated in the setup process.

The Primos Proof Camera 02 has combined the best of the new technology, while simplifying the basics of setup and selections for those individuals who are electronically challenged. This provides an individual with the ability to get high quality photos, video or time lapse in a compact trail camera and the ease of operation by just flipping a few toggle switches on a well-marked panel. This is truly the simplest camera we have ever setup, with high quality to match.

The camera itself is small and compact, measuring just 4” wide, 5” high and 2.5” deep. It operates off of 8-AA batteries and will accommodate SD cards up to 32GB. 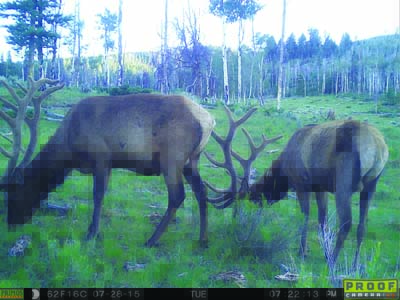 A 32GB card will capture and store over 26,000 images taken in the highest resolution from the 12-megapixel camera. If you are just looking for standard definition photos which will output at approximately 400kb, the same card will store a whopping 80,000 photos. When you are looking to use your trail camera to capture video, you can choose either high definition or standard to take up less memory. You can expect to capture 2,400, 15-second high def videos on that same 32GB card. If you are using your camera to capture wide open spaces, under time lapse photography, taking one photo a minute, you can gather photos for almost five months.

Whether you are looking for photos, video or time lapse, this camera does it all. Each of these selections are executed with three simple switches (mode, settings, and delay) instead of complicated push button menus. The first switch allows you to choose if you would like photos, video or time lapse. The next switch selects the number of photos to take, time of video recording or amount of time you want between photos taken for time lapse mode. The last switch allows you to choose the delay between photos/video.

The setup for the clock and date is the only digital and push button thing on the unit. Once setup, you are good to go for the season. Each picture captured will display the time, date, day of the week, moon phase and temperature.

Primos’ Proof comes with a 60” tree strap and a steel buckle, brass set tripod mount and a built-in spot for a cable to lock your camera to the tree.

This is truly the simplest camera we have ever tested here at Sportsman’s News and it has performed flawlessly during all of our testing. We have five or six of these cameras in our arsenal and have for over two years, with all still going strong. It is priced significantly less than many cameras on the marked that don’t perform as well and they are built to last.