As a young boy, I made countless trips to the trap and skeet range with my grandfather and other family members. The arsenal of fine shotguns was something that stuck in my head for the life of my childhood. My grandfather was a world champion skeet shooter in the mid 1950’s and was the envy of most of the guys at the club. I occasionally got to shoot with the group, but I wasn’t ever fortunate enough to be able to grab one of those really nice guns off the rack. I was allowed to shoot the old beat up pump gun I had been handed down. Occasionally I was allowed the pleasure of cleaning some of those high-end shotguns before we left the range while the old codgers settled up their bets over a cold beer.

As a Marine, I still enjoyed the sport of trap and skeet as well as the newly launched activity of sporting clays. This simulated different shots you would actually see in a hunting environment and I was a natural at it. However, I was still doing it with hand me down shotguns. As anyone who knows about the pay structure of our hard-working military men, you don’t quite get enough every two weeks to live on, let alone buy a luxury shotgun.

Browning must have heard my sob story or that of many other shooters and designed an over/under shotgun in the Citori CX version. This is a shotgun that doesn’t compromise on the quality of Browning and the century plus of history in building dependable firearms. This series gives you a high quality over/under shotgun that can be had for right around $2,000.

The Citori model has been around for a long time. However, the CX or crossover version of this hit the market only a few years ago. It has some great features that are totally designed for those of you who are interested in trap, skeet, and sporting clays. Don’t be fooled though, this shotgun is right at home in the dove fields or corn stubble of South Dakota. 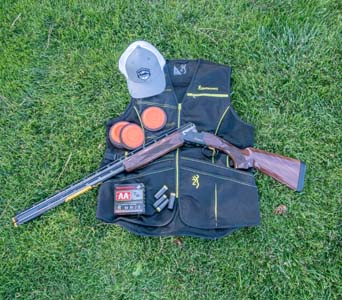 Out of the box, the sheer beauty of this shotgun makes it appear much more expensive than it really is. The gloss finished grade II walnut stock makes one a bit apprehensive to carry it in the field and I will guarantee the first scratch you put in it will bring a tear to your eye. The receiver is blued highly polished steel with the Citori CX in gold inlay as well. It comes in 12 gauge and has the choice of either 28”, 30”, or 32” barrel. If you shoot more skeet than anything else, I would recommend the 28” barrel. If sporting clays is more your thing, I would highly recommend the 32” barrel. The 30” is just a good all-around barrel for the clay sports and hunting and does save a few ounces on weight. The high post vent rib is specifically designed to give you a slightly higher center point of impact. This means that 60percent of the load is above the center of the barrel and 40 percent is below. This is extremely beneficial when shooting nearly every clay target discipline. When the clays are launched from the thrower, they are usually always gaining height. This raised rib setup with dual ivory beads helps you get the center of the load on top of the target. The 3”chambers will accommodate both 3” and 2 ¾” shells. They are chrome-plated, which will extend the life of the shotgun, especially if you are getting those barrels fairly hot and forget to clean the shotgun soon after these events. The condensation from heating and quickly cooling will cause a chamber that isn’t chrome to rust. The shotgun comes with three Midas grade extended Invector-Plus choke tubes in full, medium, and improved cylinder. The Browning Vector Pro lengthened forcing cones helps to keep the pattern more uniform as it enters into the choking process. The triple trigger system can be adjusted to provide you a fitting length of pull based on your size. Additional triggers may be purchased direct from Browning to accommodate those with a different personal preference of wider trigger, smooth, etc.

Overall, this shotgun is a fine work of art and we have put it to the test with all the specific disciplines at our nearby range. I shortened the pull up about half an inch to give me the fit that I like. We started out on the skeet range with I/C tubes and the #8’s were powdering clays left and right. The 30” barrel on our test gun made station 8 a bit difficult, but after a few misses, I got the feel of the longer barrel and was being showered by black dust. Onto the trap range and this gun flowed to my shoulder from the ready position unlike any shotgun I’ve had at the range. Although trap isn’t one of my strongest disciplines, I was breaking significantly more targets as well as totally powdering them, which I’m sure is because of the high vent rib. To round out the weekend of testing, we shot several rounds of sporting clays. The weight of this shotgun and the balance makes tracking all the targets almost effortless. Even in 15 MPH wind, I was breaking more targets than I usually do.

I can honestly say that the Browning Citori CX crossover shotgun is a great addition to the arsenal. All of this exciting experience was captured for a full video product review on this exact shotgun. If you are in the market for your first over and under, this Browning definitely won’t disappoint.