Tracer ammunition is a great way to visually follow the path of a bullet after it leaves the gun, but it can also light the surrounding countryside on fire if conditions are just right. Ammo Incorporated has solved this problem by creating a non-incendiary visual ammunition called Streak.

Using a One Way Luminescent (OWL) iridescent paint on the base of the bullet, not only have they eliminated the fire danger, but they have also created a tracer round that is only visible within a 30 degree arc of the shooter. This allows visually indicating ammo to be deployed downrange without giving away the position of the shooter. The luminescent paint is excited by the flash of the powder during ignition, and only needs a fraction of a second to set it aglow. Since the bullet travels fast enough to be on target in an instant, this quick charge and short glow time is sufficient to create a visible streak of light. 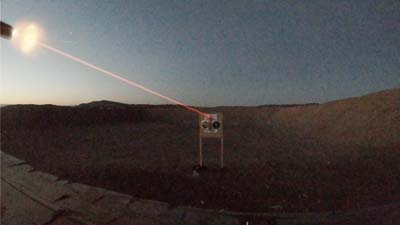 We fired a lot of this ammo, and because of limitations in camera speeds, it took a while to capture a good image on video that would allow us to grab a frame. With the naked eye, in twilight, every round was highly visible as it traveled downrange. It looked a bit like a shot from a Star Wars blaster as it screamed toward the target. The red line showed us the precise flight path of the bullet so we could easily follow it.

For some real fun, we loaded every fifth round into a magazine of a Gatling gun, and it was so much fun to watch the tracers following one another downrange in the dark. 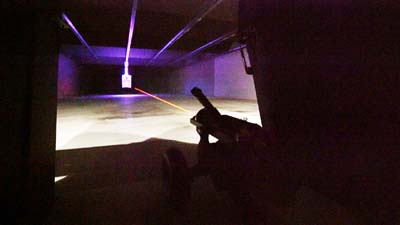 Our first concern was that the paint used on the bullet base would present serious fouling concerns in the guns, but we found that not to be the case. While we had one or two of the painted dots come off in the air, none of them detached in the gun. In fact, the HyperClean technology employed by Streak meant far less residue buildup and the guns ran much cleaner than most target ammunition. We even managed to fire dozens of rounds through a suppressor, and there was very little in the way of fouling to clean out afterwards. 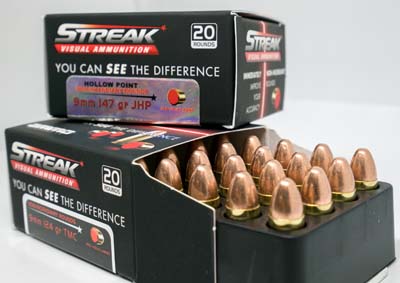 The Streak Ammunition comes in the majority of pistol calibers and weights, so it is likely available for your gun. It also comes in both TMC and FMJ configurations, with a fully-functional controlled expansion jacketed hollow-point, so it can be used for target shooting, hunting, or self-defense. The JHP 147-grain 9mm provides an advertised muzzle velocity of 1,000 fps but we don’t know what length barrel those were measured from. We were only achieving around 925 fps, which put them into the subsonic range for our high altitude. Perfect for suppressed shooting. Advertised muzzle energy is 326-foot pounds, but we were getting 279 foot pounds and change out of our Glock 17 with a 4.5" barrel.

Overall, the Streak Visual Ammunition performed flawlessly and was visible in low light. It was hard to see in full daylight, but it is hard to make something glow brighter than the sun. We had difficulty seeing traditional incendiary tracers in full daylight. You can see them, but they aren’t all that impressive. For this reason, Streak labels each box as for indoor range and nighttime shooting. Even if you don’t have a tactical or practical reason for shooting them, they are just a lot of fun to shoot. They tend to run about the same price for a box of 20 rounds as a standard box of 50 rounds of regular ammo, so they are affordable to shoot, especially if you are loading every third or fifth round into your gun. Sportsman’s Warehouse has a wide variety of calibers and loads for you to add to your practice session or for hunting and self-defense.