When Leupold designed its award-winning VX-5HD, the company set out to redefine relentless versatility. The riflescope line was given a wide magnification range, ensuring that hunters and target shooters alike would be able to adapt to any environment. Beyond that, the Twilight Max HD Light Management System would deliver class-leading low-light performance. Rugged and reliable, the VX-5HD is ready for any adventure, and consumers have made it one of the most popular scopes in the industry. For 2019, Leupold decided to up the ante and add to the VX-5HD line. Among the new entries: a 7-35x56mm model that’s purpose-built for the long-range precision shooter. 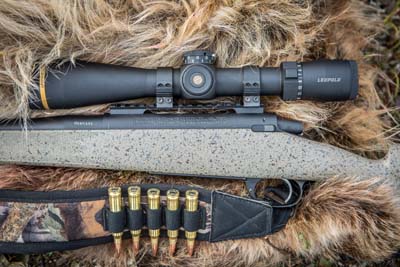 The VX-5HD line – which has been named “Optic of the Year” by Guns & Ammo and embraced by consumers around the globe – features a 5x erector assembly, fitting perfectly into Leupold’s line up between the VX-3i and the VX-6HD.

“When we designed the VX-5HD line, which featured magnifications of 1-5, 2-10, and 3-15, we were working to build a scope that suited any potential need a hunter or recreational shooter might have,” said Vici Peters, Product Line Manager for Leupold & Stevens, Inc. “The addition of the high-power 7-35 model ensures that. They deliver the long range performance demanded by many serious shooters today, and a handful of new features that target shooters have been asking for since the original line launched.”

Leupold took what it was already doing well with the VX-5HD – namely its performance in low-light scenarios and consistent, reliable tracking – and tricked it out with new features that are targeted towards the long-range market. We’ll get to those. First, let’s talk about the game-changing Twilight Max HD Light Management System.

Get behind a VX-5HD and you’ll see the difference. Every scope in the line offers superior edge-to-edge clarity and extreme low-light performance. Leupold’s Twilight Max HD Light Management System delivers the perfect balance of image color and contrast, light transmission, and glare management. Most scopes only focus on transmitting high percentages of midday light, but the VX-5HD gives you maximum transmission of the entire visible spectrum. Why does that matter? The human eye is most sensitive to colors outside the middle of the spectrum during dawn and dusk, when game is on the move. Superior glare reduction, meanwhile, ensures the maximum amount of usable light gets to your eye. Point being: you’ll see more in less light. The Twilight Max HD Light Management System adds up to 30 minutes of extra shooting light and eliminates 90% more glare-producing stay light than its competitors. Whether you’re ringing steel on the range or looking to knock down a trophy bull, you’ll be well equipped to deal with any low-light scenario that might come your way. 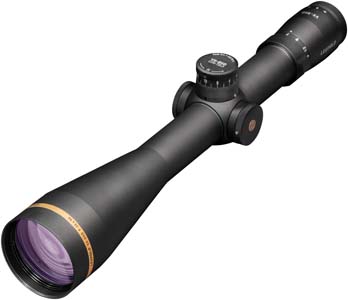 New to the VX-5HD 7-35 is the CDS T-ZL3 dial. At its core, the CDS T-ZL3 elevation adjustment takes target style adjustments to a new level with a push-button locking feature and an easy-to-read revolution indicator. A 3-turn, target-style dial, the CDS-T-ZL3 delivers 20 MOA per revolution in ¼ MOA clicks and has a lock button revolution indicator. It allows for precise movement, tracking, and return to zero. When paired with the intuitive TMOA or Impact-14 reticles, it’ll help take your long-range precision to a whole new level.

Like every riflescope offered by Leupold, the VX-5HD is designed, machined, and assembled in Beaverton, Oregon – and it’s built to withstand a lifetime of abuse. The VX-5HD features Leupold’s proprietary gas blend, which nearly eliminates the effects of thermal shock, and reduces the diffusion of gases sealed inside your scope even more than the company’s proven nitrogen technology already does. Each of Leupold’s riflescope models is “Punisher” tested and capable of withstanding whatever you might be able to throw at it. That said, if you ever do have a problem, know that the VX-5HD is backed by Leupold’s legendary Lifetime Guarantee.

Check out the Leupold VX-5HD at your local Sportsman’s Warehouse today.