Innovation is at the very core of the American spirit. It’s what inspired Marcus Leupold – son of one of the company’s founders, Fred – to decide to build a riflescope of his own over 70 years ago. That spirit still thrives today at Leupold, and is embodied tenfold in the company’s award-winning VX-Freedom line of riflescopes. You want relentless reliability? The VX-Freedom delivers it. You want elite optical performance at a price you can’t ignore? Consider that box checked. You want to unleash your rimfire rifle, dominate from any tree stand, or tag out across an open draw? The VX-Freedom has you covered.

Best yet: New for 2019, Leupold has announced the addition of four new models to the VX-Freedom line – including models with illuminated reticles, 30mm maintubes, and more. The new lineup is meant to deliver even more usability to the already relentlessly versatile VX-Freedom family. Two of the new models incorporate FireDot illumination, while two more deliver greater magnification than previously available. All four offer 30mm maintubes.

“The VX-Freedom line has been designed from the ground up to deliver the versatility and performance that hunters and shooters have come to expect from Leupold,” said Vici Peters, Product Line Manager for Leupold & Stevens, Inc. “The addition of illuminated reticles and greater magnification range to the line provides our consumers with even more options when selecting a riflescope for their favorite activity – all at a tremendous value.”

Both new illuminated options feature 30mm maintubes and a fast-focus eyepiece – one is a 3-9x40 with an illuminated FireDot Duplex reticle, the other a 3-9x40 AR model with a .223 ballistic dial and milliradian turrets to run alongside its FireDot Tri-Mil reticle. Designed to help you settle your point of aim over your target faster, regardless of environmental conditions, the FireDot reticle delivers game-changing illumination at an amazing price point. New 4-12x40 and 6-18x40 scopes, meanwhile, have a 30mm maintube, a Tri-MOA reticle, and Leupold’s Custom Dial System (CDS) feature. Both models also have a side-focus feature, allowing for more rapid, convenient parallax adjustment at long range – allowing you to further stretch the capabilities of the ever-versatile Freedom line.

Two of the key features offered in the 30mm VX-Freedom riflescopes are the CDS (in the high-magnification Freedom scopes) and Motion Sensor Technology, or MST, in the illuminated models.

Leupold’s one-of-a-kind Custom Dial System (CDS) makes accurate long-range shooting this simple: range your target, turn your CDS dial to match the range, aim dead on, and then squeeze the trigger. With a CDS dial and some practice, you can shoot farther and more accurately than ever before. Here’s how it works: Leupold customizes your scope’s elevation dial to match your exact load, velocity, and even the average atmospheric conditions where you hunt for unprecedented precision. With your CDS dial, you’ll easily compensate for bullet drop and make ultra-quick adjustments on the fly without having to worry about holdovers. You can even create multiple dials for the same riflescope to match different loads or different conditions. A free CDS dial is offered with the purchase of any CDS-ready riflescope, and extra dials are available for a nominal fee.

The illuminated VX-Freedoms, meanwhile, maintain Leupold’s Motion Sensor Technology (MST), which puts the FireDot reticle into a battery-saving standby mode after five minutes of inactivity. When the MST detects motion, it instantly activates the sight, so it’s ready when you are. A manual mode allows the sight to be shut off when not in use – like when you’re posted up on a ridgeline waiting for a deer, or when your rifle has been returned to its place in your gun safe. As soon as the MST senses movement, your FireDot reticle will be good to go. 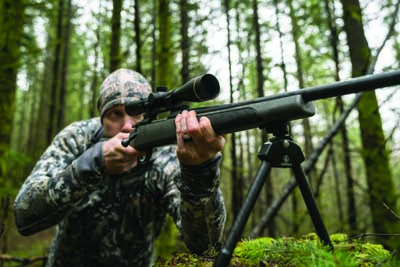 Free Yourself from Sub-par Performance

The VX-Freedom line, mind you, is designed, machined, and assembled right here in the U.S.A. with one purpose in mind – to give you the freedom to put a Leupold on any hunting rifle, .22, AR, or long gun you own, knowing it will perform for a lifetime. Only a company with Leupold’s history and engineering expertise could deliver an American-made optic that boasts performance and affordability like the VX-Freedom. You’re looking at best-in-class optics – crisp, clear images with unmatched edge-to-edge clarity.

Did we mention that you’ll be able to see the previously unseen? It’s no secret that the first and last 20 minutes of any big game hunt are often the most crucial – it’s when the animals are most likely to be up and moving and when you’re most likely to get a shot. Thing is, that’s also when there’s not much light to work with, and you can’t hit what you and your riflescope can’t see. That’s why the VX-Freedom line incorporates Leupold’s Twilight Light Management System, a proprietary lens coating system that increases the amount of usable light that reaches your eye. Translation: Your optic will still be able to see Bullwinkle during those last five minutes of legal light even if your naked eye can’t.

The VX-Freedom series is everything you’ve come to expect from a Leupold optic. It’s tested to the very same ruggedness standards as our top-tier riflescopes. It’s also backed by the Leupold Full Lifetime Guarantee because we know you’re going to put it through the paces.

At the end of the day, you don’t quit, and you don’t back down. Neither should your optics. Epic moments don’t create themselves. With Leupold’s new additions, the VX-Freedom line is delivering the versatility you’ll need – the versatility you’ve been asking for – in the field. All at one of the best value price points on the market.