The Revolution E-Caller by Lucky Duck

Predators, snow geese, crows and more is what you can expect to deceive with Lucky Duck’s E-Caller, “The REVOLUTION”. I have spent several days in the field putting this product to the test. This call, with its high-quality sounds and amazing extras like built-in video camera and full rotation capabilities, make this one of the top calls on the market. 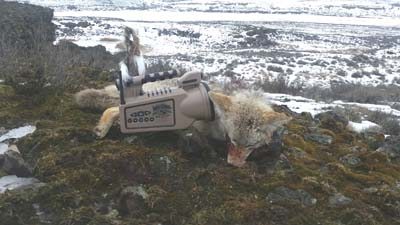 I started off calling in predators. On my very first set, a few howls from The Revolution and a pair of coyotes came right in from less than 300 yards away. I was able to put a nice dog on the ground. A pretty good result for the first time out. On my second set I used a variety of howls and locators and was happy at the quality and clarity of the sounds, even at high volumes. The Revolution goes from 1 to 32 in volume control. It also has a gain setting of 1-3, allowing you to change the gain for different sounds to avoid any distortion. It is hard to find a good call these days that sounds great and doesn’t distort at high volumes. 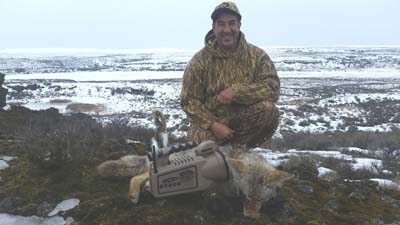 On the second day, I went out to use the call and once again on the first set, was able to call in three dogs. With the use of a decoy, the first yote came to within 20 yards before meeting his end. Being the expert marksman I am, I missed the second one at about 150 yards, not once, but twice. They don’t call me sure-shot for nothing. On this set, I was in heavy timber, with only small shooting lanes. I called non-stop for about a full 30 minutes, mixing it up between coyote calls, birds in distress, raccoon in distress and crazy rabbit calls. The constant calling and continuing to mix up sounds was too much for the trio of coyotes.

The Revolution comes with 100 preloaded animal sounds, found in 17 folders for quick reference. The display on the remote control is very easy to read and the buttons are easy to work. As an avid predator hunter, I have a vast array of personal calls I like to use. Adding them to The Revolution was as simple as removing the SD card from the call, popping it into my computer and then adding the folders to the SD card. My folders showed up on the remote display and played with no issues. Up to 2,000 calls can be used. The Revolution will play; .LD, .MP3, .wav and .wma files, giving you many options to add more sounds.

The manual states the call will work up to at least 100 yards. I tested the call personally out to 300 yards with line of site and the call performed with no issues. I was impressed with the sounds from 300 yards away and that the remote was able to work as promised. 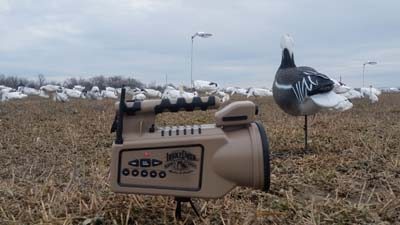 My next test was to head to Idaho and try The Revolution against snow geese. Not being an expert snow goose hunter or caller, I relied on my waterfowl hunting guru buddy, Richard Skuppin, to give me the low down on the sound quality and the use of the call. After hearing the five snow goose calls that come standard on The Revolution, he stated they all sounded realistic and would work. As you can see by the pictures, The Revolution once again did its job in helping me be a successful hunter.

One of the most unique features about The Revolution is its ability to make a full 360-degree rotation, all from the remote. The magnetic tri-pod legs that you place on the bottom of the call, allow it to spin based on the way you would want the call to point. This feature is not only great for predators, but was very useful for snow goose hunting. By allowing the call to rotate in a constant circle, it gave the snows above the appearance that sounds were coming from every different direction. This is also a great feature when hunting predators. Once you place the call, say at 50 yards from your location, you can always jump up and turn the call a different direction. With a push of a button, you can rotate the call the direction you desire. 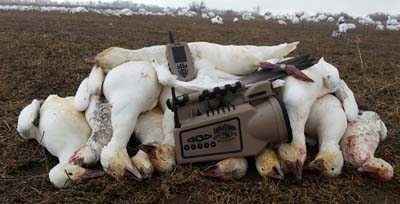 Another cool feature of The Revolution is the built-in HD video camera mounted inside the housing, at the front of the call, above the speaker. From the remote, you can snap pictures or take HD video all with the push of a button. This feature allows you to capture a predator coming to call/decoy or take pictures of your location to remember your setup. Just simply remove the SD card when you get back and pull the pictures and video off. I was able to take pictures and video and review both on my computer after each and every hunt.

I have to say that after putting this call to the test, I would recommend “The Revolution” by Lucky Duck. It has all the standard features of most e-callers: aux port, favorite buttons, built-in removable decoy, remote, rechargeable battery for caller (not remote), standard AA batteries, exterior speaker port and more. Lucky Duck has gone above and beyond with its special features like the ability to rotate the installed HD video camera that allows me to give this call my highest recommendation. It provides the tools for the average hunter as well as experts to become more successful in the field. Stop by your local Sportsman’s Warehouse today and pick one up.