Over the years, I’ve tested a lot of packs from a number of manufacturers and after using bags designed for almost every and any purpose, I’ve seen a lot of really interesting concepts and designs, but none as useful and in its own class like the Trophy X Pack from ALPS OutdoorZ. This pack, which really isn’t what you would call a traditional “pack”, uses a simplified frame design similar to that of their Traverse X packs, but stripped down to only the frame and focuses on a no-nonsense approach to getting your meat and supplies out of the back country as efficiently as possible.

The most significant aspect of this frame pack that caught my attention has been the frame itself. The powder-coated aluminum frame quite literally sticks out and is the foundation of this pack that provides the necessary strength and rigidity to get those large loads of meat back to the truck. The frame also includes a freighter shelf to help hold the load on your back. I’d feel comfortable carrying 100 pounds or more on this pack without a doubt.

The ingenious of this pack doesn’t stop there, because ALPS has been able to add their adjustable molded foam suspension and Lycra shoulder straps to the frame, meaning that this pack is designed with comfortability as one of its strong points. Having this molded foam support really gave me confidence when testing this pack because even though some packs can hold weight similar to the Trophy X, they would either suffer from being uncomfortable on the back, hard to adjust or just plain awkward to walk with. A great feature of this molded foam support is its adjustability. The pack has an adjustable torso range, which means this pack can be custom fit for anyone. It’s this feature that really sets the Trophy X apart from other frame packs.

Another thing that really surprised me was its lightweight aspect. The pack when empty weighs only 5lbs. 6oz., much lighter than I would’ve anticipated for a rugged frame pack like this and since it is so light, it makes this pack much easier to bring on those hunts where every ounce counts. This pack also features ALPS’s Robic Nylon fabric, which is a super strong synthetic material used in the tie down straps for the Trophy X. These straps are featured all over the pack to give you plenty of options for securing your load and the pack even includes extension lashing straps if you need them. 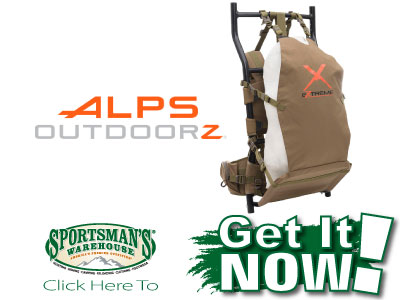 The waist belt on the Trophy X is exactly like the one you’d find on a full-featured hunting pack, meaning that you have pockets to hold small items and anti-sway straps to keep the bag secured to your back. The Trophy X will also accommodate clip-style holsters for carrying a pistol or bear spray in the backcountry.

The Trophy X pack is an incredible addition to the ALPS hunting pack family and it makes hauling your trophy out of the backcountry easier than ever. Your new Trophy X will turn that grueling hike back to the truck into a walk in the park.