Fun to shoot. Plenty of punch. Less recoil. Higher capacity. The Aguila Mini Shells provide many reasons to shoot, but at the end of the day, the biggest consideration for me was the ability to load more into my magazine without sacrificing performance.

These tiny, inch-and-three-quarter shells provide all of the versatility we love out of a shotgun, but because of their diminutive size, they take up less space, have lighter recoil, still deliver enough lead on target to be effective for hunting and home defense or just having fun with our smoothbores without taking the abuse that longer shells deliver. 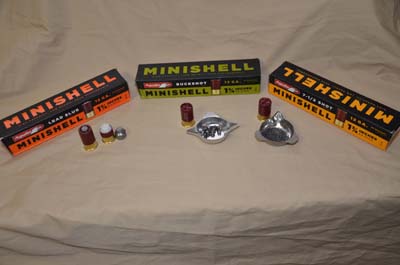 Off the bat, there have been some warnings, including from Aguila, that the Mini Shells may or may not reliably feed in some pump guns. You need to try them out to see how they work in your gun. One gun that seems to really like them is the Keltec KSG. With the ability to double the capacity of the KSG, which normally holds twelve 3-inch shells, I may seriously look at adding one to my arsenal.

They definitely don’t have enough oomph to cycle the action on a semi-auto. Aguila recommends them for use in side-by-sides, over/unders, and single shot shotguns. But, being the stubborn human that I am, I decided to test them in my old Mossy 590 to see how they fed and also found two adapters that claimed to increase reliability of these shells in pumps.

The first adapter I tested was the Ralph Hollister Aguila MiniShell Adapter for Mossberg. This snap-on nylon clip only works on Mossbergs and ran me a whopping $14.95 with shipping and tax. It has marginal success with feeding the Mini Shells reliably and ultimately, the gun fed just fine without the adapter, so my suggestion is to try the shells in the stock gun before you try an adapter. For my 590, this product actually degraded performance and reliability. 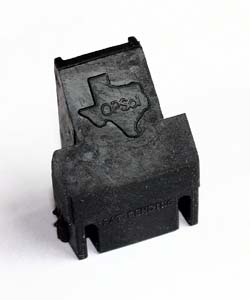 The next product I tried was the OPSol Mini-Clip, a $15 part I found online. Essentially it is a rubber feed ramp plug that acts as a backstop to the shell to keep it forward as it feeds into the chamber. This worked 100 percent, with about 200 rounds of 7 ½ birdshot, buckshot, and slugs. The one downside, is because it is just rubber and is held in place by nothing other than friction, it tends to slip out of the feed port over time and several minutes were spent searching the ground for the little booger. Perhaps a harder orange rubber, with slightly tighter tolerances, would have helped keep it in place and also made it easier to find when dropped. Despite these minor hiccups, I was very pleased with its performance.

All said, the Mini Shells fed in my Mossberg 590 just fine without any adapter. I had one failure to feed and one failure to extract out of 200 rounds, which is about average for my gun with full-length, 2 ¾-inch shells. 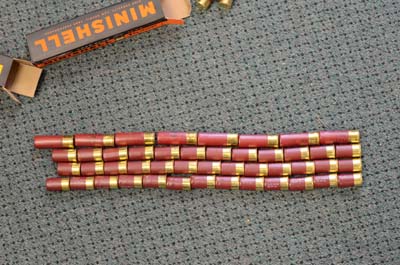 Because they are so much shorter than standard 2 ¾-inch shells, I was able to load almost twice as many into the magazine on my 590. My Mossy will hold 7+1 of standard 2 ¾-inch shells and I was able to load 13+1 of the buckshot or #7.5 shot shells into the tube. Because the slug has a small button that protrudes from the top of the projectile, I was only able to get 12 of those in the magazine and an extra in the chamber. Still, 12 or 13 rounds as opposed to seven is a real improvement in the capacity department; provided they perform as well as regular, longer shells. They did. 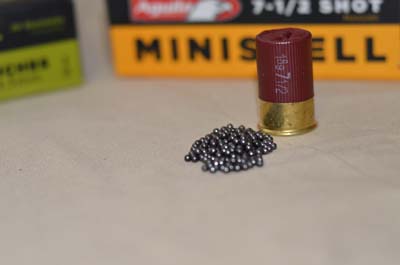 Aguila Mini Shell 7 ½ Shot
The Aguila factory in Cuernavaca, Morelos, Mexico still houses a shot tower left behind when Remington closed down their factory. That shot tower provides just a little longer drop in cooling water to provide very uniform and round pellets for use in the Mini Shells. That uniformity provides a nice, even spread of pellets. In my Mossberg with a short tactical barrel and no choke, I was seeing a fairly dense pattern of 18-inches at 25 yards. In my over/under with a skeet choke, I was achieving 24-inches from the same distance. 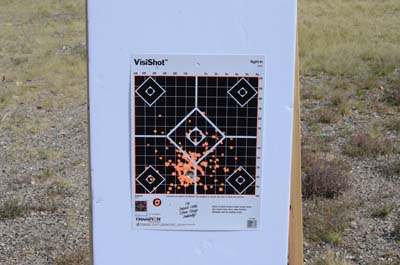 To see how this equated to performance, I took my O/U over to the Cedar City Trap Club to see how they did busting clays. Now, I will be the first to admit that I am not a sporting clays guy. I enjoy the sport, but it isn’t my area of expertise. I shot fifty birds, missing 14 with the Mini Shells. I would say that was pretty pitiful, but it was average for me, so I can’t blame the ammo. In short, it performed as well as 2 ¾” shells for busting clays. I will tell you that the amount of fouling in my barrel was slightly higher than normal, but I attribute that to less time to ignite inside the hull than with a longer shell. A quick swab with a bore mop and it cleaned right out. The best part of the Mini Shells for me, was that the recoil was similar to a 20 gauge and my arm wasn’t feeling it later. This is a great compromise for those who maybe only have a 12 gauge to shoot, but don’t want the stiffer recoil of a 12 over a 20. 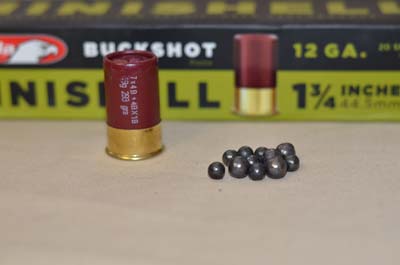 Aguila Mini Shell Buckshot
The buckshot Mini Shells are composed of a mixture of #1 (.30”) and F (.23”) buck shots with a total weight of 19.65 grams (.69 oz). They zip out of the barrel at around 1,200 feet per second and provide ample penetration of more than 16 inches in calibrated ballistic gelatin. They spread consistently to about 16 inches out of my Mossberg 590 from 25 yards. They were devastating to pumpkins and bottles of soda and I definitely wouldn’t want to be on the receiving end of them. They make a great home defense round, but don’t be mistaken in thinking that they won’t travel through dry wall. They punch right through two sheets of it and barely slow down. This is an excellent turkey load if you are trying to whack birds in dense brush or for taking coyotes at close range as they raid the hen house. 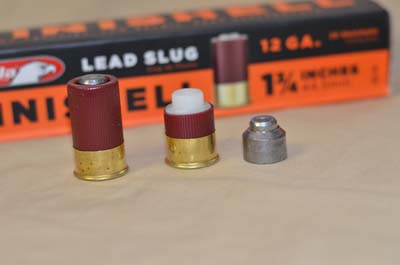 Aguila Mini Shell Slug
These little powerhouses are fun. They feature a cupped slug with a penetrator button on top and send a 25-gram (.88 oz) chunk of love at whatever you want to obliterate. The smooth slug lacks rifling to give it flight stability, but they were nose-heavy enough that they flew true and straight without tumbling. In the O/U with a rifled choke, it brought the groups much tighter. They have a velocity at the muzzle of 1,250 feet per second and deliver 1,328 foot pounds of energy on target. Because they have so much less recoil, they are a great choice for a home defense gun or for hunting, especially for girls; oh, and old guys like me who don’t like to get beat up by guns or anyone who has any sense whatsoever. If you are planning on putting a lot of slugs downrange in an afternoon, this is definitely the way to go.

All told, the Aguila Mini Shells performed very well for me and cycled reliably in my pump gun. You may have different results, but it is definitely worth grabbing a box and seeing how your gun feeds them. If your pump likes them, then you have almost doubled capacity and sacrificed very little in performance. In a double-barrel, they will do everything you need them to do without beating you silly in the process. Try them out. I promise they are a lot of fun. If you don’t like them, I will be glad to take them off your hands for you; being the nice guy that I am.

Pick up a box at your local Sportsman's Warehouse today!