Real-world reliability is the most important feature any manufacturer can build into a firearm. That’s why it was the first priority when Browning set about developing the Maxus. But reliability isn’t the whole story. The Maxus delivers 18% less felt recoil for greater comfort, 44% less muzzle-jump for more accurate follow-up shots, 19% faster bolt speed and 24% faster locktime than the nearest competitor. Unequaled reliability and features, all found in one of the finest, most reliable gas-operated autoloaders ever to swing on a bird. 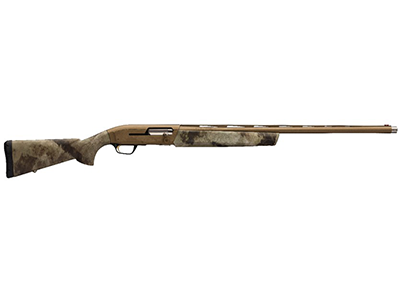 New for 2017 is another revolutionary model, the Wicked Wing (available in both the Maxus and A5 models). Now you can choose between a pair of Browning autoloaders with custom touches to make them stand out — in a good way. Wicked Wing autoloaders feature a Cerakote Burnt Bronze camo finish on the receiver and Burnt Bronze on the barrel. And to further satisfy those specialized hunters, Wicked Wing models are available in A-TACS AU, Mossy Oak Bottomlands and Mossy Oak Shadow Grass Blades (with the A5 also available in Realtree Max-5) finishes.

Speed and reliability are the key words for today’s autoloaders and the engineers at Browning have done an excellent job of both. This gun looks fast, starting with a sleeker, thinner profile than any other gas autoloader. 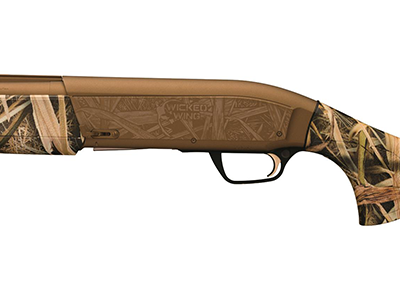 Browning’s Maxus is made from a lightweight aluminum alloy that allows each model to come in under seven pounds. It has a lengthened forcing cone and has three adjustable chokes, so shooters can adjust a desirable shot pattern for short or long distances.

Looking at the fore-end, you will immediately notice the absence of a screw-on end cap. The Speed Lock Forearm is one of the most innovative features found on the Browning Maxus autoloader shotgun. A simple lift of a lever allows you to remove the forearm with a flip of your finger. The simplicity of this system allows the fast removal of the fore-end: no more over-tightening and having to use a pair of pliers and a rag to take your fore-end off or under-tightening and dealing with a rattling gun. 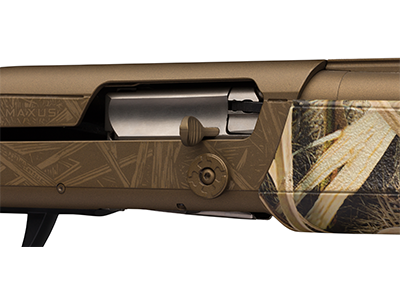 As for its action, called the Power Drive Gas System, it is essentially a re-vamping of the action shared by the Browning Gold and Winchester Super X-2. Years of extensive research, prototyping and testing have resulted in a new gas piston that has been designed to be more reliable in all conditions, fire a wider selection of loads, reduce recoil and cycle shells faster. The new Power Drive gas piston features large exhaust ports that effectively dump gases faster on heavy loads, while the piston has an approximately 20% longer stroke for superior reliability with light loads

How is it on the shoulder? Browning added an advanced soft-rubber recoil pad with what they refer to as “Inflex Technology” to the rear of the Maxus. This pad, combined with the new action translates to one of the softest-recoiling guns on the market, easily handling the hardest-kicking 3.5” shells down to light, 1-ounce skeet loads. It has no trouble on the range or in the field, even when purposely mixing loads.

The Maxus is available in several models specified for waterfowl, field and sporting use. Any one of these is sure to please and from my experience, the Maxus is one of the best all-around guns on the market today. If you are looking for a shotgun that can cover all of your needs, Browning’s Maxus just might be the one for you.