Having an inexpensive-to-shoot clone of your carry gun provides a great deal of versatility in training with your defensive tool. Since people tell me that the Glock 19 is the most popular gun for concealed carry, it only made sense for Glock to offer their first rimfire pistol in this popular format. I have no hard data on how many people carry a Glock 19 versus other guns, but based on the wide availability of accessories, holsters, and modifications for the Glock 19, I think it is safe to say that if it isn’t the most popular carry gun for concealed carry, it is definitely in the top five. 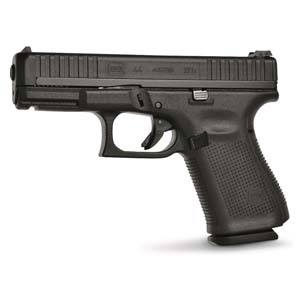 We first fired the G44 at the SHOT Show Industry Day at the Range like most of the other gun writers out there. I am never willing to write a review based on 10 rounds through a gun, so we decided to get one in-house and do a thorough test of this new pistol. Rather than wait in line for a writer’s sample to become available, and since the selling price was so reasonable, we just hopped on down to the store and bought this pistol outright. Well, Michael Deming did, because I also think he really wanted to own this one, and he didn’t want to have to send it back to Glock. This gave me an opportunity to really put this little pistol through some strenuous testing.

I have gotten a bit of a reputation in the industry for being that guy who breaks new guns. The reason for this is that I tend to test each new offering to its extreme edges, feeding it some of the lightest and hottest ammo available on the market and burning through vast quantities of ammo in the testing process. All of the ammo I use i factory loads available to consumers and not proof loads or custom concoctions I create on my loading bench, but sometimes that stuff for sale in stores can make guns come apart. 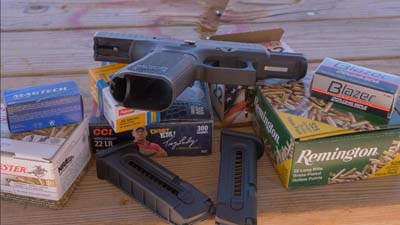 Having already heard some issues with the gun and even watching a video of the gun blowing out the extractor and cracking the slide, I was pretty wary that the G44 might have some issues that could cause the gun to catastrophically fail during testing. So it was with some trepidation that I selected a wide range of ammo from weak sauce Remington Golden Bullets in 40 grain, which are notoriously known for frequent failure to fire, to Aguila Super Extra 40 grain standard velocity coming out of the barrel at 1,130 FPS. In between those two extremes were some CCI Mini Mag 36 grains, that I had been told were having a hard time cycling the gun; some Magtech 40 grain; some CCI Mini Mag 40 grain with red, white, and blue polymer coated bullets; and cheap and dirty CCI Blazer 40 grain. Finally, I ran some of the cheapest ammo on the planet through the gun, Winchester white box, after it was good and filthy.

Before I reveal the outcome of the testing and my thoughts on the pistol itself, let’s look at some of the stats. The G44 is Glock’s first entry into the commercial rimfire market. As I mentioned before, it is the same profile and footprint of the G19 Gen. 5 pistol. The first difference you will notice is the weight of the G44. The G19G5FS weighs a decent 23.63 ounces with an empty magazine. The G44 comes in at an impressive 14.64 ounces with an unloaded magazine. That 9 ounces is definitely noticeable when you pick it up. This reduced weight is achieved by making a hybrid slide that is partially polymer and partially steel for added strength without the weight. Otherwise, the G44 is identical to the G19, and we even tried swapping frames to see if they were the same frame inside. It doesn’t work, thanks to a slight difference at the locking block. Otherwise, the trigger is the same, the interchangeable grips are the same, and the feel and ergonomics are identical. If it weren’t for that diminutive hole in the front, you would be hard-pressed to tell the difference between the G19 and the G44 when looking down the barrel, that is if you were a bad guy on the wrong side of the gun. This means that all of your Glock 19 holsters, magazine pouches, and other accessories will work on the G44. The magazines can even be inserted into each other, though they won’t cycle or fire. It is cool for practicing rapid magazine swaps as it gives you a couple of extra unloaded magazines to practice with. 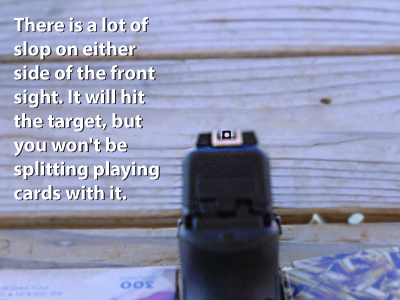 One area that I really despise about Glocks is their crappy plastic sights. The G44 is no exception, and I really struggled to get a precise sight picture because there was so much slop between the rear and front sights. However, one thing that the G44 has that is missing on the G19 is the G44 comes with adjustable target sights that allow you to use tiny screws to drift them for both windage and elevation. Still, the first upgrade I make with every Glock I purchase is to immediately replace the sights. 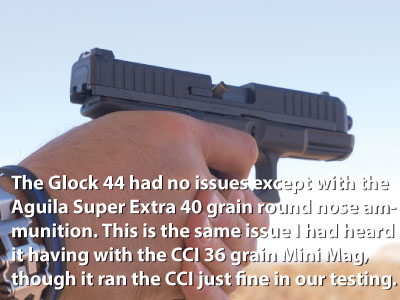 So how did it shoot? No surprise that it easily fed, fired, and extracted everything I fed it with the exception of the Aguila Super Extra. It was failing to extract and feed those with nearly every shot and we got some serious jams with the Aguila ammo from two different boxes. I did find that my big Shrek hands kept hitting the slide lock, preventing the slide from holding open on an empty magazine, but once I realized the problem and tucked my thumb, it locked open every time. Accuracy was decent and I attribute the wide group to the dismal sights and my not being as comfortable with that 22° off-90 grip as I am with the more standard 18° grip of most other gun models. I was able to find my rhythm at about 1,500 rounds in and tighten my groups up afterwards.

After about 750 rounds with the G44, I quickly switched over to a magazine of 9mm out of the G19 and it surprised me how much louder it was, but the recoil was not much stiffer, in part thanks to the heavier mass of the slide overcoming the felt recoil. Because they are so similar, if you don’t pay attention, you can forget which one you are about to fire. Until the noise difference reminds you. As for the trigger, it is the standard Glock trigger with the center safety blade and breaks at right around 5.5 pounds or the 26 Newtons that Glock advertises for both the G19 and the G44. 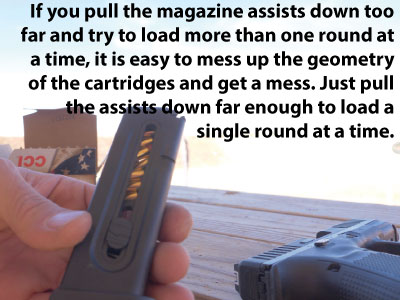 One issue we did discover is that you have to pull down on the sides of the magazine load-assists just far enough to load a single round at a time. If you pull the load assists down too far and drop several rounds into the magazine, they will bind up and not feed properly. Glock warns about this and it is easy to go too far and mess up the geometry of how the cartridges stack inside the magazine. One other thing I kind of was displeased with is that the magazines only hold 10 rounds instead of the 15 held in the G19 magazine. I hope that Glock will offer 15-rounders in the future. 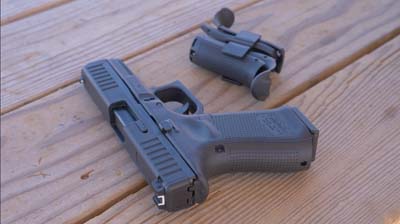 All told, the Glock 44 is a great-shooting little gun, very reliable, and everything you expect from a Glock. The ability to practice with it without the excess noise and recoil, lower cost, and using the same holsters and other accessories is a real plus and will let you practice more frequently without retraining your muscle memory. This is what I see as its greatest asset. It is also adjustable to those with different-sized hands by attaching one of the four interchangeable grips, so it is a great training tool or even an option for defense for those with smaller hands or greater recoil sensitivity. A .22 LR isn’t my first choice for self-defense, but it is better than nothing. With an MSRP of $429.99, and available at Sportsman’s Warehouse for $359.99 regular price, it is affordable enough to add to your practice tools and the savings in ammo will pay for it in no time at all.

These shoes fit like a glove though and really let me be confident in each step I took. Plus the roomier toe-box makes it so you can spread...